Please ensure Javascript is enabled for purposes of website accessibility
Log In Help Join The Motley Fool
Free Article Join Over 1 Million Premium Members And Get More In-Depth Stock Guidance and Research
By Billy Duberstein - Aug 10, 2020 at 7:30AM

Whether or not we’re in a recession, people still have to eat. Here are the three best food stocks to buy in August.

The food industry is in an interesting place during the COVID-19 recession. While many small restaurants are struggling right now, consumers are flocking to grocery stores, as well as familiar quick-serve restaurants with easy digital  access and drive-through capabilities. At the same time, food delivery is obviously on the rise as well.

Clearly, the industry is in a lot of flux right now. When that's happening, investors should keep focused on big food brands with staying power, scale, and favorable growth prospects. Of course, that's what one should always do, but now more than ever. In that light, here are three food-related stocks that look like good buys during August. 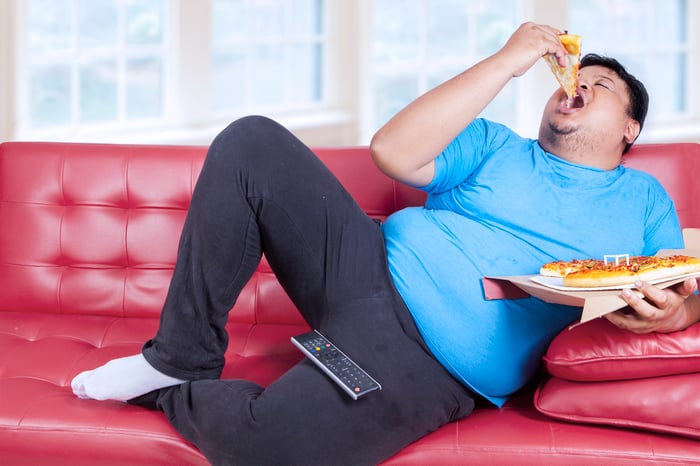 Take a bite of these food-related stocks in August. Image source: Getty Images.

In terms of long-term prospects, there's perhaps no food company with a bigger market opportunity today than Beyond Meat (BYND 0.08%). The same goes for the entire plant-based meat industry, but Beyond Meat, as the only pure play in the market today, is the best way to play this trend. According to management, Beyond Meat is also growing far faster than any of its peers.

Beyond Meat just reported its second-quarter results, a time period during which most restaurants were closed for all or part of the quarter. While that caused Beyond's food service segment to fall 60.7% during the quarter, the company's retail segment from grocery stores skyrocketed 195%, yielding a total revenue growth of 68.5% over the prior year. Looking at the first six months of the year, which included two "normal" months, Beyond's growth rate came in at 98.5%.

That's a powerful combination for growth. Although the near term is likely to be bumpy and uneven, look for Beyond to extend its leadership and grow strongly over the long term. After a slight pullback after its recent earnings report, now may be a good time to gobble up some shares. 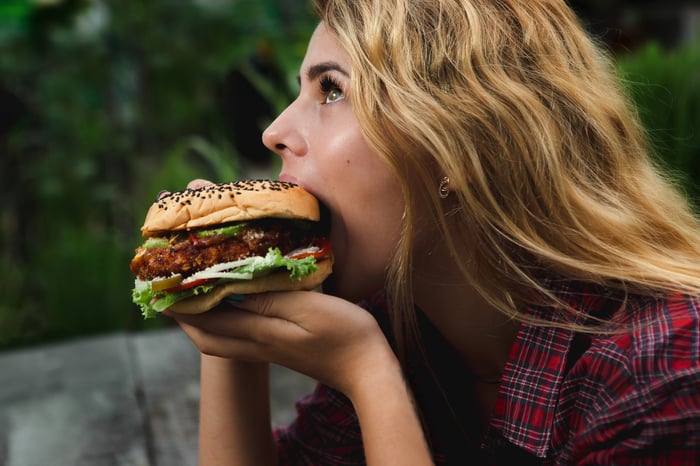 Beyond Meat's Beyond burger looks to be a hit with consumers. Image source: Getty Images.

Even though the COVID-19 pandemic is causing a substantial decline in Starbucks (SBUX 1.19%) retail store traffic, Starbucks stock still remains well below its all-time highs set back last year. In its recent quarter, in which the pandemic is hitting the Americas and Europe hard, revenue declined 38.1% and the company reported an adjusted net loss of $0.46. While those are some ugly numbers, both were better than feared, as consumers countered a 51% drop in traffic with much higher order sizes, up 23% from last year.

On the conference call with analysts, management also noted an accelerating improvement in U.S. store trends, going from a low of 65% declines in traffic in mid-April to a 16% decline exiting June. And while management didn't give specific monthly trends in China, it did note that the China recovery in the June quarter exceeded expectations.

Starbucks also isn't standing still waiting for the pandemic to end. The company recently unveiled a new store format called Starbucks Pickup for urban environments, which should greatly boost profit efficiency in expensive urban markets. Management is also rolling out a new curbside pickup experience to up to 1,000 stores this quarter, as well as a new handheld payment processor to increase throughput.

Starbucks is certainly challenged right now, but the combination of its world-class brand, digital leadership, and continuous innovation could make today a good opportunity for the long-term investor today. 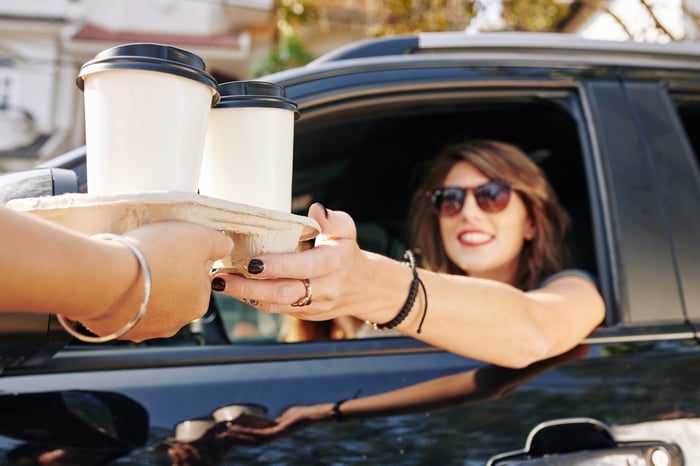 Starbucks is rolling out its new pickup formats for urban dwellers on the go. Image source: Getty Images.

It's not often that a recent initial public offering is also a value stock, but that's what you get when looking at the newly public Albertson's (ACI -2.91%). Though private-equity-owned Albertson's just had its IPO in June, the company is obviously much older, tracing its roots back to 1939. Today, Albertson's operates 20 different grocery store brands across 2,252 stores across the U.S.

As a private company, Albertson's has done a great job of expanding and investing in the business, most importantly in technology and its Own Brands private labels. In 2015, the company merged with Safeway, creating a massive nationwide grocery store network concentrated in the western U.S., as well as in the northeast and Chicago areas. Albertson's has either the No. 1 or No. 2 market share in 68% of its markets where it operates, and 60% of its local markets are forecast to outgrow the U.S. population by at least 60%. 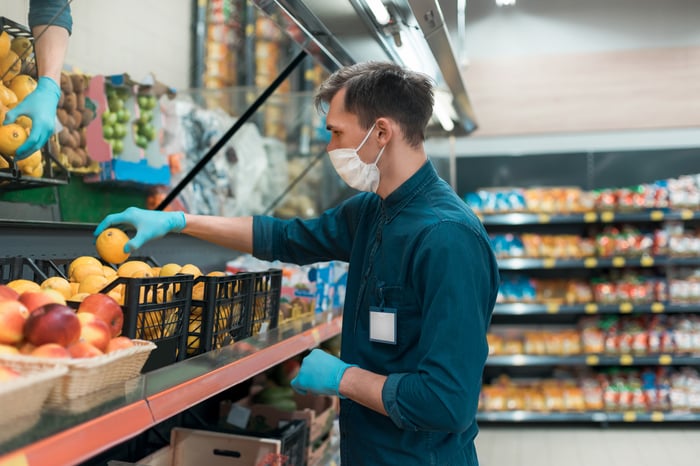 Albertson's high-margin private label brands accounted for $13.1 billion of its $62.5 billion in sales in 2019, with four brands exceeding $1 billion annually. The company has also invested $1.25 billion in technology since 2015, developing its drive-up-and-go, delivery, and rush delivery capabilities, as well as building  mini-distribution centers within its well-located stores to serve these digital orders. In fact, the company's recent improvements in these areas just won it the Supermarket News retailer of the year award in the beginning of July.

The company's results have been strong over the past few years and during the pandemic, with positive same-store sales for 10 straight quarters. That's allowed the company to generate increasing profits and margins and to pay down the admittedly sizable debt load, which has decreased from $11.6 billion in net debt in 2015 to $8.2 billion at the end of 2019. Yet that net debt load came down even further to $6.7 billion after the recent quarter ending at the end of May. As consumers flocked to grocery stores to stock up, Albertson's recorded a ridiculous 26.5% same-store sales growth, with digital sales up 276% and adjusted EBITDA up 93% last quarter.

While no one should expect those trends to hold, this cash haul did help de-risk the company at an opportune time. Meanwhile, even based on 2019 adjusted net income, Albertson's stock is cheap. At today's market cap of $8.95 billion,  the stock trades at just 14.6 times 2019 adjusted net income -- and earnings look set to rise pretty strongly this year.

Investors may not be as familiar with a newly public company, or they may be wary that the company's private equity sponsors. They still own 75% of the company's shares, and could continue selling shares in the future to monetize their investments. Still, for the long-term investor, this shouldn't matter, making this recession-resistant value stock a buy today.