The optical networking veteran partnered with a leading telecom to show off its fastest fiber-powered products over very long distances.

Shares of Infinera (INFN 5.23%) gained 33.3% in July 2020, according to data from S&P Global Market Intelligence. The vertically integrated maker of optical networking gear, from optical line systems to full-fledged carrier-class routers and switches, started this climb when an analyst said that telecom giant Verizon (VZ 0.83%) is testing Infinera's fastest solutions for a potential large-scale contract.

That analyst report was swiftly followed by a joint press release from Verizon and Infinera confirming the rumor with additional detail. The two companies have completed live fiber network tests, moving data at 800 gigabits per second over a 414-mile fiber and 400 gigabits per second in a 2,540-mile circuit.

Verizon described these tests as the foundation for the "blazing fast gigabit speeds, super low single-digit millisecond latency, and huge scalability" that will follow when the company completes its 5G network upgrades. Verizon's public support of Infinera's high-speed solutions for long-haul networks could inspire other telecoms to give the company a second look, too. 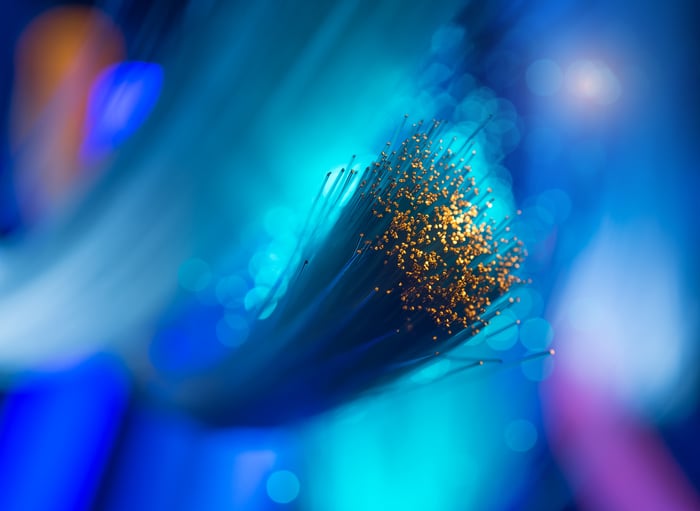 Infinera followed up on July's strong gains with a fantastic earnings report in the first week of August. Share prices rose another 15% the day of the report.

The company is not profitable, making it hard to measure its market value by simple price-to-earnings ratios. On the other hand, Infinera's trailing sales have surged 89% higher over the last three years, and the rollout of 5G networks should inspire continued revenue growth over the next couple of years. That's a classic growth stock in my book, and the 5G era should provide fertile ground for further gains.