Companies need to connect to customers at home. That means the internet.

Despite their similar performances for the month, the three stocks have had widely divergent runs so far in 2020. Wix's stock is up more than 130% year to date, while EPAM's has increased about 40%. Cognizant is far behind with a roughly 8% gain. Still, that's more than double the S&P 500's return of less than 4% so far this year.

Businesses have been hit hard by the pandemic, and they're increasingly turning to internet sales and technology solutions to reach prospective customers.

In July, COVID-19 cases surged in populous states like Arizona, Texas, and Florida, resulting in partial shutdowns of those economies. Many universities and school districts across the country announced they wouldn't be offering in-person classes in September, or even for the entire fall semester. Add to this the millions of employees still working from home, and the internet represents the best and easiest opportunity to reach a broad swath of the population. Meanwhile, tens of millions of people are still out of work; evidence suggests that some have started working on their own website or business. This situation has increased demand for tech solutions like those offered by Wix, EPAM, and Cognizant.

Cognizant's shares had been performing similarly to EPAM's for most of the month, but when it reported Q2 2020 earnings on July 29, its shares jumped ahead of the others'. Meanwhile, Wix and EPAM didn't report earnings until early August. But those reports verified the trend toward online business activity.

Wix's business solutions revenue rose by 62% during Q2 2020. On its earnings call, Cognizant downplayed its Q2 numbers, due in part to a high-profile ransomware attack that hit the company in April. However, for the first half of 2020, Cognizant's digital bookings were up 50%, compared with overall company booking increases of just 14%. Those numbers were strikingly similar to EPAM's Q2 results, which showed business information and media revenue growing 42.9% over Q2 2019, compared with 14.6% overall revenue growth from the prior-year quarter.

Despite their similar performances in July, and the similarities among their Q2 revenue gains, the market has treated the stocks very differently post-earnings, sending Cognizant's shares up 6.8% following its earnings report, and Wix's down about 8% in the days following its report on Aug. 6. Meanwhile, EPAM's shares barely budged after the company reported earnings on Aug. 7: 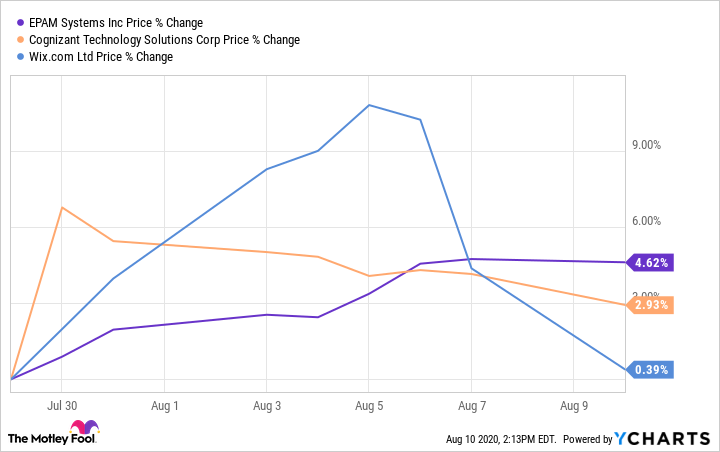 Investors were probably concerned about Wix's unexpected net loss in Q2. However, this was largely due to its striking while the iron was hot and ramping up its advertising during the quarter to attract new users to its platform. The company's free cash flow was up 52% from the prior-year quarter, to $46.7 million, so the move seems to have paid off. Management is pleased with the results and has pledged to continue its ad blitz into Q3.

Even with the recent share price drop, Wix stock has already gone up more than 120% this year, and at 15.4 times trailing sales, it's not exactly cheap. That said, it's also not as expensive as other hot players in this space like Shopify at 56.6 times sales. But Wix is projecting year-over-year revenue growth of 26% to 27% in Q3, so it certainly looks like growth is in the cards.

EPAM's and Cognizant's price-to-sales ratios are more reasonable, at 6.9 and 2.2, respectively, but Cognizant is guiding for a decline in revenue and roughly flat per-share earnings in 2020, while EPAM foresees modest year-over-year revenue growth of 8.5% in Q3, showing that when it comes to growing tech stocks, you can expect to get what you pay for.

John Bromels has no position in any of the stocks mentioned. The Motley Fool owns shares of and recommends Cognizant Technology Solutions, EPAM Systems, and Wix.com. The Motley Fool has a disclosure policy.