Please ensure Javascript is enabled for purposes of website accessibility
Log In Help Join The Motley Fool
Free Article Join Over 1 Million Premium Members And Get More In-Depth Stock Guidance and Research
By Billy Duberstein – Aug 13, 2020 at 7:00AM

Despite their recent rally, shares of Warren Buffett’s empire are still available at bargain prices.

Don't look now, but after underperforming the stock market for the first half of 2020, Warren Buffett-led conglomerate Berkshire Hathaway (BRK.A 0.35%) (BRK.B 0.40%) is up a whopping 19% so far in the third quarter.

And this stock's rebound may just be getting started. If you think you've missed the boat, consider this: Berkshire Hathaway is still 9% below its all-time highs, compared with the S&P 500, which is just 1.5% below its peak. Additionally, though from 1965 through 2019, Berkshire's compound annual growth rate was just over 20% -- much higher than the market's 10% average annual growth across the same period -- it has still underperformed the S&P 500 in both the past five- and 10-year periods, as high-flying growth stocks have overshadowed steady cash-generators like Berkshire. 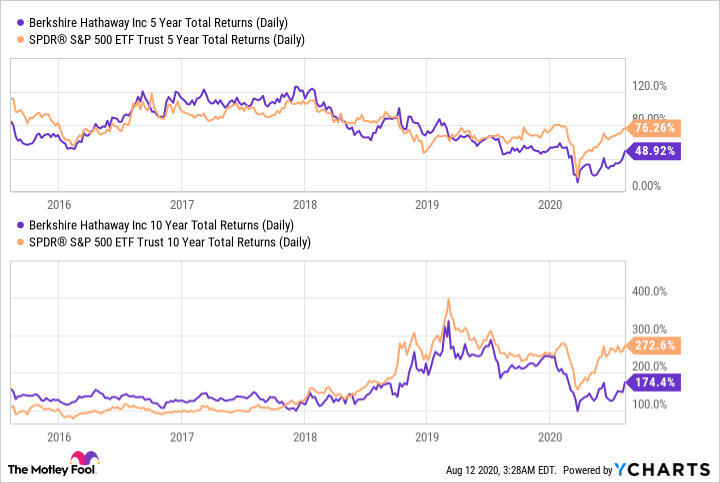 But more than comparing Berkshire's performance to a particular price or benchmark, it still appears, after looking at Berkshire's second-quarter earnings report, that Berkshire is incredibly cheap relative to its own assets and earnings power, even after its recent gains.

Berkshire is a large, complex conglomerate, so there is no single best way to weigh its valuation. Nevertheless, here's how I'm assessing the stock today. Before we delve into the earnings of its owned businesses, Berkshire has extra net cash and public investments that can be valued with a fair degree of accuracy. Subtracting those assets out leaves us with an enterprise value for its in-house businesses. A company's enterprise value is its market capitalization plus debt minus excess cash. However, for Berkshire, measuring its enterprise value is a bit more complicated. That's because a large part of Berkshire's business is in insurance. As such, Berkshire takes in premiums and invests them, but it also has insurance liabilities that it has not paid out yet.

Assessing enterprise value, I tend to net cash versus debt in the "insurance and other segment," but then also net out the company's equity and debt investments against its insurance liabilities. Not everyone does this, but to me, this produces what I think is an actual excess cash and investments number.

I also leave out the cash or debt from the railroads, utilities, and energy segments, as those are to a high degree recurring-revenue businesses that employ lots of debt in constructing their hard assets. Some may consider this cheating, as those segments have $68.4 billion in debt and just $3.8 billion in cash. However, I think Berkshire will be able to perpetually refinance those debts. After all, there is likely a reason that the company separates this category of debt from the "insurance and other" segment.

I also don't factor in other current assets like accounts receivable and current liabilities like accounts payable, as these aren't typically included in calculations of enterprise value.

Anyhow, returning to the "insurance and other" operating business balance sheet, these were Berkshire's cash and debt-like assets and liabilities at quarter-end:

Thus, Berkshire's "net cash and investments," or the above assets minus liabilities, were about $181.4 billion at quarter's end. Given its current market capitalization of about $517 billion, that means Berkshire's adjusted enterprise value is around $336 billion. If one were to count the roughly $65 billion in net energy/utility/railroad debt, the enterprise value would be around $400 billion.

Just as it's a tad difficult to tease out Berkshire's assets and liabilities, it's also a bit tricky to calculate Berkshire's earnings power. That's because thanks to a relatively new accounting rule, Berkshire has to report the fluctuations in its unrealized stock gains as part of its net income. Since the market can fluctuate wildly from quarter to quarter -- as has been demonstrated again this year -- so can Berkshire's earnings. That's why it's probably good to use Berkshire's operating earnings rather than net income, and assign a lower PE multiple to it to account for taxes.

Last year, Berkshire had roughly $29 billion in operating earnings. Of course, the stock has lagged this year because many of Berkshire's in-house businesses are economically sensitive, especially those in the industrial and manufacturing segments, and investors expect this recession to be difficult.

So far, that's proving to be the case. In fact, Berkshire took a $9.8 billion non-cash impairment charge on its Precision Castparts aircraft parts business, meaning that management concluded the COVID-19 pandemic has permanently impaired the value of that 2015 acquisition.

However, the earnings decline wasn't catastrophic by any means. Adjusted for these non-cash impairment charges, Berkshire's operating earnings declined just 10.2% in the second quarter, and just 2.3% for the first half of the year.

While Berkshire's businesses have no doubt been hurt by the pandemic, large "toll road" businesses like Berkshire Hathaway Energy's utilities have been enough to stabilize it against the declines in its manufacturing and industrial operations. Once again, Berkshire's large insurance business recorded an underwriting profit.

Even if Berkshire just earns $25 billion in operating earnings this year, which would be down 14% -- and worse than the first half -- Berkshire still looks to only be trading at an enterprise-value-to-operating-earnings ratio of 13.4, or a ratio of 16 if one conservatively factors in its railroad/utility/energy debt.

That's already cheap, but Berkshire stock is even cheaper when you consider two things: First, its earnings are likely near a recession-cycle bottom, so the "normal" operating earnings it will produce in years to come are likely much higher -- probably closer to $30 billion, once the pandemic is behind us. Second, many of Berkshire's top equity holdings, especially Apple (AAPL -1.96%), have appreciated significantly since the end of Q2. In fact, Apple alone is up 24% since July 1, which increased Berkshire's value by some $22 billion all by itself. Other major holdings are up as well, albeit not by as much.

When you consider the higher value of the stock portfolio today and the expectation of a more normalized earnings situation a year from now, the up-to-date enterprise value-to-operating earnings ratio actually is closer to 10, or about 12.5 times earnings after taxes.

I don't know about you, but to me, that sounds like a bargain valuation for a financially strong conglomerate run by a team of the best capital allocators of all time. No wonder Buffett stepped up share repurchases from just $1.6 billion in the first quarter to $5.1 billion in the second.

It's also why Berkshire remains one of my higher-conviction holdings today.