Please ensure Javascript is enabled for purposes of website accessibility
Log In Help Join The Motley Fool
Free Article Join Over 1 Million Premium Members And Get More In-Depth Stock Guidance and Research
By Will Healy – Aug 13, 2020 at 9:14AM

Is the warehouse club leader or regional underdog club a better investment?

At first glance, Costco (COST -4.26%) and BJ's Wholesale (BJ -2.52%) appear quite similar -- both are warehouse club operators that specialize in selling products in bulk. They also both opened their doors at approximately the same time. The first Costco opened in 1983 in Seattle, while BJ's started operations in New England in 1984.

However, since that time, Costco has placed itself on a much faster growth trajectory with 791 warehouses in 45 U.S. states and 11 foreign countries. In contrast, BJ's has expanded to 219 clubs, mostly on the east coast of the U.S.

Nonetheless, the coronavirus pandemic appears to have breathed new life into BJ's stock. Let's look at both consumer staples companies to learn more.

Without a doubt, Costco has made much more out of the last 35 years than BJ's. The industry leader boasts a market cap of over $150 billion, and its stock has traded since 1985. Debuting at a split-adjusted price of $1.67 per share, the stock has risen more than 200-fold over its history.

This stands in contrast to BJ's, which began its second stint as a public company in 2018. BJ's has risen over 140% from its $17 per share IPO price. However, those gains largely did not occur until March of this year as the market digested the implications of the COVID-19 pandemic. BJ's currently sports a market cap of less than $6 billion. 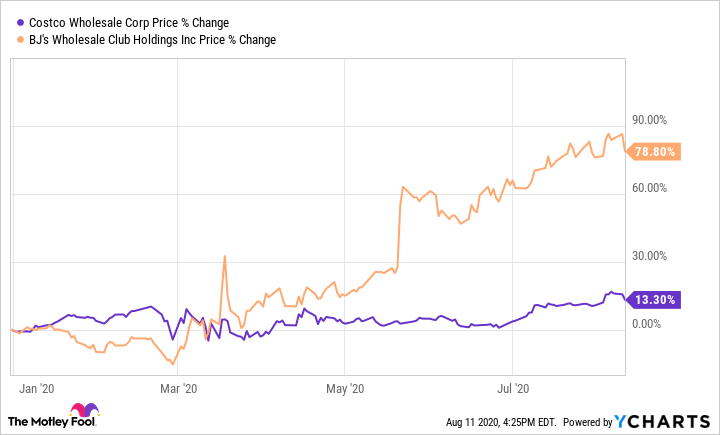 Both companies are set to release earnings in late August. Although Costco has shown promise in its monthly sales figures, only when both companies release quarterly results will the investing public fully grasp how COVID-19 has affected a full quarter of results for these retailers. However, both stocks have risen in recent months, and results for their fiscal quarters ended in May gave investors some indications of how the pandemic has affected each company.

Clearly, BJ's recently outperformed its larger rival in all of these metrics, and the company also sports a forward price-to-earnings valuation of 20.1, a significant discount to Costco's multiple of 36.1. However, Costco has a market cap more than 25 times larger than BJ's, and it generates over 10 times more revenue than its smaller rival. As a result, the market has rewarded Costco stock with a premium valuation, but BJ's smaller scale gives it the opportunity to produce rapid growth, which drives share price gains as we've seen in 2020 so far.

On BJ's first-quarter conference call, CFO Robert W. Eddy mentioned an opportunity to turn "one quarter's fantastic performance into many years of growth." This probably means a gradual infill of current markets and a gradual march westward.

With Costco already in 45 U.S. states, it will have a different focus. Since the company enjoys significant liquidity and a lighter debt load, it should have an easier time funding its expansion than BJ's. 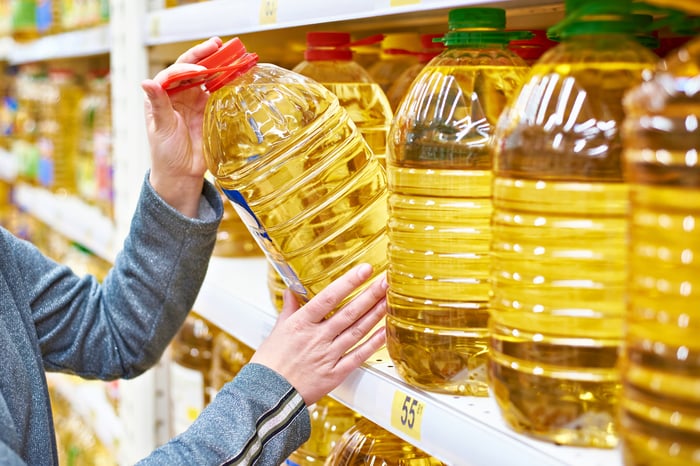 Although I expect Costco to continue prospering, I think BJ's stock is a better investment as of this writing. BJ's offers a much faster earnings growth rate at a much lower valuation. Also, given the histories of big names such as Costco and Walmart, investors tend to profit from regional retailers as they expand their geographic reach. BJ's may not open clubs in California anytime soon, but moves into Ohio and Michigan telegraph its goal to expand the company's footprint westward.

As store count and profits grow, so too should the price of BJ's stock.