Please ensure Javascript is enabled for purposes of website accessibility
Log In Help Join The Motley Fool
Free Article Join Over 1 Million Premium Members And Get More In-Depth Stock Guidance and Research
By Maurie Backman – Aug 13, 2020 at 10:47AM

The past week saw the lowest count of new jobless claims since the start of the pandemic, but the numbers remain high.

Read the news on unemployment, and you'll see some pretty sobering statistics. The jobless rate has been astronomically high since March, when COVID-19 made itself known as a widespread U.S. threat. But this week, some better news emerged on unemployment: Weekly jobless claims finally came in at under 1 million for the first time since March. Specifically, there were only 963,000 new unemployment claims for the week ended Aug. 8, which represents a decline of 228,000 from the week prior.

Clearly, this is encouraging at a time when the U.S. economy is stuck in a recession and many states are having a hard time containing the COVID-19 outbreak. But to be clear, 963,000 is a lot of new jobless claims to be filed in the course of a single week, and given that boosted unemployment benefits have run out, those recently out of work could be in for some tough times.

Unemployed workers are getting desperate

In March, lawmakers passed the CARES Act, and one of its most important provisions was a $600 federal weekly boost to unemployment benefits. That allowed many workers to replace their missing paychecks in full as they rode out the recession and waited to be called back to work or offered new jobs. 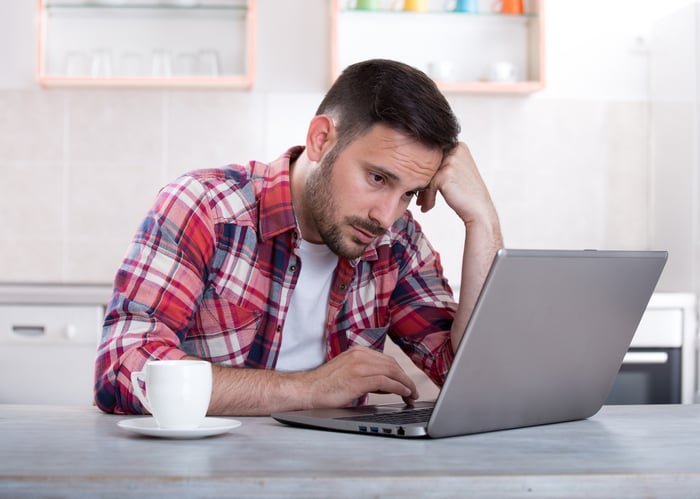 But the CARES Act only authorized that boost through July 31, and because of the weekly cycle under which states pay jobless benefits, it actually expired about a week prior in practice. Meanwhile, lawmakers have been unable to come to terms on a second COVID-19 relief package, and enhanced unemployment has thus far been a major sticking point. As such, many jobless workers have gone weeks without any extra money in their unemployment benefits, and those who recently filed claims may have to wait quite some time to see their benefits boosted.

Last weekend, President Trump signed an executive order calling for a $400 weekly boost to unemployment. But it's still unclear exactly how his plan will work and who will be eligible.

Initially, the president's order called for states to fund a quarter of that $400 boost, and many states don't have the funds to do so. Even if the federal government agrees to pick up the entire $400 tab, there's currently no system in place to get that extra money to the people who need it. Therefore, those new to unemployment (and those who have been collecting benefits for months) may still need to wait weeks or longer to see any additional money in their pockets.

There is a chance lawmakers will come to terms on a second relief package in the near term; there's certainly ample pressure to do so. Right now, Republicans are calling for a $200 weekly boost to unemployment through September, after which benefits would replace 70% of jobless workers' former earnings. Democrats are holding firm on that $600 figure, and neither side seems to want to budge. As such, while it's a good thing to see a decline in weekly jobless claims, ultimately it's still a very bad time to be unemployed.