Based on current levels, Apple's weighting in the Dow will drop from No. 1 to No. 17.

Apple (AAPL 0.79%) announced a 4-for-1 stock split when it reported fiscal third-quarter results last month, the first such corporate action since the last split (7-for-1) occurred back in June 2014. While stock splits are generally meaningless in terms of fundamentals due to the way that math works, the move will actually have a significant impact on the Dow Jones Industrial Average (^DJI 0.02%). 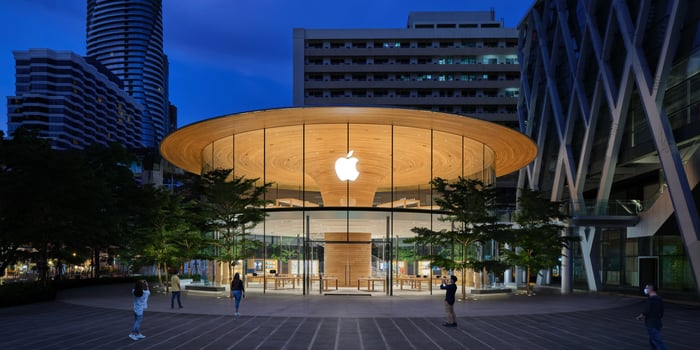 For starters, you have to recall that the Dow is unique among all major benchmarks: The index is price-weighted instead of market-cap-weighted. Individual stock prices are fairly arbitrary, especially relative to a company's overall valuation, again thanks to math. The S&P 500 and Nasdaq Composite are both market-cap-weighted, so companies with larger market caps have a greater influence over the index's daily fluctuations.

Japan's Nikkei 225 is another example of a price-weighted index. Incidentally, there was a decade where it was called the Nikkei Dow Jones Stock Average.

Trading around $460 per share ahead of the split that will become effective at the end of the month, Apple is the most expensive Dow component in terms of sheer share price, with health insurer UnitedHealth Group taking the No. 2 spot at around $320. Apple's share price will get divided by 4, putting it around $115 based on current levels, moving its price-weighted ranking down to No. 17 out of the 30 blue chip stocks, behind insurance company Travelers at approximately $119 but ahead of fitness giant Nike at roughly $106.

In terms of total weighting, Apple represents around 11% of the overall index. The Mac maker joined the Dow in March 2015, replacing telecommunications conglomerate AT&T. The stock is up over 250% since that time. 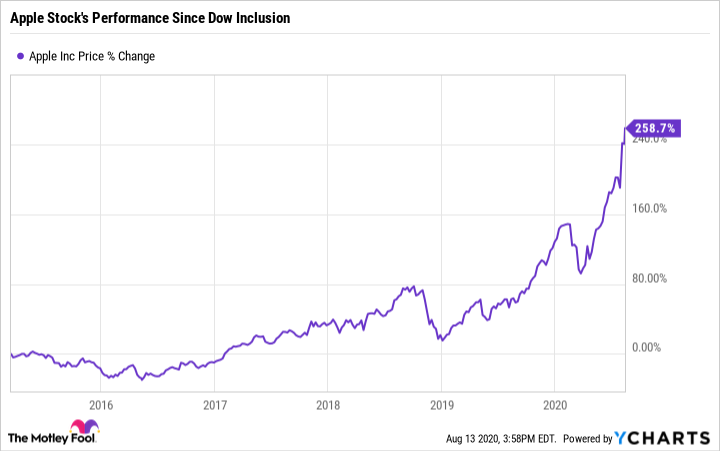 Index funds will need to sell some stock

It's worth noting that there will practical consequences to the reweighting. The Dow is one of the most widely followed major benchmarks for the U.S. stock market, which means there are countless index funds, including mutual funds and ETFs, that simply buy whatever stocks are in the underlying index. That type of passive management helps keep expenses and fees down because it doesn't cost a lot of money to sit around and wait for index constituent changes, which don't occur particularly often.

Once Apple's weight in the Dow is dramatically reduced, those index funds will have to rebalance their portfolios accordingly, which could create some selling pressure. However, retail investors love stock splits for superficial reasons like perceived affordability, which could theoretically broaden the investor base. The market's enthusiasm for stock splits is well-documented and could offset any selling activity from index funds.

At the end of the day, the Dow's price-weighted methodology is still a bit of an anachronism. The index arguably attracts disproportionate attention from investors, which is underscored by the fact that its moves are about to change significantly due to an arbitrary event like a stock split.