This fight is going to be epic.

Epic Games, maker of both Fortnite and the most popular game engine in the industry, was ready for this.

The company knew exactly what it was doing when it activated a direct payment system last week, sidestepping platform operators Apple (AAPL 0.66%) and Alphabet (GOOG -0.73%) (GOOGL -0.68%) subsidiary Google. What happened next was entirely predictable: The wildly popular battle royale game was booted off both the iOS App Store and Android's Google Play.

Within hours, Epic filed a lawsuit, released a video parody of Apple's iconic 1984 commercial, and launched a #FreeFortnite campaign on social media.

The backdrop of all of this is a massive congressional antitrust investigation into potentially anticompetitive practices at major tech giants. The CEOs of Apple, Google, Facebook, and Amazon testified virtually in front of Congress just a couple weeks ago. The scrutiny of Apple is very specifically about its App Store and the 15% to 30% commission it extracts from sales that it facilitates, which many developers large and small have argued is excessive.

Epic's timing here is utterly brilliant, as this dust-up perfectly encapsulates all of the criticisms about trillion-dollar tech companies wielding too much market power. Apple and Google have had these types of skirmishes with developers before, but Epic may prove to be a formidable foe due to the sheer popularity of Fortnite, which has hundreds of millions of registered players playing billions of hours per month across platforms. 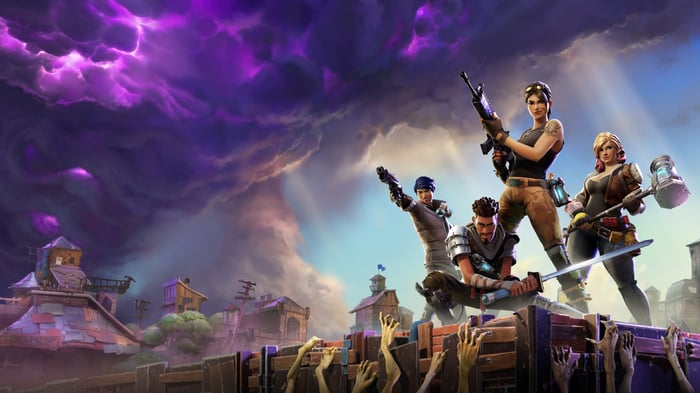 Additionally, by inciting Apple and Google to kick Fortnite out, Epic looks like the victim here. The narrative of tech behemoths blocking one of the most popular video games on the planet amid a global pandemic when people are desperate for home entertainment isn't going to look good.

"Apple is bigger, more powerful, more entrenched, and more pernicious than the monopolists of yesteryear," Epic wrote in its lawsuit. "At a market cap of nearly $2 trillion, Apple's size and reach far exceeds that of any technology monopolist in history."

It's worth noting some key differences in iOS and Android. Apple maintains strict control over iOS and the average consumer can only download or purchase content via the App Store. Android is a little more open and apps can be sideloaded or manually downloaded onto devices, bypassing Google Play. Epic used to leverage this circuitous route for Android but earlier this year finally begrudgingly released Fortnite directly on Google Play, arguing that Google had used various underhanded tricks that "puts software downloadable outside of Google Play at a disadvantage."

The video game industry is incredibly competitive, especially on mobile platforms. It's not an exaggeration to say that the 30% fees can make or break smaller studios, which Epic CEO Tim Sweeney has noted.

This is a critical consideration in these 30% store fees. They come off the top, before funding any developer costs. As a result, Apple and Google make more profit from most developers' games than the developers themselves. That is terribly unfair and exploitative. https://t.co/SSCTS4Iq2n

Epic has been trying to shake up game distribution in recent years, launching the Epic Games Store in 2018 to sell PC games, an area currently dominated by Valve's Steam. The Epic Games Store undercuts other platforms by charging a cut of just 12%.

Last summer, a group of developers sued Apple, alleging that the App Store is an illegal monopoly since it is the only way to distribute content on iOS devices. Those plaintiffs pointed specifically to Epic's disruptive move: "That a newcomer like Epic can run a store profitably with a 12% fee demonstrates how supra-competitive Apple's 30% developer fee truly is."

In theory, if the market for mobile content distribution were more open and competitive, platform operators would try to reduce fees over time as part of that competition, attracting more developers and potentially leading to lower prices for consumers.

"Fixed costs of developing and supporting the platform become negligible at a large scale," Sweeney told British outlet MCV shortly after launching the Epic Games Store. "In our analysis, stores charging 30 per cent are marking up their costs by 300 to 400 per cent."