Please ensure Javascript is enabled for purposes of website accessibility
Log In Help Join The Motley Fool
Free Article Join Over 1 Million Premium Members And Get More In-Depth Stock Guidance and Research
By Jim Halley - Aug 15, 2020 at 6:11AM

While the potential rewards in the pharmaceutical industry are high, so too is the rate of failure for companies trying to develop new drugs and therapies. But using artificial intelligence systems in the process can help improve those odds, and pharmaceutical companies are catching on. A Business Insider report in July said that as many as 214 companies focused on drug discovery are now deploying AI, up from 89 six years ago.

By using predictive algorithms that allow computers to learn from performing repetitive tasks, AI systems can trim the time it takes to develop new drugs. In biologics, they can help predict how complex large molecules will behave, cutting down on the need for testing.

At large pharmaceutical companies, where research may be spread out across large teams and thousands of scientists, AI systems can improve collaboration by helping collate data in ways that make it more usable and accessible. 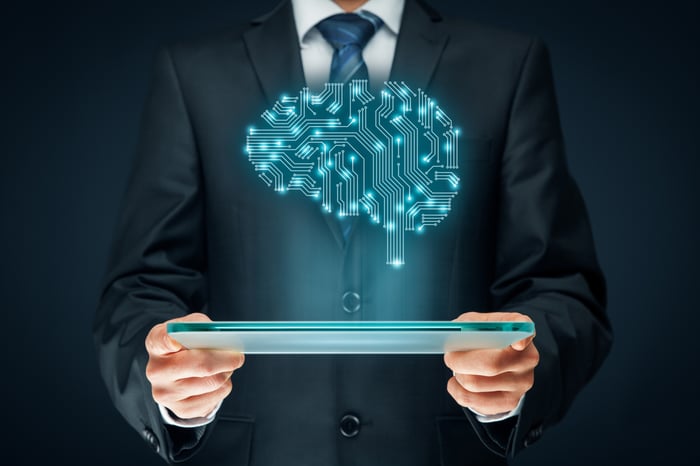 Here are four companies that have jumped into that strategy headfirst. It's hard to put a solid monetary value on artificial intelligence systems as an asset -- drug companies obviously can't list them as producing specific portions of their revenue streams. However, those that are pursuing AI in earnest are thinking long-term about cutting costs and becoming more productive, and that's definitely a good thing.

AstraZeneca uses AI to get a handle on genomics, costs

AstraZeneca (AZN 3.08%) is looking to analyze 2 million genome sequences over the course of the next six years to help it locate the parts of genes that cause diseases, and to identify which parts are more likely to respond to treatment. This, the company says, will help it find new drug targets. To do that, it plans on using artificial intelligence.

Another big way AstraZeneca is using AI is to design better clinical studies, finding the correct patients to include in trials by combing through electronic health records and by analyzing data from successful trials to build the best control groups. Within those trials, AstraZeneca is using AI to analyze data from wearable devices to more quickly gauge the effectiveness of treatments.

The company is one of the leaders in the industry in terms of using AI. It has multiple ongoing collaborations, including one with Microsoft (MSFT 1.70%), regarding AI and machine learning. AstraZeneca even has a vice president of data science, AI, and research and development.

The focus on AI certainly isn't hurting the company. AstraZeneca's shares are up nearly 30% over the past year and its new medicines are already paying off, accounting for half of the company's revenue through the first two quarters of 2020.

GlaxoSmithKline is serious about AI

GlaxoSmithKline (GSK 0.84%) has been quite open about its desire to boost its AI use. Three years ago, it entered into a $43 million agreement with Scottish AI company Exscientia, and in December, it told the U.K. newspaper The Guardian that it plans to add 80 AI specialists by the end of this year.

Late last month, the company entered into another AI agreement, this time with InveniAI of Guilford, Conn. When announcing that deal, Michael Keane, GlaxoSmithKline's consumer healthcare director for research and evaluation, said artificial intelligence has already has had a big impact:

"The data that we accumulate is large, broad, and complex. AI has helped us look at tasks that are datacentric across technology road-mapping, search and evaluation, and identifying and understanding new science. AI and ML [machine learning] have helped create efficiencies that shave four to five years off the innovation cycle, as well as eliminate human biases in identifying innovation."

That impact may not be showing up yet in the company's share price, which is only up 6% in the past year. However, in its second-quarter 2020 report, GlaxoSmithKline pointed out that it has identified 30 therapeutic targets from its collaboration with 23andMe by using artificial intelligence and machine learning.

Lilly brings AI to bear in the fight against COVID-19

Eli Lilly (LLY 2.63%) gave a great real-world example of how its AI efforts are paying off when it worked with BenevolentAI to crunch data from its clinical trials to determine that its rheumatoid arthritis drug Olumiant (baricitinib) might be useful for COVID-19 patients because of its anti-inflammatory effects.

In June, the company began a phase 3 clinical trial with 400 hospitalized COVID-19 patients to see whether the Olumiant reduced their mortality rates and their need for artificial ventilation.

Lilly's revenues are up 6% for the first half of the year and its shares are up more than 38% over the past year, so it's definitely doing something right.

Novartis has big partners in AI

In October, Novartis (NVS 0.12%) signed a five-year agreement with Microsoft to bring its AI technology to the drug-development process. Then in December, it inked a multiyear deal through which Amazon Web Services will deploy AI and related technologies to improve its supply chain, manufacturing, and distribution.

It's a bit early to measure the impact of Novartis' recent AI partnerships on its business, but in its second-quarter presentation, it specifically mentions how analytical data has helped it in its compliance efforts.

For the year, Novartis' shares are down more than 14%; the company cited COVID-19 concerns when it announced last month that its second-quarter sales were down 4% year over year. If there was a silver lining, it was that core operating income grew 1% due to lower spending and improved gross margins -- areas where AI can make a quick impact.

Going with the right company

According to one report, the pharmaceutical industry's spending on AI in drug discovery is expected to grow from $465 million this year to $2 billion by 2026.

Among the four companies discussed above, AstraZeneca and Eli Lilly are showing the most evident successes from their AI strategies, though GlaxoSmithKline and Novartis are also seeing results. Of the group, I think GlaxoSmithKline has the most room to grow, but in the short run, AstraZeneca seems the best bet because its huge pipeline is starting to pay off.