Please ensure Javascript is enabled for purposes of website accessibility
Log In Help Join The Motley Fool
Free Article Join Over 1 Million Premium Members And Get More In-Depth Stock Guidance and Research
By Keith Speights – Aug 18, 2020 at 6:05AM

It's probably a question of when and not if.

That shares of Intuitive Surgical (ISRG 3.23%) plunged more than 40% back in March now seems like just a bad dream. The robotic surgical systems stock has been on a tear since then, soaring nearly 90%.

Intuitive Surgical's share price is now near its all-time high. Is this price getting too high for the company's liking? Here are three reasons why Inuitive just might be headed for a stock split in the not-too-distant future. 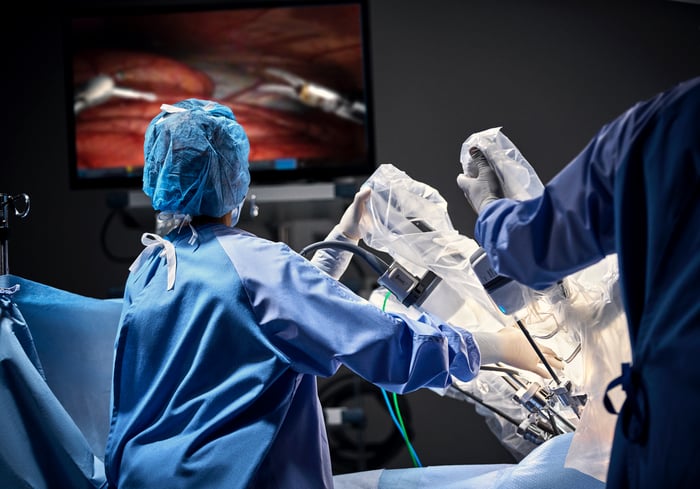 As of the market close on Monday, Intuitive Surgical's share price stood at a little over $693. That ranks the healthcare stock in the top 20 in terms of share price. Intuitive's share price comes in at No. 9 among stocks that trade on the Nasdaq stock exchange.

The main reason for any company to undertake a stock split is to make shares more affordable for investors to buy. With its share price approaching $700, Intuitive Surgical is currently too expensive for many investors to even buy one share.

Granted, several brokers now allow investors to buy fractional shares. However, not all of them do. With Intuitive's share price in the stratosphere compared to most stocks, it seems likely that the company's executives and board of directors have thought about splitting the stock.

2. A positive experience three years ago

Intuitive Surgical is no stranger to stock splits. The company did a 3-for-1 stock split in Oct. 2017. Intuitive's shares soared more than 50% in the 12 months following the split.

Some might point out that Intuitive's stock price was in the ballpark of $1,000 when the company announced in Aug. 2017 that it planned to split its stock. It's possible that the company might prefer to wait until the stock again gets close to that level before moving forward with another split. However, Intuitive Surgical shares would only have to rise as much as they have in the past three months to knock on the door of the $1,000 level.

There could also be some peer pressure at work. Apple (AAPL -1.26%) and Tesla (TSLA 1.72%) announced stock splits earlier this month. Although Tesla's share price is much higher than Intuitive's, Apple stock is trading well below the robotic surgical systems maker's shares.

Apple, in particular, received kudos from CNBC host Jim Cramer. He cheered the stock split, stating that "Apple cares about the little guy."

Tesla also was praised by Wall Street analysts, many of whom similarly viewed Tesla's move as making its stock more accessible to individual investors.

Keep in mind that a stock split does nothing to make a stock more valuable. While stock splits can pave the way for more individual investors to buy shares, the effect is much less significant than in the past due to the rise of fractional shares. If Intuitive Surgical does opt to split its stock, the move wouldn't by itself be a reason to buy.

However, there are plenty of other reasons to go for Intuitive Surgical. Aging demographic trends should drive higher demand for the types of procedures that are ideally suited for robotic surgery. Intuitive continues to expand the types of procedures that can be performed with robotic assistance through technological innovation. The company also has significant opportunities to expand internationally.

The bottom line is that whether Intuitive's shares trade at $700 or $70, the price is right for buying this long-term winner.