The retailers had great second quarters, but both expressed some caution about the rest of the year.

Home Depot blew away estimates, reporting a massive rise in comparable sales as consumers spent big on home improvement projects and big-ticket items. But management cautioned that the second half of the year is unlikely to be quite as rosy. Walmart also reported incredible results, but the company disclosed that sales trends have begun to normalize as stimulus spending has wound down. 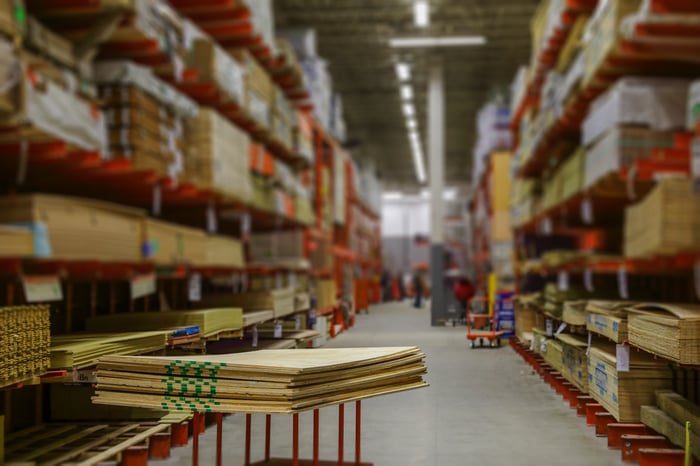 Home improvement retailer Home Depot reported an astonishing 23.4% rise in comparable sales for the second quarter. Total revenue was up the same percentage to $38.1 billion, beating the average analyst estimate by $3.4 billion. Earnings per share rose 26.8% to $4.02 despite additional investments in employee benefits, ahead of analyst expectations by $0.34.

Home Depot's digital sales doubled in the second quarter, and over 60% of those online orders were picked up at a store. Big-ticket items like appliances and patio furniture were big sellers.

Despite the blockbuster earnings report, shares of Home Depot were down around 1.3% Tuesday morning. Management said during the earnings call that the trends in the second quarter shouldn't be extrapolated for the rest of the year, although the first two weeks of the third quarter have been strong.

Home Depot has benefited from a perfect storm of people spending more time at home, unprecedented economic stimulus, and consumer spending shifting away from restaurants and travel during the pandemic. Some of these tailwinds may persist for a while since the pandemic is far from over in the United States. But lower stimulus spending coupled with a potentially long recession will be working against those trends.

While Home Depot stock slumped following the earnings report, shares of the home improvement giant are still up around 30% since the start of the year.

Like Home Depot, Walmart reported incredible second-quarter numbers on Tuesday morning. U.S. comparable sales jumped 9.7%, driven by a 27% surge in the average ticket and a 97% jump in e-commerce sales. The number of transactions dropped by 14% -- shoppers are visiting the stores less often, but they're buying more stuff when they do.

Total revenue of $137.7 billion was up 5.6% year over year and about $3.9 billion higher than the average analyst estimate. Adjusted earnings per share came in at $1.56, up from $1.27 in the prior-year period and $0.31 higher than analysts were expecting.

Also like Home Depot, Walmart stock was down following its earnings report. The stock shed about 1.2% Tuesday morning.

Walmart benefited from economic stimulus, seeing strong demand for home goods, sporting goods, landscaping products, and electronics during the second quarter. But the company said during the earnings call that sales began to normalize as the stimulus spending tapered off. For July, comparable sales were up a less impressive 4%. The federal supplemental unemployment benefit, which gave those claiming unemployment an extra $600 a week, expired at the end of July.

Walmart will do fine in a recession and absent the kind of stimulus that boosted sales in the past few months, but investors shouldn't expect blockbuster growth going forward. Shares of Walmart are still up about 12% year to date following the post-earnings slump.