Please ensure Javascript is enabled for purposes of website accessibility
Log In Help Join The Motley Fool
Free Article Join Over 1 Million Premium Members And Get More In-Depth Stock Guidance and Research
By John Rosevear - Aug 18, 2020 at 9:39AM

Canoo is the latest EV startup to join the SPAC party.

Electric-vehicle start-up Canoo Holdings is going public: The company said on Tuesday that it will merge with a publicly traded special-purpose acquisition company (SPAC) in a deal similar to the one that took electric-semi start-up Nikola (NKLA 0.46%) public in June.

The combined company will be called Canoo, Inc., once the merger with SPAC Hennessy Capital Acquisition IV (HCAC.U) closes in the fourth quarter of 2020. The post-merger company will trade on the Nasdaq exchange under the ticker symbol "CNOO," the companies said in a statement.

The deal, which values Canoo at $2.4 billion, will raise about $600 million in cash. 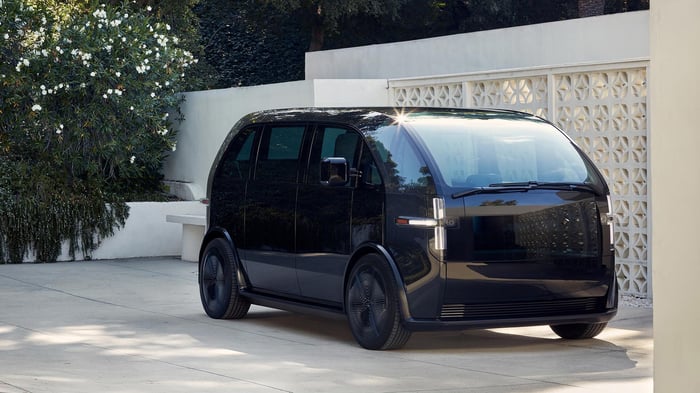 Canoo aims to have its first vehicle, an urban people-mover, in production in 2022. Image source: Canoo Holdings.

Canoo aims to simplify and lower the cost of electric vehicles. The company, which counts Korean auto giant Hyundai (HYMTF -0.06%) among its partners, will base its vehicles on a so-called "skateboard," a flat platform that incorporates batteries, motors, and suspension. The company will offer its vehicles to individual and commercial customers via a subscription model that includes maintenance and recharging.

Canoo's skateboard can be paired with a wide variety of vehicle structures (called "top hats" in the industry lingo) to create shuttle buses, urban delivery vans, and other kinds of vehicles. Production of its first model, the Canoo minivan, is expected to begin in 2022. Canoo plans to add a small commercial delivery van in 2023 and a sports sedan in 2025. All will be tailored for urban markets.

"Unlike any other EV company, Canoo has created a go-to-market strategy that captures both B2C and B2B demand with the same skateboard architecture and technology that has already been validated by key partnerships such as with Hyundai," said Hennessy Capital CEO Daniel Hennessy. "We are thrilled to partner with Canoo on their mission to reinvent urban mobility."