EV automaker Tesla (TSLA -3.83%) has been one of the better U.S. companies at navigating its relationship with China and Chinese authorities. After all, Tesla recently received preferential interest rates from China's state-owned banks in order to build its Shanghai assembly factory, and Tesla minority investor Tencent (TCEHY -1.25%) recently promoted the Tesla brand within its hit mobile game, Peacekeeper Elite.

However, things aren't totally copacetic between China and Tesla at the moment. Recently, China moved to lower the price of cars that qualify for its EV subsidies, to a price point lower than the standard Model 3. In response, Tesla might have to lower its prices in China by about 7.3%.

Not only that, but Tesla has recently run into a problem with Pinduoduo (PDD -1.54%), a discount e-commerce site which has caught on in China over the past few years. Recently, Pinduoduo offered to subsidize five random Tesla purchases for customers if 10,000 people signed up for a promotion in July.

But Tesla refused to deliver the cars to the winners of the sweepstakes-like offer, even though the car maker would have received full price for the cars. Here's why. 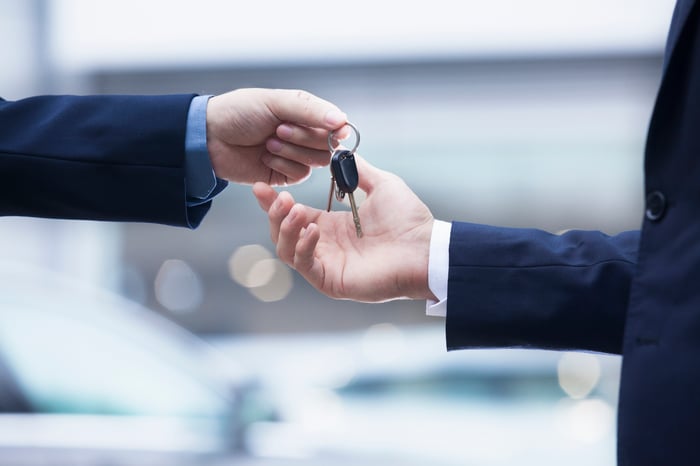 Tesla's method of selling is unique in the car industry. Part of the company's model and brand promise is that it controls every part of the process, from vertically integrating its own proprietary chips and batteries to selling directly to its customers, bypassing traditional dealerships.

Pinduoduo's contest, well-intentioned as it might have been, inserted a third party between Tesla and its customer -- or so Tesla alleges. Pinduoduo, along with its partner in the offer, Chinese car dealer Yiauto, never actually took possession of the Model 3 vehicles, according to the South China Morning Post. Instead, Pinduoduo arranged for the sales directly between Tesla and the buyers, then subsidized the purchase to the buyer in a separate transaction.

At first, investors may be thinking, "why would Tesla do this?" After all, the electric-vehicle maker was receiving full price for the vehicle, not the subsidized price offered on Pinduoduo. Moreover, the company risked negative press in China for disappointing customers, as a screenshot of Tesla's refusal was circulated on social media within the country. In a statement, Pinduoduo said:

We are disappointed that Tesla has made it difficult for some of their fans to get their dream car. We appreciate the trust that our users put in our platform and will do everything we can do protect their rights. We put our consumers' interests first and stand by them.

Pinduoduo then took to social media microblogging site Weibo, stating, "Tesla rejected the order from the customer who had no intention to resell the vehicle, and had meant it for personal use... it was Tesla that refused to deliver on an order contract with a consumer."

One of the buyers is also considering filing a lawsuit against Tesla, according to Chinese news agencies.

Controlling the brand is the name of the game

The reason Tesla was so stern regarding the Pinduoduo promotion is not so much about the particular transactions, but rather Tesla trying to clarify the rules of the road early on in its journey in China. Tesla's business model involves, by and large, a luxury-priced product. Even the Model 3, while costing less than other Teslas or luxury cars, is usually priced higher than traditional gas-powered mid- and lower-level sedans.

So, on price as well as on the customer transaction experience, Tesla's brand promise is that it controls every step of the journey. While the Pinduoduo offer in and of itself may not seem to be that big of an infraction, Tesla is likely looking to lay the ground rules early in China, where purchasing goods through third-party websites is common, as is piracy and other problems for big brands.

Given Chinese habits, this may not be the last time Tesla rankles Chinese consumers going forward.

Yet no matter the end result of this small tiff, investors should be prepared for Tesla's Chinese journey to run into more bumps in the road, so to speak, as the big American brand clashes with China's culture.

China was actually the only growth market for Tesla last quarter, and is critically important for the automaker going forward. Given that the large Chinese market is so important for Tesla, and likely a significant factor behind the stock's massive rally this year, Tesla's dealings with China's government and leading Chinese companies are worth keeping an eye on.