Are sailings today or deposits for voyages in 2021 the answer to the industry's woes?

Shares of cruise line stocks had another strong start to the day Wednesday after one cruise line returned to open water and another found ways to sell high-value cruise tickets. 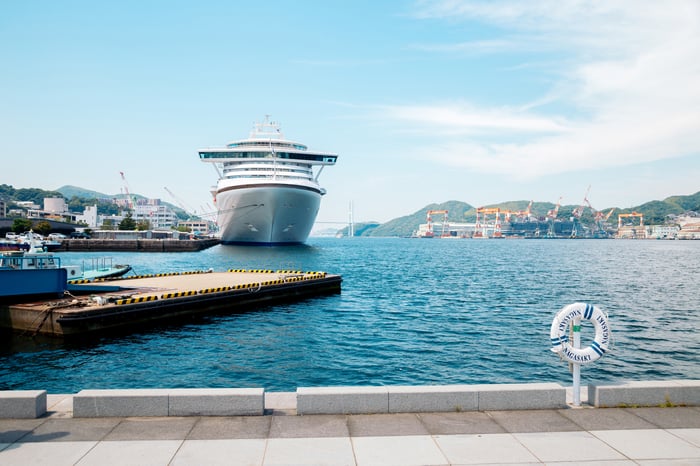 MSC Cruises is the company that set sail again, beginning a Mediterranean trip earlier this week with strict COVID-19 precautions. It's potentially a positive sign for the industry, but multiple passengers tested positive for the virus and needed further screening or were denied entry. It's still unknown if the cruise will keep passengers safe, but the industry and investors are watching.

The other big news was Carnival's Holland America Line opening bookings for the 2021 Grand Africa Voyage and 2022 Grand World Voyage. On the Africa voyage, discounts of $3,970 are being offered, but tickets start at $11,799. For the World voyage, tickets start at $22,899 per person.

If Carnival can get people to sign up for these long voyages, it could be a way to generate cash while ships are still out of operation. Cruise lines raised billions of dollars earlier this year to stay afloat, but aren't equipped to survive for a year without passengers. If some customers will sign up for these long voyages, it'll be a small but important sign that demand will return and generate needed cash for Carnival.

Cruise stocks have been extremely volatile this year, so it's not surprising that even small news items can send shares higher or lower. But the long-term fate of these investments could come down to discretionary consumer behavior, which will determine how quickly revenue will begin flowing again.

What I would watch closely is how many passengers or crew members contract COVID-19 from voyages already underway. There are still reports of crew members getting sick in Europe, and passengers were flagged on the MSC cruise before getting on board. If the virus can't be controlled, the industry may be shut down, even in Europe, and that's worrisome now that cruise lines are hitting the water again.