Trulieve Cannabis (OTC:TCNNF) is unlike many of the big pot stocks out there. The company is profitable and it continues to generate sales growth. And yet, much of its success has been limited to one key market: Florida. The other obvious oddity is that the stock's up 85% year-to-date -- it's outperforming not only the Horizons Marijuana Life Sciences ETF (OTC:HMLSF) and its abysmal 24% decline, but also the S&P 500, which is up over 4% this year.

Trulieve has achieved a lot in 2020 and its stock is coming off all-time highs, but there's still room for it to climb, suggested by the company's recently increased guidance. It may not be too late for new investors to jump onboard -- the company is gearing up for big sales growth once it turns its focus outside Florida and looks to acquire budding cannabis-related businesses. Let's dig into Trulieve's expansion plan, and see whether it reassures investors that they can buy this stock high and expect to sell it even higher.

The company dropped a big hint in its earnings release

Trulieve's second-quarter results for the period ending June 30 earned plenty of excitement when they were released on Aug. 12. Sales of $120.8 million were up 109% from the year-prior, and the company's adjusted earnings before interest, taxes, depreciation, and amortization (EBITDA) also grew by 92% to $60.5 million. It was the 10th straight quarter that its adjusted EBITDA was in the black. Trulieve's cash and cash equivalents also grew from $100 million in the first quarter to $150 million. 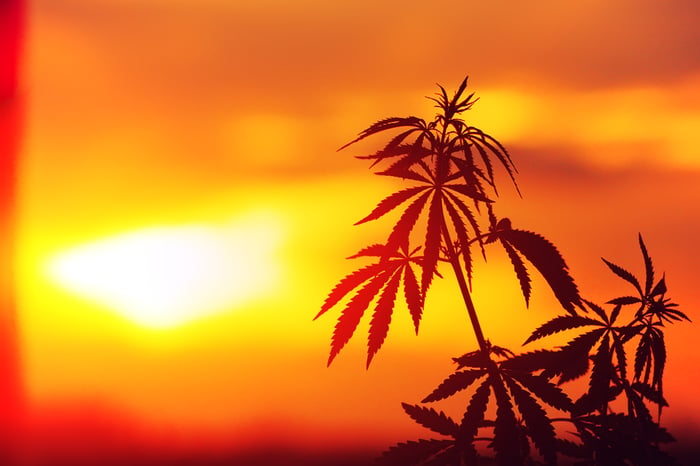 And while that's all great news, the real reason for investors to get excited about the stock is its plans for the future. Trulieve recently announced the opening of its 58th dispensary, located in Longwood, Florida. It's the 56th dispensary that Trulieve will open in its home state. But the company intends to establish footholds beyond Florida. Trulieve already operates one dispensary in Connecticut and another in California, and received a provisional adult-use cannabis license in June from the Cannabis Control Commission in Massachusetts. The license will allow Trulieve to cultivate, manufacture, and sell in the state when it's ready.

CEO Kim Rivers indicated in the company's earnings release that Trulieve's Massachusetts operations could be up and running sometime next year. But that's just one piece of the growth strategy for Trulieve. Rivers also said that there could be "new opportunities for expansion" through mergers and acquisitions. Given the significant drop in valuation that many pot stocks have suffered in the past year, now could be a prime time for Trulieve to snatch up new assets at significant discounts. Whether it's to expand its position in current markets or enter new ones, there are plenty of opportunities for Trulieve to choose from. On whatever path it decides to take, the company can take advantage of its higher share price to make deals that won't cripple its stock.

Expansion is more than a good idea, it's a necessity

Trulieve is doing well in its home state, but now may be a good time to leave a footprint on other markets. With only two dispensaries outside of Florida, the company is technically a multi-state operator, but almost all of its eggs are in the sunshine state's basket. A move beyond its borders would enable Trulieve to generate even more sales growth while reaching more customers across the country. Another reason it should look to other markets: The competition is flocking to Florida.

On Aug. 6, Curaleaf Holdings (OTC:CURLF) announced that it would be expanding its Select brand into Florida. The company has been working on expanding Select and turning it into a national brand after officially acquiring its parent company, Cura Partners, in February. Curaleaf is an industry heavyweight, recording $117.5 million in revenue in its second-quarter results for the period ending June 30 -- almost on par with Trulieve's recent tally. That number grows to $165.4 million on a pro forma basis if you include Curaleaf's pending acquisitions.

Trulieve could be in for a fight in Florida, where it holds a slim 51% majority of market share. Although Curaleaf already operates dispensaries in the state, the expansion of Select is likely to intensify competition between the two companies.

Despite the surge in price this year, Trulieve's stock is still trading at some decent revenue multiples compared to other pot stocks: 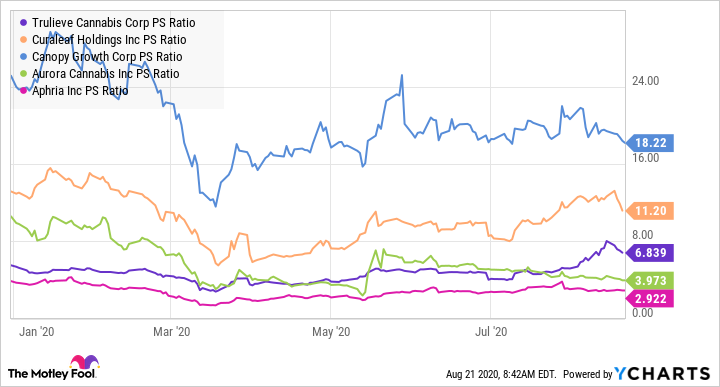 It's not the cheapest pot stock out there, but it's also nowhere near the most expensive. If you expect more revenue growth in its future, Trulieve's price-to-sales multiple, which reflects the company's market capitalization in relation to its total revenue over the past four quarters, could come down. As the company makes a name for itself across the country, investors may be willing to pay a higher premium for its diversified operations.

Although investors may be disappointed to have missed out on Trulieve's incredible rally this year, there's still growing room in the marijuana industry. Pot stock pickers should carefully watch how Trulieve takes advantage of its positive financial position and acts on increased guidance from management. If Trulieve can capitalize on new markets, Foolish investors who buy Trulieve high today could sell the stock for a higher price down the road.