Please ensure Javascript is enabled for purposes of website accessibility
Log In Help Join The Motley Fool
Free Article Join Over 1 Million Premium Members And Get More In-Depth Stock Guidance and Research
By Keith Speights - Aug 23, 2020 at 6:12AM

Here's exactly how they could realistically pull it off.

Quite a few stocks of companies developing COVID-19 therapies and vaccines have soared this year. Some have delivered downright astronomical gains.

Don't think for a second that the prospects for bigger returns in the future have diminished. Actually, it seems likely that clinical progress over the coming months could drive some stocks much higher. Here are three coronavirus stocks that arguably could even double by the end of 2020. 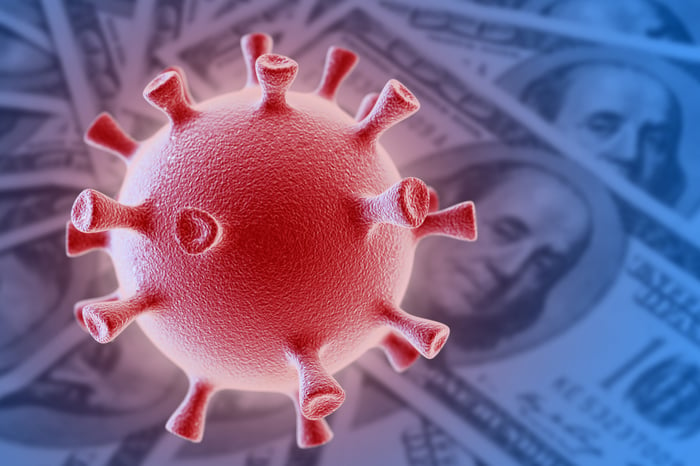 So far this year, Novavax (NVAX -31.68%) shares are up by nearly 3,400%. Is it really conceivable that the biotech stock could double over the next four months after that staggering gain? Absolutely.

Novavax's impressive performance stemmed from two key developments. In March, the company reported very good results from a late-stage study of flu-vaccine candidate NanoFlu, which set the stage for filing for approval by the Food and Drug Administration. Novavax also announced positive results in early August from a phase 1 study of its novel-coronavirus vaccine candidate NVX-CoV2373.

Despite its huge year-to-date gain, Novavax's market cap stands below $9 billion. That's only around one-third the market cap of Moderna (MRNA -5.77%), a biotech that's ahead of Novavax with a COVID-19 vaccine candidate already in phase 3 testing.

The trick for Novavax stock to double by year-end is for the company to wow with its phase 2 studies of NVX-CoV2373 and advance the experimental vaccine into late-stage trials. Novavax has already started a phase 2 study of the candidate in South Africa and plans to soon begin trials in U.S. and Australia. Moderna initiated a phase 3 study of its COVID-19 vaccine candidate roughly two months after starting its phase 2 study. If Novavax follows a similar timeline and NVX-CoV2373 delivers on its potential, it's quite possible that the biotech's shares could at least double by the end of 2020.

Inovio Pharmaceuticals (INO -9.11%) stock skyrocketed close to 850% year to date by late June. It's since given up some of those huge gains, but is still up almost 330% so far this year. All Inovio needs to do to double is to get back close to where it was just two months ago. That doesn't seem like too tall of an order.

The biotech reported positive interim results from a phase 1 study of COVID-19 vaccine candidate INO-4800 in late June. That's also when its stock began to slide. Coincidence? Nope. While Inovio announced that INO-4800 demonstrated overall immune responses and was well-tolerated, it didn't provide any details on the levels of neutralizing antibodies (which may protect against infection by the novel coronavirus).

But Inovio could remove doubts about the potential for INO-4800 if the experimental vaccine performs well in phase 2 testing. The company expects to start a phase 2/3 study of its COVID-19 vaccine candidate in September. It seems likely that Inovio would be able to announce interim results from the phase 2 portion of this study later this year, possibly giving its stock a big shot in the arm -- pun fully intended.

Inovio also has another potential catalyst on the way. The company anticipates the announcement of results from a pivotal phase 3 study evaluating VGX-3100 in treating cervical dysplasia associated with HPV (human papillomavirus) in the fourth quarter of this year.

Many small biotechs with preclinical coronavirus programs could see their shares double by the end of 2020, if those programs successfully advance to clinical testing. Vaxart (VXRT -0.58%) appears to be one of the most promising of these biotechs. Its stock has zoomed more than 2,200% higher year to date after rising more than 4,700% in July.

As is the case with Inovio, Vaxart simply needs to regain its relatively recent high mark to double by the end of this year. This might not be all that difficult to pull off.

Vaxart stock's pullback wasn't due to any concerns about its COVID-19 vaccine candidate. The company's move to raise cash by selling shares through its at-the-market facility was the primary culprit behind the stock's decline in July.

Now, though, Vaxart could be on its way to beginning a phase 1 study of the experimental vaccine after filing an Investigational New Drug (IND) application with the FDA earlier this month. The twist for Vaxart is that its vaccine is a tablet rather than an injection. Positive phase 1 results should light a fire beneath this already-hot biotech stock.

I have no qualms at all stating that Novavax, Inovio, and/or Vaxart could see their shares double or more by the end of this year. The paths for each biotech to achieve such remarkable gains seem clear-cut.

However, it's important for investors to understand that all three of these companies also face significant risks. There's no guarantee that their COVID-19 vaccine candidates will be successful in the next round of testing; the chances of failure are very real. I'm most optimistic about Novavax's odds based on its phase 1 results, but it could still stumble.

Risk-averse investors are probably better off staying away from all three of these clinical-stage biotech stocks. Aggressive investors could find any or all of them intriguing. Just keep in mind that the potential for a doubling in price is joined at the hip with the potential for trouble.