These seven metrics show why.

It's been a rocketship ride for shareholders as Shopify (SHOP -2.55%) stock has more than doubled since the beginning of the year, and orbited past 10-bagger status for those who have held for the last three years. 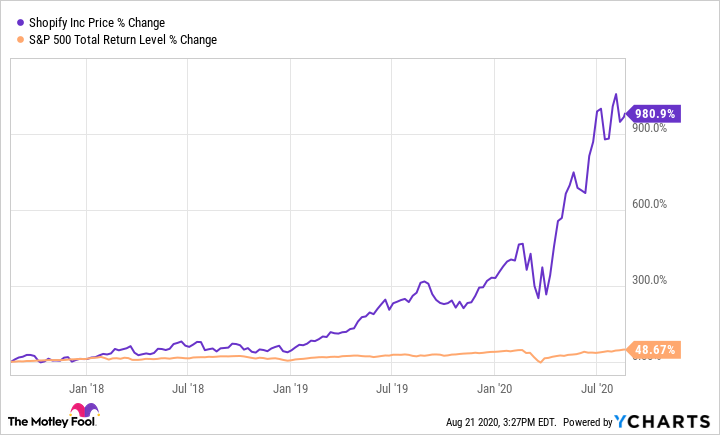 The company has built an incredible business with its e-commerce platform that helps small businesses to large enterprises start and run online stores, but the most recent quarterly results have put an exclamation point on its success.

Let's look at the seven reasons why this was its best quarter ever and what it means for investors.

Shopify has always had a merchant-centric focus to ensure its customers will be successful using its platform, and it's paid off. This quarter, merchants had their best-ever result, thriving in the wake of stay-at-home orders driving consumers to shop online. The value of goods sold on its platform (gross merchandise value or GMV) last quarter grew 119% year over year to reach its highest mark ever at $30 billion, a full 46% more than the previous record, set during the holiday-gift-giving fourth quarter of 2019.

But what's even more exciting is that its existing merchants benefited the most, with merchants of all sizes and geographies seeing increases in their average sales for the quarter.

2. The highest penetration of Shopify Payments

As merchants grow their businesses, the platform's extensive ecosystem of tools can help those businesses to scale. Shopify Payments is one of those extra services that merchants can use to make it easier to collect money for product sales, and the company takes a small cut from every transaction. This quarter marked the highest penetration rate of payments usage, coming in at 45%, representing a 132% gain in payments collected over the second quarter of 2019. This trend shows that merchants are becoming more deeply embedded in the ecosystem.

3. Shopify Plus welcomed the most new merchants

Shopify has a number of subscription services. They start at just $9 per month and range all the way to its enterprise service, Shopify Plus, which starts at $2,000 per month. More merchants than ever before signed up for this premium service in the quarter, which shows the incredible value its platform brings to customers of all sizes. This high-end subscription plan has grown to a substantial 24% of the total monthly recurring revenue. 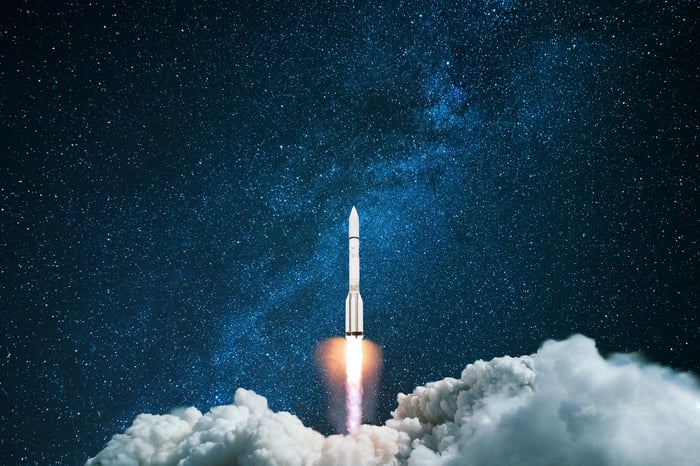 Not only did Shopify have a record number of merchants sign on to take advantage of the extended free trial, it also converted merchants to its paid service, racking up $57 million in monthly recurring revenues from subscription fees, another record for the platform. Investors love this consistent base of recurring revenues.

5. Most revenue in a quarter

Not surprisingly, all of these accomplishments add up to the company's highest revenue quarter by far. It achieved $714 million on its top line, a 97% gain year-over-year, and a 41% increase over its previous record of $505 million from Q4 2019.

As revenues and platform volumes hit new highs, the business scaled efficiently to its lowest-ever operating costs as a percentage of revenue. Its adjusted operating expenses (excluding stock-based compensation) decreased from 56% of revenue in Q2 2019 to just 37% this quarter. This blew by the previous record from Q4 2019 of 48%.

With its most recent share offering in May raising an additional $1.5 billion, its cash and marketable securities reached its highest mark ever. The company is sitting on a massive pile of $4 billion on its balance sheet and no debt. This will be used to continue its history of investing in innovation to make its platform even more valuable for its merchants.

There's no doubt that this growth company is on a roll, and the market recognizes it with a premium price-to-sales valuation of 57. After the tremendous run-up in the stock, shareholders may be thinking about taking profits, and those who don't own the stock may be scared off at its lofty valuation. But I would suggest those views are short-sighted. This quarter is a launchpad for this platform's continued growth, and I'll share a chart to demonstrate my point. 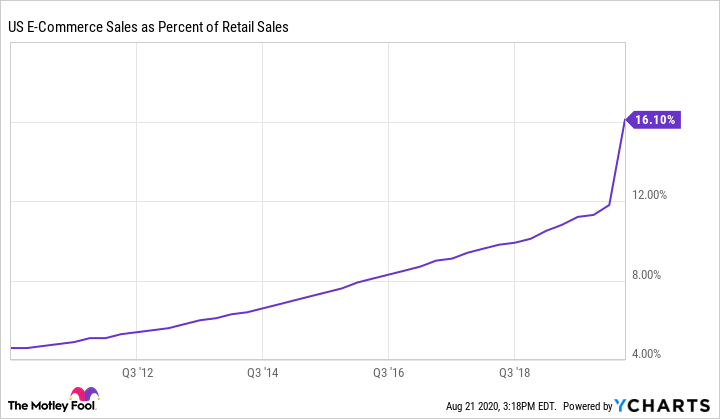 The above graphic is the U.S. e-commerce quarterly sales as a percent of total retail sales for the last 10 years. The trend has been a gradual rise until the pandemic drove a significant step-change in online activity, and this isn't just a passing fad. In the most recent earnings call, Chief Financial Officer Amy Shapero stated that "we believe the COVID pandemic has permanently accelerated the growth of online commerce, changing the retail landscape forever" (emphasis is mine).

With billions in cash as fuel to fund innovation and growth, this rocketship is just beginning its journey to the stars. You don't want to miss it.