Please ensure Javascript is enabled for purposes of website accessibility
Log In Help Join The Motley Fool
Free Article Join Over 1 Million Premium Members And Get More In-Depth Stock Guidance and Research
By Brian Withers – Jun 25, 2020 at 9:37AM

This e-commerce platform is aligned with the long-term success of its customers, and that's good for investors.

Shopify (SHOP -1.42%) has been an incredible investment for shareholders over almost any holding period since its May 2015 IPO. This platform for entrepreneurs to run online stores is riding the tailwinds of e-commerce, but that's only part of the reason for its success. The company's merchant-focused approach has helped its customers succeed, which in turn drives its revenue growth.

In May 2020, the company released a massive set of upgrades to its platform for merchants. Let's take a detailed look at these enhancements, why they matter, and how Shopify's history of innovation is a key to its success. 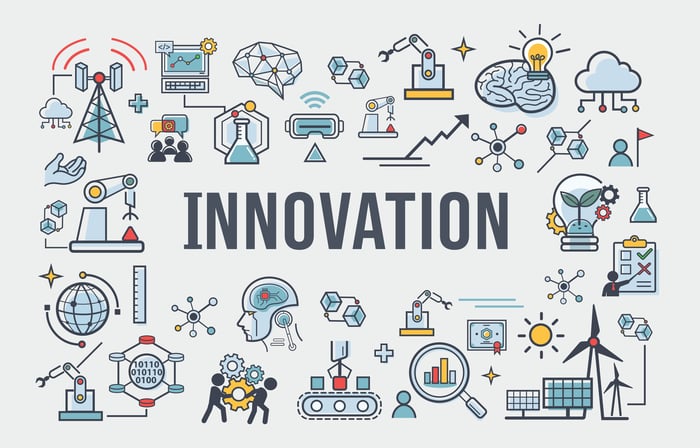 Enhancements with the merchant in mind

As an introduction to its enhancement announcement, CEO Tobias Lutke explained why these improvements were prioritized over others:

Right now, we're dedicating ourselves to helping as many small businesses as possible survive this [pandemic]. We've looked far and wide into our roadmaps for everything that might be helpful right now, and have tried to pull as many things forward as we could...

These improvements centered around cash management, payment options, and expanded delivery/fulfillment capabilities. The most substantial feature is called Balance, which enables merchants to manage their business expenses and cash flow in an account similar to a business bank account. It features an account that is completely integrated into Shopify's platform. This allows merchants a complete financial view of all cash flows, making it easier to make financial decisions. Best of all, there are no monthly fees or minimum balance requirements.

In new payment options, a buy-now-pay-later feature and an installments program were announced to provide ways for merchants to get paid upfront while their customers have the flexibility to spread out costs over time. Lastly, local delivery options for online stores have been added, and the Shopify Fulfillment Network has been opened up for all merchants as it moves off the beta phase.

These merchant-centric enhancements go a long way toward helping customers through these challenging economic times. But this isn't just a one-time handout; it's part of Shopify's long-term business strategy.

In the company's filing to go public document from 2015, Lutke included a letter that explained his perspective on Shopify's purpose:

We believe that by giving merchants an affordable, easy to use solution that helps them sell and run their business, Shopify will share in their success as they grow. ... Shopify has been about empowering merchants since it was founded, and we have always prioritized long-term value over short-term revenue opportunities. We don't see this changing.

This still remains true today. Entrepreneurs can get started on the platform for as little as $9 per month for the Shopify Lite plan that allows them to list products for sale online, create invoices, and collect credit card payments. In addition to subscription fees, it collects a small portion of each sale for payment processing, discounted shipping, or other transaction-based services that are needed to sell goods. These fees are part of the merchant solutions segment, which made up almost 60% of the top line revenue last year.

The alignment of a significant portion of its revenue with sales on the platform is a key way the company ensures its commitment to merchant success. But that's not all that is fueling the company's growth. Platform enhancements don't just have a short-term payoff; they help accelerate what Shopify calls its flywheel.

Management knows that simplifying and enhancing its platform for merchants enables them to be more productive and sell more as a result. These enhancements not only keep current customers on the platform, they attract new merchants too. 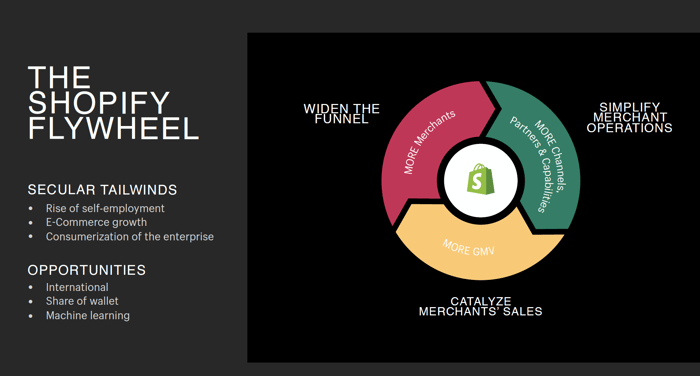 As new merchants start on the platform and become successful, it enables Shopify to invest in more enhancements, and the flywheel spins faster and fuels long-term growth.

Investors shouldn't take this alignment with its merchants' success for granted -- it's certainly not common. But then, this e-commerce operator is an uncommon company. Its merchant-focused approach has powered this growth company to astounding heights. Over the last four quarters, its million-plus merchants sold over $66 billion worth of goods, moving this platform into second place in market share of online sales in the U.S. behind Amazon.

But e-commerce is still in its infancy. Shopify's continued investments will help ensure that long-term shareholders benefit alongside the company and its merchants.