Please ensure Javascript is enabled for purposes of website accessibility
Log In Help Join The Motley Fool
Free Article Join Over 1 Million Premium Members And Get More In-Depth Stock Guidance and Research
By Adam Levy - Aug 25, 2020 at 10:00AM

The two retailers are already showing signs of slowing down.

Target (TGT 1.70%) and Walmart (WMT 1.85%) just reported blowout second-quarter results, a strong follow-up to their outperformance in Q1. The two retailers saw robust growth in their stores and even bigger growth for online sales, showing strength compared to Amazon (AMZN 2.07%). While the two big-box stores have thrived amid the coronavirus pandemic, there are reasons they'll likely see a pullback in growth over the next six months.

Here are three of the biggest. 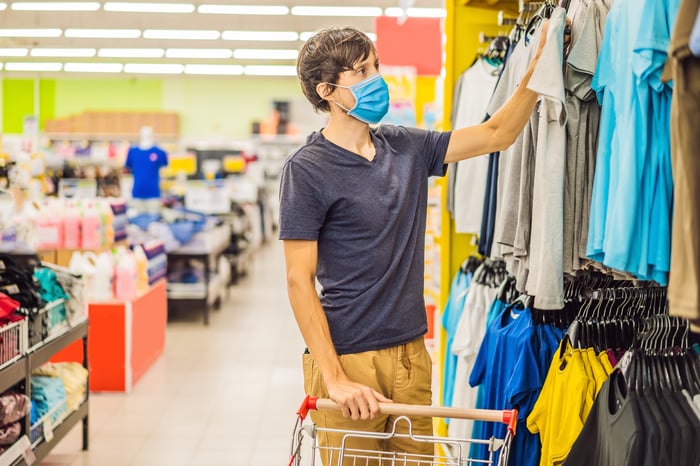 Both Target and Walmart received a nice boost in spending from government stimulus checks and canceled vacations. Consumers spent more on home entertainment last quarter as they found themselves housebound.

As local economies start reopening, people start spending more on out-of-home entertainment and dining, and stimulus checks and travel refunds run out, Target and Walmart won't see the same spending boosts they saw earlier in the year. Importantly, those discretionary purchases typically carry higher gross margin than the retailers' average sales, so it could pressure margins in the back half of the year as well.

2. Amazon's ramping back up to full strength

Amazon struggled to keep pace with demand in the second quarter, which may have sent some online shoppers to Target's or Walmart's website instead for certain items.

To their credit, both Walmart and Target have spent years improving their fulfillment capabilities to ensure fast delivery or pickup options for online orders. And both saw strong growth in activity around faster fulfillment options. Target said its curbside pickup program, DriveUp, grew 734% year over year.

But it remains to be seen if those customers will stay loyal as Amazon ramps things back up. Amazon said its fulfillment center footprint will grow 50% year over year in the second half. Its planning a delayed Prime Day in October to reinvigorate sales and test operations ahead of the crucial holiday shopping season. It'll start advertising again and doing more on-site promotion to drive incremental sales.

While Walmart and Target might've grabbed some online retail market share from Amazon last quarter, the e-commerce titan is aiming to take it back by the end of the year.

Target and Walmart undoubtedly benefited from competing retail store closures. While stores specializing in discretionary items had to close their doors, the big-box players were able to keep their doors open as "essential" stores. As a result, they were able to take a large share of in-store shopping, even if total in-store sales fell last quarter.

With competitors opening back up, Target and Walmart may see a decline in traffic or average ticket values as some shoppers look to support local businesses or just want to explore their options with other chains that've been closed.

Both companies have seen shoppers spend more per shopping trip as they buy both their groceries and discretionary items in each outing they make. But fewer shoppers are coming through the doors at Walmart, as many consumers are still trying to avoid crowded stores. Walmart's average ticket climbed 27% with transactions down 14%. Target's average ticket climbed 18.8%, and its total transactions grew 4.6%, boosted by its online sales growth.