Please ensure Javascript is enabled for purposes of website accessibility
Log In Help Join The Motley Fool
Free Article Join Over 1 Million Premium Members And Get More In-Depth Stock Guidance and Research
By Rachel Warren – Aug 25, 2020 at 6:45AM

The stock is tough in downturns and has skyrocketed since the start of the pandemic.

This year has been full of stomach-turning highs and lows for the stock market. Investing amid volatility isn't for the faint of heart, but those able to deal with the ups and downs know that this year has had plenty of buying opportunities. The pandemic-related shutdowns that have led to the current recession are quite different from the crisis around subprime mortgage-backed securities (and other regulatory issues) that prompted the Great Recession of the last decade. But by looking at a company's performance during the 2008 recession, you can better evaluate its resistance to volatility and decide if it's a good buy-and-hold stock.

AstraZeneca (AZN 0.06%) has earned a huge buzz this year, due in large part to its coronavirus vaccine candidate. The stock is relatively cheap, but up 13% this year at $56 per share, and pays a progressive dividend of 2.49%. If you're curious about AstraZeneca as a recession-resistant buy, let's first go back in time to ask: If you had invested $10,000 in AstraZeneca during the last recession, how much would it be worth today? 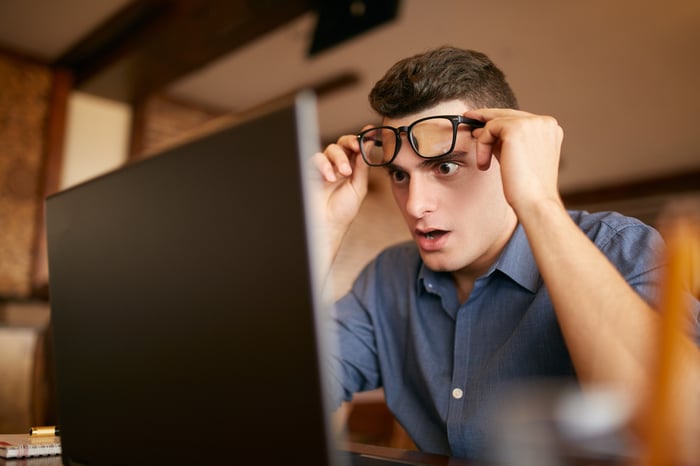 One of the interesting things to note about AstraZeneca is that the stock barely moved when the broader market spiraled downward in March. Likewise, during the Great Recession over a decade ago, the company's share price remained fairly stable. This is in part because AstraZeneca has a consistent steam of revenue from its popular drug products: Patients' need for drugs and healthcare products doesn't disappear in tough times.

For the sake of illustration, let's suppose you invested $10,000 in AstraZeneca in 2008, at the height of the recession period. Its stock price stayed in the ballpark of $20 that entire year, meaning you would have been able to purchase approximately 500 shares. The share price has since risen 164% from the start of January 2008 and almost 180% from its low. Today, your investment would be worth roughly $28,000. If you had put down a larger investment of $20,000, which would have bought you about 1,000 shares, your investment in AstraZeneca would now be valued at about $55,700. 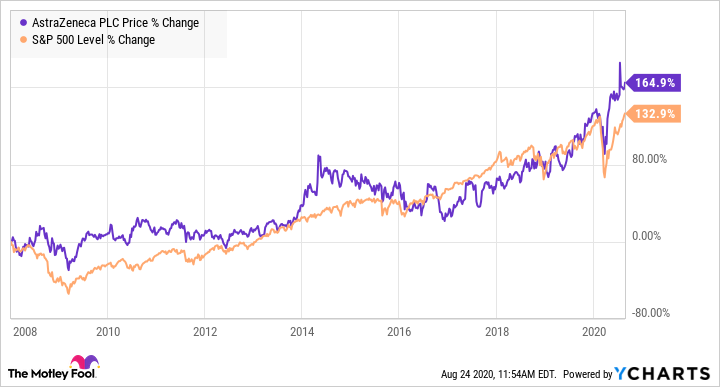 Should you buy AstraZeneca now?

There are several compelling reasons to like this stock in addition its ability to withstand market dives. First, AstraZeneca puts on a consistent financial performance. In 2019, the company's total revenue came to $24.4 billion, a 10% increase from its full-year revenue in 2018.

AstraZeneca released its financial results for the first half of 2020 on July 30, reporting $12.6 billion in revenue, 12% higher than its revenue during the first six months of 2019. The company reported significant sales growth for its new medicines. Several notable revenue drivers for AstraZeneca in the first half of 2020 included oncology drugs Tagrisso ($2 billion), Imfinzi ($954 million), Lynparza ($816 million), and Calquence ($195 million). Oncology drugs are the company's standout sales driver. Revenue from that sector increased 28% from last year's first half. Another notable product is Symbicort, a drug used to treat patients with chronic obstructive pulmonary disease and asthma. Symbicort brought in product sales of $1.4 billion in the first half of the year, almost a 23% increase from the year-prior period. AstraZeneca boasts 166 products in its pipeline. If its more popular drugs' sales ever peter out, there's a strong second string of drugs that could take their place.

The company is also working on a candidate in the ongoing race for a safe and effective COVID-19 vaccine. AstraZeneca is collaborating with the University of Oxford on the vaccine candidate AZD1222, which is undergoing late-stage clinical trials in the United Kingdom, South Africa, and Brazil. A late-stage study with 30,000 participants in the U.S. is also slated to begin in the third quarter. The potential vaccine elicited a positive immune response in subjects during an earlier phase 1/2 human study, in which 100% of the patients who received two doses of the vaccine candidate developed sufficient neutralizing antibodies. On Aug. 14, AstraZeneca inked a contract with the European Commission to provide as many as 400 million vaccine doses should the vaccine prove effective. The company also promised 300 million doses to the U.S. back in May and received $1 billion through the U.S. Biomedical Research and Development Authority (BARDA) as a component of the deal. Late-stage data regarding AZD1222 is expected to be available in the coming months.

I wouldn't buy this pharma stock stock solely because of its potential coronavirus vaccine. AstraZeneca stood strong in the face of the 2008 financial crisis, and continues to prove irrepressible in a roller-coaster year. When you factor in the company's strong financials and core portfolio of products, along with the billions of dollars a successful COVID-19 vaccine could add to the company's balance sheet, it's safe to say that AstraZeneca is a buy you don't want to miss out on.