Those headline numbers looked solid, but investors likely expected stronger growth after Pinduoduo's stock more than doubled over the past year. Pinduoduo's larger rivals, Alibaba (BABA 0.50%) and JD.com (JD 0.87%), also raised the bar with their latest earnings beats. Let's dig deeper to see why Pinduoduo's stock is slipping, and why the e-commerce underdog could be struggling to compete with Alibaba and JD. 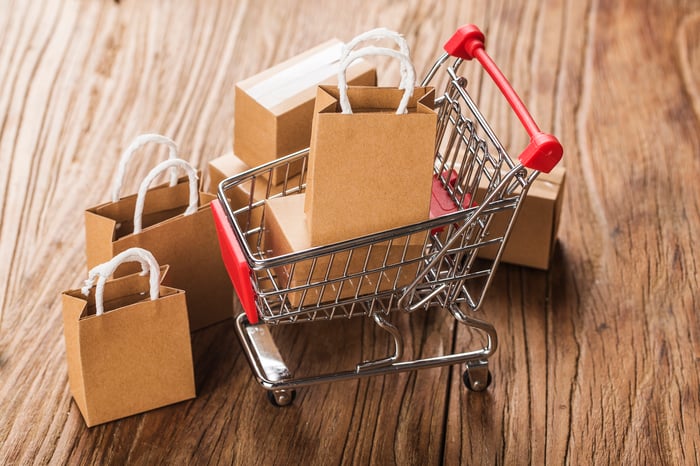 Problems beneath the surface

Pinduoduo carved out a niche in China's crowded e-commerce market by encouraging shoppers in lower-tier cities to team up for discounts on bulk purchases. That unique business model enabled Pinduoduo to surpass JD in terms of active buyers last year, but it still ranks a distant third in total revenue behind Alibaba and JD, since each of its shoppers spends less money.

Pinduoduo's monthly active users (MAUs) rose 55% annually to 568.8 million during the second quarter, but that marked its slowest MAU growth rate since its IPO in 2018. Its annual active buyers grew 41% to 683.2 million.

Pinduoduo's stable growth in buyers was promising, but its annual spending per active buyer rose just 27% to 1,857 yuan ($262.80) over the past 12 months. Its GMV (gross merchandise volume), or the value of all goods sold across its platform, grew 79% to 1.27 trillion yuan ($180 billion). Both metrics grew at their slowest rates since Pinduoduo's IPO, and suggest the company is losing its momentum:

However, Pinduoduo's revenue growth still accelerated from the first quarter, fueled by a 71% jump in its online marketing revenue (91% of its top line), which it charges merchants for listing their products.

That growth was encouraging, but it was inflated by merchants shifting their marketing spending from the first quarter, which was affected by COVID-19, to the second quarter. It also coincides with a slowdown in Pinduoduo's growth in MAU and buyer spending, which suggests its merchants are putting out too much bait while the fish aren't biting. If that trend continues, Pinduoduo's merchants will inevitably buy fewer listings.

Competition from JD and Alibaba

Pinduoduo is countering JD and Alibaba by expanding into higher-tier cities with brand-name products. However, Pinduoduo is convincing those merchants to sell their goods at lower prices on its platform, then subsidizing the difference out of its own pocket. Alibaba's Juhuasuan struck back with similar subsidies last December, then started locking merchants into exclusive deals that prevented them from listing the same products on Pinduoduo.

JD and Alibaba are firmly profitable, but Pinduoduo isn't. Pinduoduo's losses are narrowing, but they could easily widen again in a prolonged war against the two market leaders.

Questionable plans for the future

Pinduoduo didn't offer any forward guidance, but analysts expect its revenue to grow 64% this year as its bottom line stays in the red.

During its latest conference call, Pinduoduo's management repeatedly declared the company could generate fresh growth by selling more agricultural products, which accounted for 14% of its GMV last year. However, JD is also expanding into the same market. In late 2019, JD launched JD Farm, an agricultural platform built on its massive first-party logistics and data-gathering network, to directly serve Chinese farmers.

Many investors were impressed by Pinduoduo's revenue growth over the past year, but I believe its slower growth in MAUs, spending per buyer, and GMV raises red flags. It's unclear if Pinduoduo will ever generate a profit or survive a prolonged war against its larger rivals, and its sudden CEO change earlier this year could exacerbate those problems. I might be too pessimistic about Pinduoduo's future, but I'd rather stick with JD and Alibaba instead.