The three things to know about Shopify's newly public competitor.

Outside of perhaps Zoom Video Communications, no company was as well-positioned for the chaos of COVID-19 than Shopify (SHOP -0.81%). The company, which provides a platform for just about anyone to start an e-commerce business, has seen a massive reacceleration of growth as people order stuff from home.

But with that success comes competition. BigCommerce (BIGC 2.07%) has been around far longer than the pandemic, but chose to hold its initial public offering, or IPO, earlier this month. The company is often named as one of Shopify's biggest pure-play competitors. Is this something investors need to worry about?

As someone who counts Shopify as their top holding -- it makes up over 17% of my real-life portfolio -- this is a vitally important question. Here's what I found after digging. 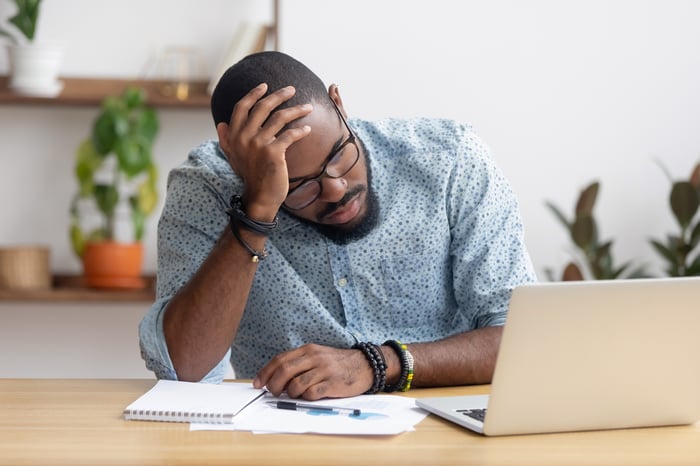 BigCommerce is much smaller than Shopify

After digging through the company's prospectus, one thing stood out above all else: BigCommerce is a bit of a misnomer. Not only is the company much smaller than Shopify, but the difference is orders of magnitude. Here are just a few ways to measure the difference.

We could start with the number of merchants (read: businesses) using these two platforms. 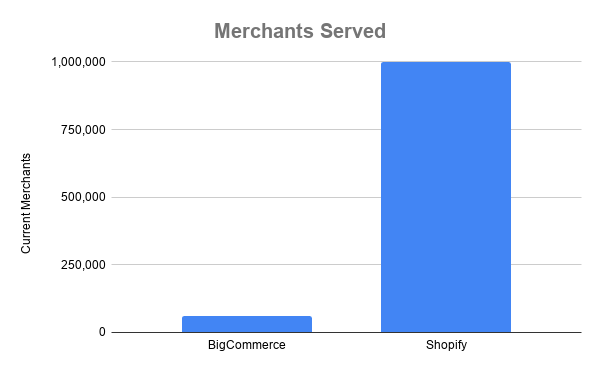 While both companies likely have larger numbers right now (they are not updated continually), Shopify is at least serving 15 times more clients than BigCommerce.

But the comparisons can go deeper. For instance, Shopify has started counting on sales-based revenue for a growing portion of cash coming in. In other words, these are lower-margin, variable sales that aren't as coveted as subscriptions, which bring in annual recurring revenue (ARR). Because of that, some could argue that Shopify's trailing sales -- which are also over 15 times higher than BigCommerce's -- isn't a great proxy for how it's performing relative to its rival.

But even when we look at ARR alone, Shopify is still head-and-shoulders above BigCommerce. 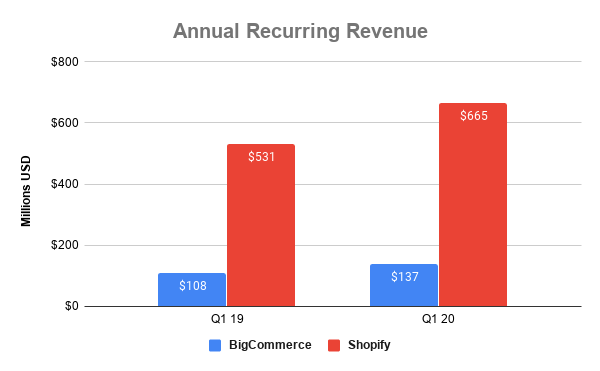 What's truly fascinating about this is that even though Shopify's ARR is almost five times the size of BigCommerce, their growth rates are almost identical -- both hovering near 25%.

A wider moat, by a country mile

"Sure," you might argue, "But each company's relative size says nothing about whether or not BigCommerce is a good investment, or if Shopify will eat its lunch." And you'd be 100% correct. In fact, it can sometimes be far more advantageous to invest in the smaller company taking away market share than the behemoth trying to defend it.

To address this issue, it's vital to look at each company's moat, or sustainable competitive advantages. Companies like this often have one key moat: high switching costs.

When a small or medium-sized business sets up shop online, its owners want to spend as little time as possible on digital logistics, and as much time as possible fulfilling their own individual missions. Much like it's a hassle for you to switch banks -- even if it costs no money -- the headaches alone can prevent a merchant from leaving these platforms.

One key metric BigCommerce published in its prospectus was its net revenue retention rate (NRR) for larger customers, which stood at 106% at the end of 2019. This means that, on the whole, merchants are not only staying with BigCommerce (NRR of 100%), but they are paying more each year. The more deeply integrated BigCommerce's platform becomes, the harder it is to switch away.

Shopify doesn't publish its NRR. But it does publish a chart that looks like this annually. 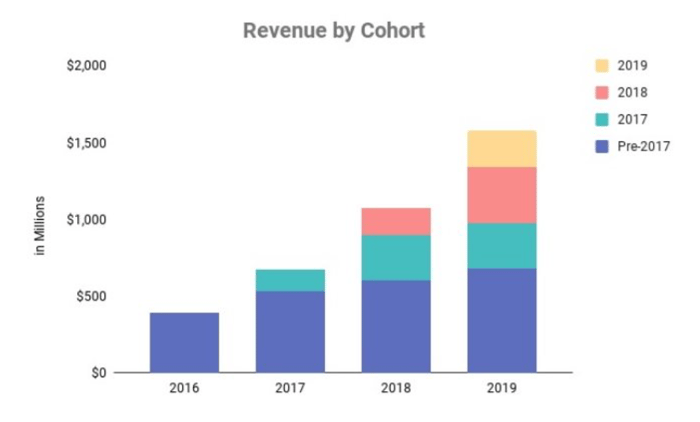 While we can't know the exact numbers for sure, it's clear that NRR is at least 100%, and likely much more. That's especially true for the 2018 cohort of businesses.

The bottom line: Neither company has a clear upper hand when it comes to high switching costs.

Shopify, however, has other advantages that BigCommerce would have a very difficult time matching. The first comes via each company's App Store. This is a place where third-party app developers create custom tools that merchants can purchase. Shopify and BigCommerce pay nothing to develop the tools, and get a cut of each sale.

Currently, BigCommerce has about 600 such apps; Shopify has over 4,600. That gap isn't likely to narrow: Because of network effects, app developers have far more incentive to build apps on Shopify's platform than BigCommerce's -- there are 15 times more merchants to sell to!

And all of this ignores what's becoming the even bigger elephant in the room: Shopify is building out a fulfillment network that gives merchants an alternative that at least stands a chance of matching Amazon. BigCommerce has no such initiative. That alone is a major competitive advantage.

Shopify has lots of cash and is free-cash-flow positive, meaning it can continue building on this head start. BigCommerce, on the other hand, has lost over $40 million in the past year in free cash flow. It cannot afford such a buildout.

The cherry on top

If you can't tell, I'm not too worried about BigCommerce after getting a chance to dive through the company's financials.

It comes as a cherry on top that Shopify is run by its founder, Tobi Lutke. I've long considered him to be one of the most mission-driven CEOs we can invest alongside in the markets today. BigCommerce's founding team, on the other hand, has moved on.

Add it all together, and I am not going to lose sleep over BigCommerce. The company and stock itself may very well go on to great gains, but I don't think they'll be at the expense of Shopify.

John Mackey, CEO of Whole Foods Market, an Amazon subsidiary, is a member of The Motley Fool's board of directors. Brian Stoffel owns shares of Amazon, Shopify, and Zoom Video Communications. The Motley Fool owns shares of and recommends Amazon, Shopify, and Zoom Video Communications and recommends the following options: short January 2022 $1940 calls on Amazon and long January 2022 $1920 calls on Amazon. The Motley Fool has a disclosure policy.