Cryoport is acquiring Chart's cryobiological business and getting a big boost from one of the giants in private equity.

The big gains come after yesterday's announcement that Cryoport was acquiring the cryobiological products business from Chart Industries (GTLS 0.75%) for $320 million. While Cryoport stock is skyrocketing, Chart shares have fallen almost 5% on the news. 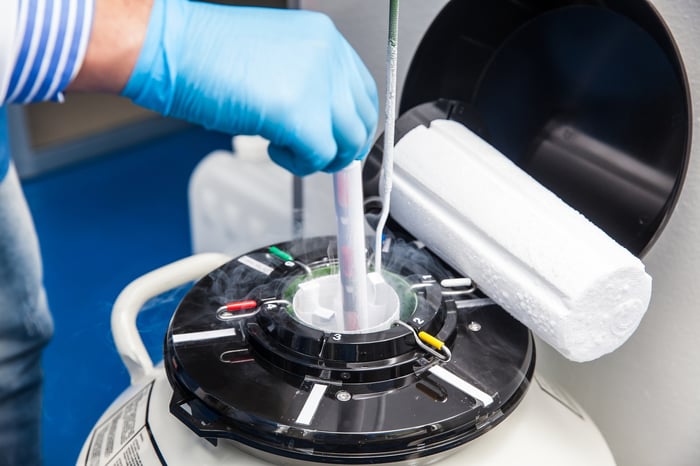 Cryoport is acquiring MVE Biological Solutions, the Chart subsidiary that manufactures vacuum-insulated products and cryogenic freezer systems for the life sciences industry. The subsidiary operates three manufacturing facilities, two in North America and one in China, and operates largely separately from Chart's other business units.

MVE generated $84 million in revenue in 2019, and Cryoport says it will be immediately accretive -- meaning it will add immediate economic value -- to its business.

Blackstone Group (BX) is helping fund the deal, via a significant investment in Cryoport. The private equity giant is acquiring $25 million in common shares and $250 million in convertible preferred stock that pays a 4% dividend, with the balance being funded from cash on Cryoport's balance sheet.

This is a huge step forward for Cryoport, which generated less than $40 million in revenue last year. The company says the market it focuses on "...is forecasted to grow 30% to 40% per year..." -- and this acquisition is a huge jump-start in establishing momentum.

Needless to say, investors like the deal for Cryoport, and likely the significant investment from Blackstone, lending credibility to Cryoport as a top prospect for growth.

For Chart, the modest sell-off says investors aren't so positive. On one hand, that makes sense; the company is walking away from a business that's growing at more than 30% per year, and one that helps diversify its end markets.

On the other hand, management's reasoning for divesting MVE is part of a broader strategy to strengthen Chart, drive down costs, and focus on its core strengths. Over the past several years, Chart has sold several business units that didn't fit within its core, instead focusing on the markets where its manufacturing competencies overlap, so that it can maximize cost and operating efficiency, and generate the best margins and returns.

Chart has also made multiple acquisitions that add to those core markets and strengthen its business. The biggest opportunity for the company is liquefied natural gas, or LNG, which is growing in demand around the world to meet energy and industrial uses.

MVE was essentially a separate business already. Not only was its manufacturing separate from all of Chart's core manufacturing, but its sales and support operations are very specialized and separate.

Put it all together, and this looks like the kind of deal that should work out for both parties. Chart continues to get leaner, while Cryoport makes a huge step forward. Between the two, Cryoport certainly has the most to lose; this single acquisition triples the size of its revenues, and that will put a lot of pressure on management to execute.

It's an overused cliche, but this very well could prove a "win-win" deal once everything shakes out in a few years.