Please ensure Javascript is enabled for purposes of website accessibility
Log In Help Join The Motley Fool
Free Article Join Over 1 Million Premium Members And Get More In-Depth Stock Guidance and Research
By Rich Duprey – Updated Aug 31, 2020 at 9:14AM

The anticipation for the switch to the next generation of cellular networks may be overblown, he says.

The stock of Apple (AAPL -3.00%) was soaring ahead of its 4-for-1 stock split today, but at least one analyst has expressed concern that the tech giant's shares have become "decoupled from fundamentals" and doubts a super cycle in iPhone sales will occur as it transitions from 4G to 5G networks.

Barclays analyst Tim Long says there is more downside risk than upside potential for Apple's stock and he is maintaining his equal-weight rating on its shares. 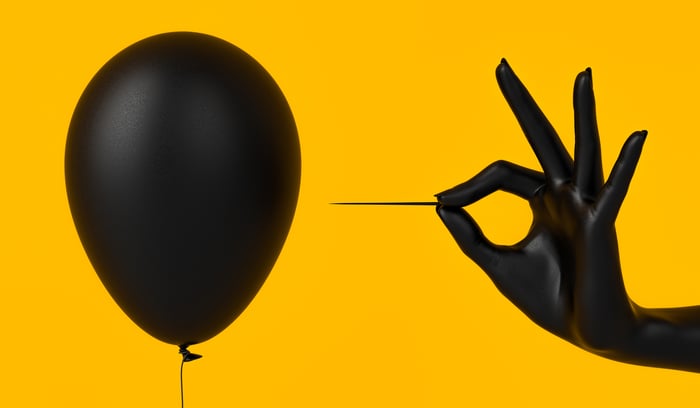 The iPhone 12 is expected to debut in September and roll out in October. With about a third of the nearly 1 billion existing iPhones in an upgrade window, there's the potential for the advent of 5G to create a super cycle of conversions.

Yet Long is not convinced, according to thefly.com, and he advises investors in a note that the experience from 5G's uptake in China and Korea suggests the hope for a massive sales wave is overblown. He says actual unit sales are not growing, and may be declining.

Long also points out the much-anticipated super cycle from 3G to 4G failed to materialize, and the first iPhone with 4G capabilities, the iPhone 5, saw the greatest deceleration in unit growth in iPhone history.

He doesn't expect the iPhone 12 to contribute meaningfully to earnings, and with Apple's shares having "vastly exceeded the change in consensus estimates," Long says, the outlook for the stock is decidedly muted.