The chipmaker's largest business segment is benefiting from two catalysts that are here to stay for a long time.

Marvell Technology Group (MRVL -3.91%) has stepped on the gas amid the coronavirus pandemic thanks to the rollout of 5G wireless networks and an uptick in demand for data center chips.

These two factors have helped Marvell ramp up its revenue growth, as evident from the company's latest fiscal 2020 second-quarter results. The chipmaker exceeded Wall Street's expectations with year-over-year revenue growth of 11% to $727 million. Adjusted earnings tripled year over year to $0.21 per share.

The double-digit top-line growth was driven by a nice jump in Marvell's networking revenue that increased 23% over the prior-year period. Marvell credited the "ongoing 5G deployments in China" and a ramp-up in the sales of custom data center chips to a new hyperscale customer for the networking segment's impressive showing.

More importantly, Marvell still has more to offer. Let's take a closer look at the reasons why this semiconductor player won't be running out of steam anytime soon.

Marvell Technology claims to have scored design wins at four of the top five original equipment manufacturers (OEMs) making base stations for 5G wireless networks. As a result, the transition to the new networking standard has helped the chipmaker record four straight quarters of sequential top-line growth in the wireless infrastructure market.

But Marvell says that its opportunity isn't limited to just global OEMs. CEO Matt Murphy pointed out during the latest earnings conference call that "there's also a very active next tier of more regionally focused OEMs who are developing their own 5G base station equipment." This indicates that Marvell's 5G base station revenue opportunity can continue expanding, especially considering that the company has already started making some headway in this tier of regional OEMs.

Marvell's OCTEON 5G processors have been chosen by a new base station customer, and the company expects to start ramping up production by the end of the next fiscal year. At the same time, the chipmaker will start shipping 5G processors to Samsung and Nokia later this year, indicating that the rollout of the next-generation network will continue to be a tailwind for Marvell.

More importantly, Marvell's 5G momentum seems here to stay as the size of the global 5G base station market is anticipated to grow at an annual rate of 50% through 2026, per third-party estimates.

On the other hand, the data center market presents another multibillion-dollar opportunity for Marvell. The chipmaker is operating in a rapidly growing niche of this space -- data processing units (DPUs). Acting as accelerators, DPUs are anticipated to play an important role in improving the speed and efficiency of data centers.

The good news for Marvell investors is that its DPU platforms are in strong demand among cloud customers. The revenue of Marvell's high-end programmable network adapter, LiquidIO programmable smartNICs, and its hardware security modules more than doubled annually in the latest quarter.

Given that the 5G base station and DPU markets still have a lot of growth to offer, Marvell's networking business can keep getting better and boost the company's financial performance. That's why investors looking for a mix of value and growth need to take a closer look at Marvell stock.

The valuation is enticing

Marvell stock has run up significantly this year, but it continues to remain cheap despite the impressive rally. 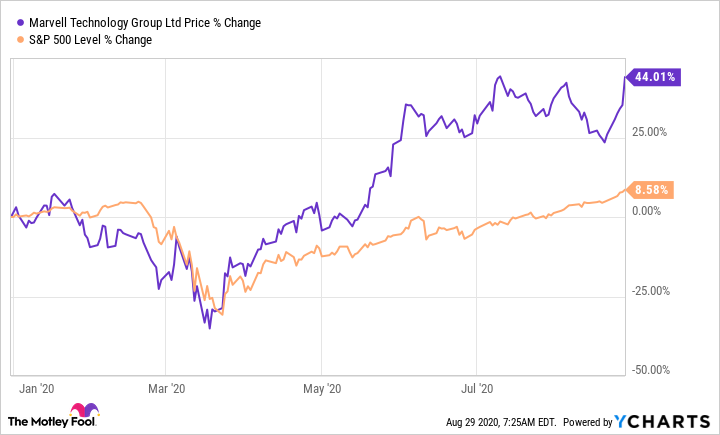 The stock's trailing price-to-earnings (P/E) ratio stands at just 16, which is nearly a third of its five-year average earnings multiple. This makes Marvell Technology stock an enticing bet right now given the pace at which it is growing. Analyst estimates compiled by Yahoo! Finance project terrific earnings growth in the forthcoming year and beyond, so it won't be surprising to see Marvell Technology remain a top growth stock going forward.