In the weeks between the announcement and the day before they began trading at split-adjusted prices, Apple shares surged 30% while Tesla's got a shocking 61% bump. These impressive gains may have investors asking two big questions: Should you buy Apple and Tesla shares in the wake of the split and, if other high-profile companies such as Amazon or Alphabet announce splits in upcoming weeks, is it smart to buy in?

The answer: It depends on your investing goals. 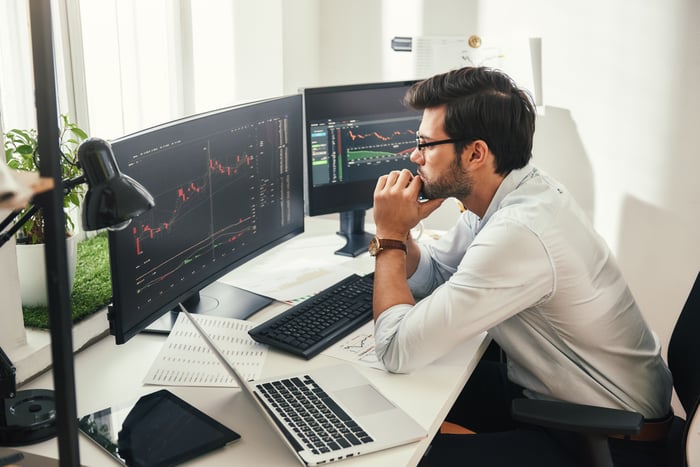 Why stock splits matter to short-term investors, but not those playing the long game

There are a few good reasons why this happens. First and foremost, shares appear cheaper so they may be more attractive to investors looking for a bargain. A lower per-share price also means investors who were previously priced out can now afford to buy in. And, when mega-brands split their stocks, it's big news both in the financial press and even in mainstream outlets. The attention companies receive can singlehandedly drive up demand and send share prices rising.

Short-term investors who want to make a quick buck can often profit from these effects. But you'll notice one thing missing from the list of reasons why splits drive share prices: a change in company value. And that's not included for good reason: Stock splits don't cause that.

When Apple, Tesla, or other companies split their stocks, it's like cutting a cake into 20 pieces instead of five -- you've still got exactly the same amount of cake. The only difference is, it's cut in smaller pieces and those who previously had one bigger slice now have four smaller ones (in Apple's case) or five smaller ones (in Tesla's case). Not only did you not change the amount of cake you have, you also didn't change any underlying ingredients. In other words, companies that split haven't altered their fundamentals, potential for growth, competitive advantages, or anything else that ultimately determines what shares are worth.

And with fractional shares making even companies with high share prices accessible to those with a small amount to invest, it's more likely than ever any gains driven by the split will be very short-term since investors unaware of fractional shares or not interested in buying shares if they can't afford full ones likely aren't the type to hold stock for long. While they may purchase shares they otherwise wouldn't have, they're likely to quickly take profits or panic sell at the first sign of losses, so their impact on share price will be negligible over time.

All of this means that for long-term investors, post-split bumps in share price aren't worth getting excited about, and worrying about whether to buy shares before or after a split isn't a game worth playing. Any gains driven solely by the split will quickly fade and the intrinsic value of the company will be what drives the share price.

And if companies that split have the ingredients that make them solid long-term investments in the first place, you aren't going to care if you paid a few dollars more or less per share by timing your purchase perfectly in response to news -- you'll just be happy with your profit in the end.