Please ensure Javascript is enabled for purposes of website accessibility
Log In Help Join The Motley Fool
Free Article Join Over 1 Million Premium Members And Get More In-Depth Stock Guidance and Research
By Keith Noonan – Sep 1, 2020 at 8:15AM

Advancements in AI are shaping the world. Let them shape your portfolio's performance.

Research firm IDC estimates that global revenue from artificial-intelligence hardware, software, and services will climb roughly 12% annually to reach $156.5 billion this year, and spending is expected to accelerate as coronavirus-related pressures ease. The firm projects a compound annual growth rate of roughly 17.1% for the category across the five-year period spanning from 2020 through 2024.

Artificial intelligence (AI) has the potential to influence almost every industry, and the overall economic impact of the tech will exceed what's spent on hardware, software, and services many times over. The great news for investors is that the artificial intelligence revolution is still in its early innings, and the beneficial impact that it will have for industry leaders is still underappreciated. 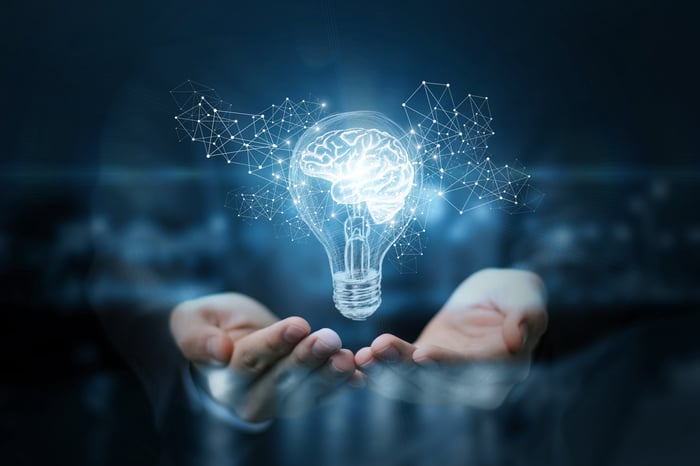 Appian provides software that allows developers to more easily create applications. Instead of going line by line and crafting complex strings of code in order to develop apps, the "low code" approach provided by Appian's platform is much more simplified. It has a more modern graphical interface and a suite of development tools that help automate development processes.

Compared with traditional software development and coding, Appian's platform has a greater visual focus and is set up to allow users to drag and drop desired features, perimeters, and characteristics for software. This potentially makes it much easier for enterprises to quickly create and launch new applications, and it is particularly useful for companies outside the technology industry that need to quickly design and deploy new business software.

With AI-powered software becoming increasingly important for success across almost every industry, it shouldn't come as a surprise that Appian's platform has a heavy artificial-intelligence component. The platform's development toolkit includes AI features that can be implemented in apps powered by the company's platform, allowing enterprise customers to integrate and analyze data and more easily automate business functions.

The company counts the U.S. Air Force, financial services company Barclays, and health services provider Cigna among its list of customers, and it has huge room for growth as it brings more enterprises onboard and sells upgraded features. Appian's business is still relatively young, and the company has a growth-dependent valuation -- with a market capitalization of roughly $4.2 billion and trading at roughly 14.5 times this year's expected sales. But its relatively small size, large addressable market, and compelling product and service offerings point to big long-term growth potential.

Xilinx specializes in programmable chips, and the semiconductor designer is currently the market leader in field-programmable gate arrays (FPGAs). These highly programmable chips enable greater flexibility and are used for a range of applications (including AI) in industries such as telecommunications, data centers, and defense and aerospace.

ACAPs can offer performance that's up to 20 times faster than today's leading FPGAs and over 100 times faster than today's top central processing unit (CPU) implementations. It can be easy to get lost in a flurry of benchmarks, specs, and actual real-world performance when it comes to analyzing the semiconductor space, but the key takeaway is that Xilinx provides best-in-class solutions that look primed to spur the evolution of artificial intelligence.

Xilinx's solutions are enabling the rollout of 5G networks, which require much more powerful hardware compared with previous wireless generations. Such a 5G network will allow dramatically faster upload and download speeds and play a big role in enabling the distributed computing that will power many AI technologies over the next decade. The company's versatile chips will also play a big role in powering AI applications directly in data centers.

Xilinx also pays a dividend, with the stock yielding roughly 1.5% at current prices and a nine-year history of annual payout growth. Shares trade at roughly 35.5 times this year's expected earnings, but that valuation could come to look very cheap as spending on 5G and AI accelerates.

Facebook might not be the first name that springs to mind when the conversation turns to artificial intelligence. But the company already uses AI for its core social media platforms, and it stands out as one of the most compelling long-term plays in the AI space.

Having access to vast arrays of valuable data is a huge advantage in artificial intelligence, and few companies have a bigger edge on that front than Facebook. This strength has helped the company craft social media experiences tailored to users' preferences and habits, thereby producing high engagement levels and boosting the value of its digital advertising service. It also uses AI to monitor and remove potentially sensitive content posted on its platforms.

Facebook's incredible reach and access to information about people's interests and how they live and communicate give it some of the most valuable data on the planet. This information is fed to the company's AI systems to improve the performance of its core services, and it could also help the social network build business in categories including e-commerce, entertainment, and fintech services. Facebook has already posted impressive growth in its run as a public company, and its massive network advantage should help it continue to be a long-term winner.