The COVID-19 pandemic has disrupted operations for companies all over the world. But some have felt the pain more than others. Apple and Huawei managed to grow their shares of the smartphone market in the second quarter of this year, at the expense of Samsung and Xiaomi. Not only did Huawei and Apple find a way to connect with consumers at a time when those consumers were distracted, they also found a way to keep their supply chains moving.

The feat is noteworthy for several reasons, not the least of which is the fact that companies' strengths and weaknesses come to light when things are tough. In this case, though, the two biggest takeaways are: (1) Apple may have finally put an end to its shrinking market share, and (2) when they're not choosing iPhones, Chinese consumers are increasingly choosing Chinese-made phones.

Just bear in mind a huge wrecking ball stands ready to destroy all the market share gains Huawei has made in just the past few years. 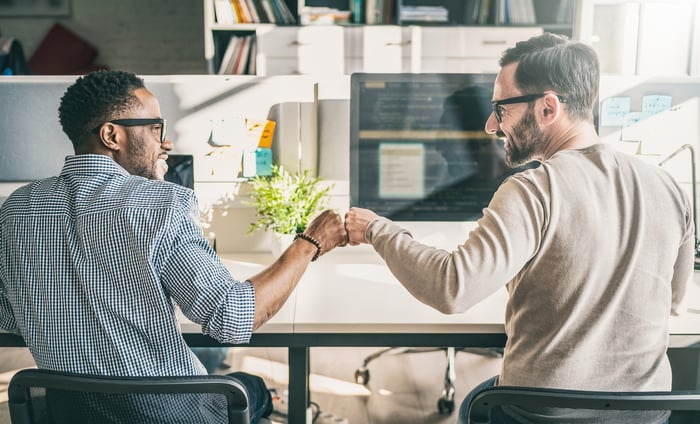 Information technology market research outfit Gartner gathered the numbers. For the three-month stretch ending in June, shipments of Huawei smartphones "only" fell 6.8%, from 58 million units to 54.1 million. Apple's iPhone shipments fell ever so slightly, from 38.5 million units in Q2 of 2019 to a little less than 38.4 million -- a 0.4% year-over-year decline. Samsung's shipments tumbled 27.1%, and up-and-coming Xiaomi's slipped 21.5%. Chinese electronic company Oppo's unit shipments were off nearly 16%.

End result? In the middle of the chaos, Apple and Huawei picked up market share.

Gartner's estimates jibe with the comparable Q2 smartphone market report from IDC. IDC's numbers, however, suggest Apple's shipments actually grew from 33.8 million to 37.6 million, leading to an even bigger gain in market share.

Both organizations agreed on one matter though: Samsung bore the brunt of the second quarter's turbulence.

China is the driver

It should be noted that China -- where Huawei is based -- was the big driver of Huawei's growth last quarter. IDC indicates that of the 55.8 million smartphones it delivered during the second quarter, 39.7 million of them were ultimately delivered to Chinese distributors. Apple made progress in China last quarter as well, but it remains a minor player in that market. It still only sold 7.3 million iPhones in China in Q2, upping its market share in that country to a still-modest 8.3%.

Even so, Apple and Huawei were the only names to grow market share in the important Chinese market last quarter.

One quarter does not a trend make, of course. Apple clearly did something right in Q2, but of all the quarters to use as evidence that it's finally gaining market share in China again (it began losing share there in 2016), the COVID-19 impacted quarter may or may not be the one. Ditto for the company's global share, which reached as high as 18.2% during the first quarter of 2015, according to IDC numbers. Losing less ground in the middle of a pandemic isn't a completely convincing victory.

A turning of the tide is a possibility to put on your radar, though.

As for Huawei, last quarter's results may have been the first time it pushed past market leader Samsung, but its market share growth is nothing new. Its 20% share for Q2 is the result of repeated progress since 2014, when it commanded less than 5% of the market.

Rivals have reason to remain worried, as the company is clearly doing something right even if most of its success is fostered from within its own country. China is home to roughly 1.4 billion people, and according to NewZoo, around 850 million smartphone users. That makes it the world's biggest market. It can't be ignored by phone manufacturers.

Hope for the best, but prepare for the worst

But, there's something investors can't afford to ignore: Huawei may be forced out of the smartphone business, creating a massive vacuum that will be filled by others.

That's a worst-case scenario ultimately rooted in a U.S.-China trade war that's frequently taken aim specifically at Huawei. That battle escalated in August when the United States' Department of Commerce and the Bureau of Industry and Security required U.S. companies to obtain a special license before supplying Huawei and its affiliates with computer chips. Ming-Chi Kuo, an analyst with Tianfeng International, fears this latest layer of restrictions has the potential to squeeze Huawei out of the smartphone market. At the very least, a lack of access to the best smartphone semiconductors would mean the loss of recently won market share. Its competition would step up to claim their piece of that share, but if Samsung's steep deterioration of market share is about more than COVID-19 turbulence, Apple then looks best-positioned to win the bulk of that business.

Almost needless to say, November's presidential election will play a huge role in whether or not such trade-related measures continue.