Believe it or not, it's possible.

Moderna (MRNA 0.48%) has sold a lot of doses of its coronavirus vaccine already. Granted, those sales hinge on regulatory approval or authorization for mRNA-1273. But we're still talking about a lot of money that could be on the way -- over $1.5 billion for 100 million doses in the U.S. alone. Add to that a deal to supply 80 million doses to Europe and an agreement that's potentially on the way with Japan to supply 40 million doses. And that could just be the start.

You could buy shares of Moderna to profit from what could be a phenomenal success for the biotech's COVID-19 vaccine. Then again, you might not have to even do that. Here's how you could own a stake in Moderna's coronavirus vaccine without even knowing it. 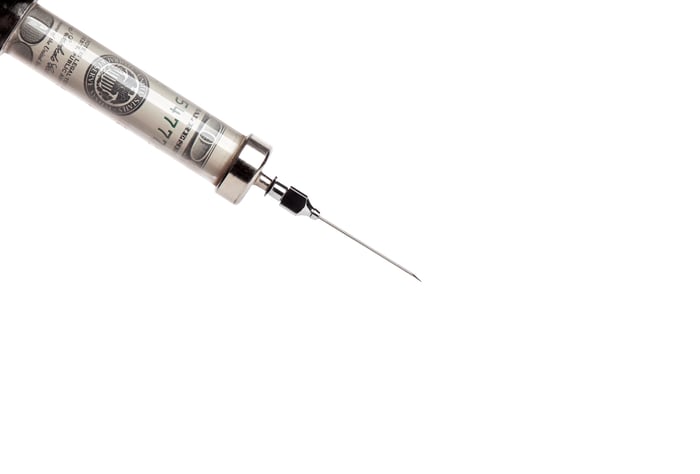 To understand how you just might own a stake in Moderna's mRNA-1273 vaccine candidate, we have to go back to 2013. That's when Moderna first received a grant of up to $25 million from the Defense Advanced Research Projects Agency (DARPA) to develop messenger RNA (mRNA) therapeutics. Moderna CEO Stephane Bancel stated at the time that the funds would "greatly accelerate our efforts to develop antibody messenger RNA therapeutics to combat a wide range of infectious diseases."

No one had heard of COVID-19 at the time, of course. But the DARPA grant helped Moderna develop its mRNA platform that was used in other vaccine programs and ultimately in creating its mRNA-1273 coronavirus vaccine candidate. DARPA certainly seems to view its funding as important to Moderna's COVID-19 vaccine: The agency stated on its website, "The first coronavirus vaccine to start human testing is from DARPA investment in the Moderna company."

In a letter sent to Secretary of Defense Mark Esper and DARPA official Amy Jenkins on Aug. 27, 2020, KEI stated that DARPA "should remedy the failure to disclose by at a minimum requiring a correction to the patent[s] and more appropriately by taking title to the patents themselves, as the sanction for the failure to disclose." It's the last part of that statement that should really catch your eye: KEI wants the U.S. government to take ownership of Moderna's patents.

Can the U.S. government legally do that? Yep. The Bayh-Dole Act includes a provision called "march-in rights," which allows the government to effectively control the patents of inventions funded by the federal government.

The bottom line is that it's possible that the U.S. government could end up owning the rights to Moderna's coronavirus vaccine patents. And it would mean that you, as a U.S. taxpayer, own a small stake in the vaccine (a really small stake, considering there are around 150 million U.S. taxpayers).

So can you simply sit back and wait for your tiny sliver of ownership in Moderna's mRNA-1273 to pay off? Probably not. It's been four decades since the Bayh-Dole Act was passed. Guess how many times the U.S. government has exercised its "march-in rights" during that period? Zero. Maybe it could happen in Moderna's case, but don't hold your breath.

If you want to drastically improve your odds of winning with Moderna's coronavirus vaccine, buy the biotech stock. Granted, there's no guarantee it will pay off. However, Moderna is one of only a handful of companies with COVID-19 vaccine candidates in late-stage testing. The biotech, as mentioned earlier, has already lined up key supply agreements with governments. If mRNA-1273 is successful in its current clinical study, your investment could pay off in a big way -- even if your investment in Moderna's mRNA program as a taxpayer doesn't.