Both are tough competitors in the coronavirus vaccine race, but which is a better overall investment?

Investors have trained their eyes on many biotech companies this year, with a particular focus on those that have a horse in the coronavirus vaccine race. Around the world, there have been more than 25 million reported cases of COVID-19 and over 852,000 people have died from coronavirus-related causes. The U.S. alone has recorded 6 million cases and over 184,000 deaths. Stay-at-home orders and business shutdowns have persisted since early March, leading to the worst economic downturn since the Great Recession. The pressure is on for drug companies to bring a safe and effective vaccine to market that can save lives and help bring people back to work.

Shares of AstraZeneca (AZN 1.21%) and Johnson & Johnson (JNJ 0.02%) are up 12% and 5.5% this year respectively, compared to the S&P 500, which has recouped its March losses and gained over 10%. But how strong are AstraZeneca and Johnson & Johnson as investments beyond their abilities to possibly produce a vaccine? As it turns out, there are other reasons to buy shares of these large-cap pharma companies. Let's dig deeper into their COVID-19 development programs and then investigate what other products drive their businesses to pick the most surefire coronavirus stock today. 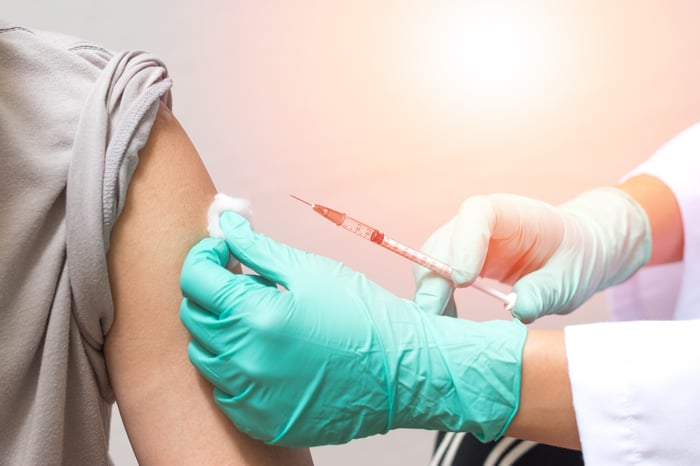 AstraZeneca is a leader in the vaccine race

AstraZeneca secured funding to develop its vaccine candidate in the form of $750 million from the Coalition for Epidemic Preparedness Innovations (CEPI) and GAVI the Vaccine Alliance, $86.6 million from the U.K., and more from Brazil and other European nations. Perhaps most importantly, the White House initiative known as Operation Warp Speed (OWS) granted AstraZeneca $1.2 billion. AstraZeneca has begun late-stage trials in the U.K., Brazil, South Africa, and the U.S. The objective of the final trial is to determine the extent of the protection the treatment can provide. It will also measure the immune response in several age groups at different doses. Eventually, the company hopes to distribute up to 2 billion doses of its vaccine.

Besides AstraZeneca's COVID-19 program, the company has a robust pipeline of existing drugs that is appealing to long-term investors. First-half results for the period ended June 30 show a 12% jump in total revenue to $12.6 billion from the year prior. AstraZeneca's oncological drugs drive this revenue performance. Cancer treatments Tagrisso, Imfinzi, and Lynparza added $3.7 billion combined to total sales. Each drug's revenue increased by 43%, 51%, and 57%, respectively from H1 2019. Respiratory treatment Symbicort, which is used to treat asthma and chronic obstructive pulmonary disease, also boosted sales. The drug added $1.4 billion to total revenue in the first half, a 23% increase from its sales in the year-prior period.

In June, AstraZeneca made an agreement with Europe’s Inclusive Vaccines Alliance (IVA) to supply up to 400 million doses of its potential coronavirus vaccine. Germany, France, Italy, and the Netherlands have helped direct and hasten the emergency effort. AstraZeneca has promised to bring in zero profit once its coronavirus vaccine comes to market, according to a press release in late July. In my opinion, AstraZeneca will fare just fine with no earnings from the potential treatment, because it will be able to rely on its stable and growing lineup of pharmaceutical products.

Johnson & Johnson has other areas of focus

At the end of July, Johnson & Johnson announced that its coronavirus vaccine candidate, Ad26.COV2-S, proved efficacious in pre-clinical studies on non-human primates. The company has started testing the vaccine candidate on humans in a phase 1/2a clinical trial in the U.S. and Belgium, which will determine its ability to evoke an immune response. The company plans to begin a phase 3 trial by late September.

Scaling up the manufacturing of a potential vaccine won't be hard for a company like Johnson & Johnson, which has ample financial resources on top of new grant funding. J&J plans to deliver more than 1 billion doses of an approved vaccine by the end of next year, having reached an agreement with the federal government to focus large scale manufacturing domestically and to deliver up to 100 million doses of its potential vaccine in the U.S. The Biomedical Advanced Research and Development Authority (BARDA) along with the U.S. Department of Defense (DoD) chipped in $1 billion total in the agreement. On top of that, OWS granted J&J $456 million to speed up its vaccine progress. Like AstraZeneca, Johnson & Johnson has stated it intends to bring its vaccine candidate to market on a not-for-profit basis as soon as it is approved by the U.S. Food & Drug Administration (FDA).

Aside from its progress in the vaccine race, Johnson & Johnson owns many popular consumer brands and boasts an array of pharmaceuticals and medical devices. Its pharmaceutical segment includes immunology drug Stelara, which saw sales jump by 8.9% from the year-ago period to $1.6 billion in the last quarter. Tremfya, a treatment for adults with moderate to severe plaque psoriasis, saw an impressive 45% year-over-year rise in revenue to over $340 million for the period ended June 30. Cancer drugs Darzalex and Imbruvica also added a combined $1.8 billion to total revenue in the quarter. Darzalex, used to treat multiple myeloma, saw its U.S. sales jump 33% year over year. U.S. sales of Imbruvica, which is used to treat various B cell cancers, rose by 21.5%.

J&J's medical device segment offers a long list of products, ranging from devices used for joint reconstruction and trauma to sports medicine and biomaterials. The deferral of many non-emergent medical procedures during the pandemic affected the segment's sales, which fell by about 34% from the year-ago quarter's $6.4 to $4.3 billion in Q2 2020. Its consumer segment, which includes popular products like Listerine, Motrin, and Tylenol, fell by 7% year over year to $3.2 billion. The company attributes the 10.8% decline in overall revenue to recent stay-at-home orders and business shutdowns. 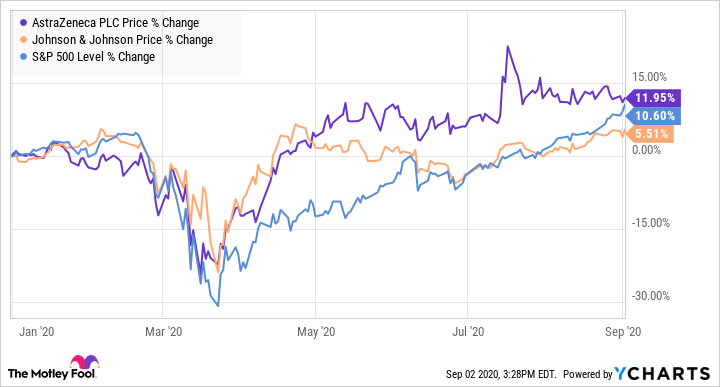 Even if AstraZeneca and Johnson & Johnson fail to develop viable coronavirus vaccines, their recession-resistant drug revenues and earnings make the case for both as a strong investment in the healthcare space. If investors are making a selection based on vaccine development alone, AstraZeneca is in a better position with its candidate's phase 3 trials underway.

But if investors wisely choose their stocks based on the overall business, Johnson & Johnson is the better pick, specifically because of its diversified business. Don't get me wrong, there is a minimal chance the pharmaceutical industry subsides or that AstraZeneca's strong line-up of oncological drugs is bested in the near future. But J&J's operations in its consumer segment provide additional diversification. The company is also a Dividend Aristocrat -- having paid a dividend to investors for more than 58 years in a row. Johnson & Johnson's dividend yield of 2.6% just edges out AstraZeneca's 2.5%. The healthcare industry giant has the necessary resources to maintain its habit of increasing payouts to investors through future times, good and bad.