Please ensure Javascript is enabled for purposes of website accessibility
Log In Help Join The Motley Fool
Free Article Join Over 1 Million Premium Members And Get More In-Depth Stock Guidance and Research
By Keith Speights – Sep 4, 2020 at 6:03AM

Yes, one or more COVID-19 vaccines could realistically be available before the end of the year.

President Trump thinks that a COVID-19 vaccine could be ready before the end of the year. He's even optimistic that a vaccine could be available around the time of the U.S. election on Nov. 3, 2020. Is this merely wishful thinking? Maybe not.

The U.S. Food and Drug Administration (FDA) recently scheduled an advisory committee meeting for Oct. 22, 2020, to "discuss the general matter of the development, authorization, and/or licensure of vaccines indicated to prevent COVID-19." The agency also said that it's "prepared to rapidly schedule additional meetings of this committee upon submission of any applications as appropriate." In addition, FDA Commissioner Stephen Hahn stated in an interview with the Financial Times that he's willing to fast-track emergency use authorization (EUA) of a COVID-19 vaccine even before phase 3 testing has completed.

Add all of this up, and we've got a real possibility that one or more coronavirus vaccines could be available in the U.S. by the end of 2020. But which ones? 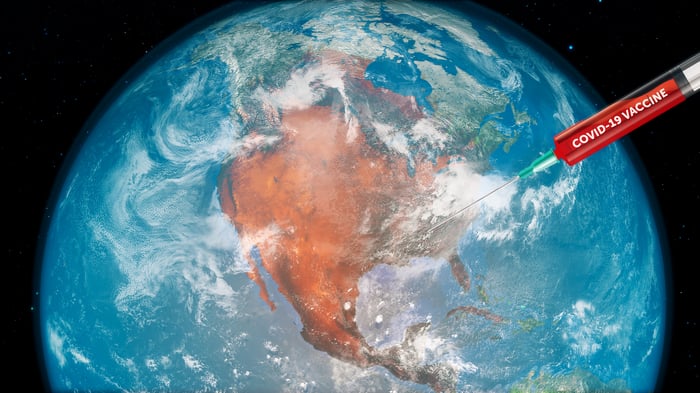 Pfizer (PFE -0.91%), along with its German partner BioNTech (BNTX 0.96%), appears to be the most likely company to launch a coronavirus vaccine within the next four months. The two companies began phase 2/3 clinical testing of their lead candidate, BNT162b2, on July 27.

This pivotal study won't wrap up by the end of 2020. However, Pfizer and BioNTech have stated publicly that they're on track to file for regulatory review "as early as October 2020." Pfizer CEO Albert Bourla told The Washington Post, "We will go for regulatory approvals in October."

Don't expect a full FDA approval for BNT162b2 this year. Still, based on FDA Commissioner Hahn's comments, it wouldn't be surprising if an emergency use authorization is granted for Pfizer's and BioNTech's vaccine -- assuming the phase 2/3 study goes well. The two companies are set to supply up to 100 million doses by the end of 2020.

AstraZeneca (AZN -0.13%) stands out as another big drugmaker with a pretty good chance of introducing its COVID-19 vaccine in the U.S. before the end of the year. The British pharmaceutical company and its partner, the University of Oxford, recently initiated a U.S. phase 3 study of vaccine candidate AZD1222 across all adult age groups.

Last week, the Financial Times reported that the Trump administration was evaluating the possibility of fast-tracking emergency use authorization of AstraZeneca's COVID-19 vaccine candidate. The company denied any discussions with the U.S. government regarding any authorization for AZD1222, calling any speculation "premature."

However, this scenario doesn't seem to be unrealistic. AstraZeneca inked a deal earlier this year to supply at least 300 million doses of its COVID-19 vaccine to the U.S. beginning in October 2020. The company also has a commitment to supply 100 million doses to the U.K. starting in September.

Moderna (MRNA 0.15%) is the only other company with a COVID-19 vaccine candidate in late-stage testing that isn't based in China or Russia. The biotech kicked off a phase 3 study of mRNA-1273 on July 27.

How quickly could mRNA-1273 be ready to receive FDA emergency use authorization? Moderna CEO Stephane Bancel stated in an interview with CNBC in July that late-stage results could be available in October under a "really optimistic scenario" or potentially in November. If he's right, the company could secure an FDA EUA before the end of the year.

Moderna teamed up with Catalent to produce an initial 100 million doses of mRNA-1273 for the U.S. market. The company expects to begin shipping these doses sometime in the third quarter of 2020.

If any of these COVID-19 vaccine candidates proves to be safe and effective and launches in the U.S., the biggest winner of all will be Americans who are ready for the pandemic to be over.

Which company will be the biggest winner, though, depends on how you define winning.

Pfizer and BioNTech stand to receive the most money initially. The U.S. government will pay the two drugmakers $1.95 billion for 100 million doses if BNT162b2 secures FDA approval or emergency use authorization. That total is higher than the $1.525 billion that Moderna will get from the U.S. for supplying 100 million doses. AstraZeneca already received a commitment from the U.S. government of up to $1.2 billion that included supplying at least 300 million doses of AZD1222, though the company has promised not to profit from its vaccine during the pandemic.

However, the biggest winner in terms of stock performance will most likely be Moderna. The company is a lot smaller than Pfizer and AstraZeneca. While Moderna is larger than BioNTech, it doesn't have a partner that will take a big chunk of any money made from its vaccine. Sure, the biotech stock has soared this year. But if mRNA-1273 launches in the U.S. within the next several months, Moderna's shares will almost certainly move much higher.