The so-called FAANG stocks had a rough week at the start of September 2020. A broad market rout drove their share prices sharply lower on Thursday and Friday at an average drop of 7.1% for the group of five leading technology companies. The S&P 500 market index only fell 4% lower in the same period: 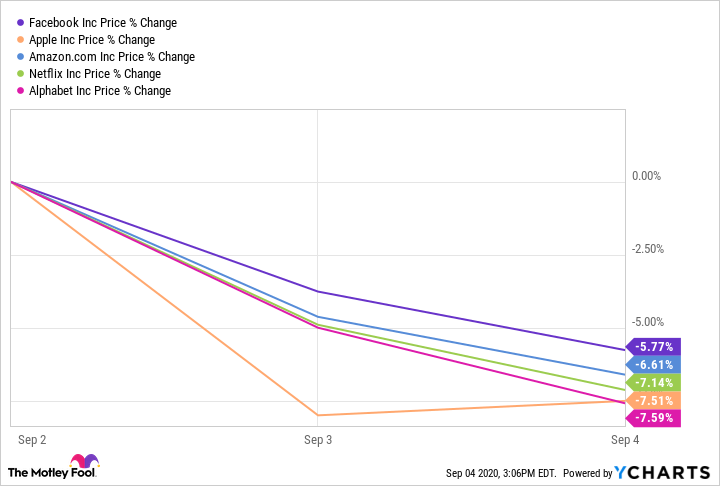 Seven percent might not seem like a lot, but that's actually a huge sea change when you're looking at stocks with absolutely massive market capitalizations. Let's take a closer look at the numbers:

That adds up to $354 billion of erased market value in the span of two short days. If you took Netflix out of the public markets, that would do less damage to the market as a whole than this week's dramatic drops among the five FAANG stocks.

It's not the end of the world, either. Netflix, Alphabet, and Facebook dropped back to share prices not seen since August 25, less than two weeks ago. Amazon investors stepped one day further into the past, landing at stock prices from August 24. Apple's drop erased the gains its stock had made since August 20. From this perspective, we're looking at a mild correction that only shaved a few days' worth of market gains off of each FAANG ticker.