SolarEdge's prospects surely look promising. But is the stock a buy at the current price?

With an impressive average revenue growth of 45% since its IPO, SolarEdge Technologies (SEDG 1.52%) sure looks a promising stock in the solar energy space. An ever-increasing focus on cleaner and renewable sources of energy globally makes solar companies attractive. Unlike oil and gas, solar companies have significant long-term growth prospects. However, is the expected growth already priced in SolarEdge stock?

SolarEdge's optimized inverter solutions aim to maximize power generation from a photovoltaic system, while lowering energy costs. The company's inverters and products are sold in more than 100 countries globally. SolarEdge has a strong position in the inverters and optimizers segment. The company is expanding its offerings in the energy storage systems, electric vehicle components, and uninterrupted power supply, or UPS, solutions. 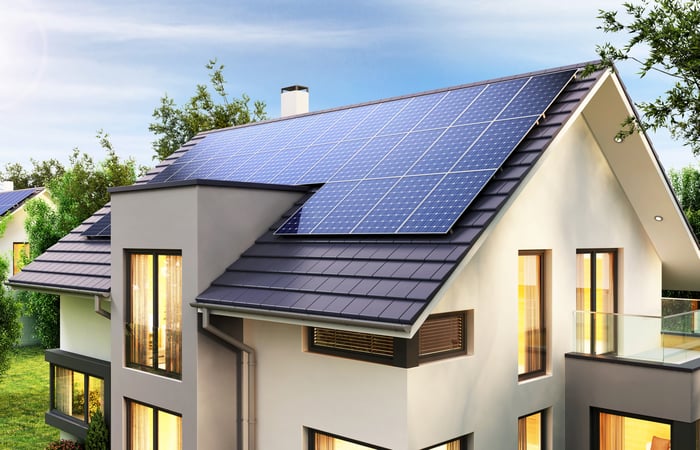 Increased efficiency of solar panels has resulted in lower costs of energy per unit, resulting in their increased adaptation. The U.S. Energy Information Administration expected 13.5 gigawatts of solar capacity to come online in 2020 in the U.S. alone. It accounts for nearly one-third of the country's all new capacity expected to come online in the year.

However, quite a few solar PV projects have been delayed due to the COVID-19 pandemic. According to the EIA, in March and April, 53 solar PV projects, totaling 1.3 GW of capacity, were delayed because of COVID-19. While that looks bad, it surely is a near-term blip rather than a trend.

In the longer term, the prospects for solar power are very impressive. The EIA projects that renewables will provide nearly 50% of the world's electricity by 2050. Moreover, among the renewable sources, the EIA expects solar energy's share to grow the most. Declining costs and resource availability are among the key drivers of growth of electricity generation from solar sources. Solar resources usually follow predictable daily and seasonal generation patterns. Moreover, relatively simple technology also makes generation from solar PV economical. These trends and projections are an obvious positive for SolarEdge.

Though SolarEdge's second quarter performance was affected by COVID-19, the company is seeing positive trends, especially in its key European markets. Still, SolarEdge expects COVID-19 to continue affecting its performance in the third quarter. It expects revenues to fall 18% compared to the year-ago quarter. That would still represent a slight sequential rise from the second quarter. SolarEdge expects its gross margin to be between 32% to 34%. Like in the second quarter, the expected third quarter margins are lower than average margins of around 35% in the previous four quarters.

Overall, SolarEdge's performance since its listing in 2015 has been impressive. With recovering economic activity, the company should be able to resume growth at pre-COVID levels in a couple of quarters. 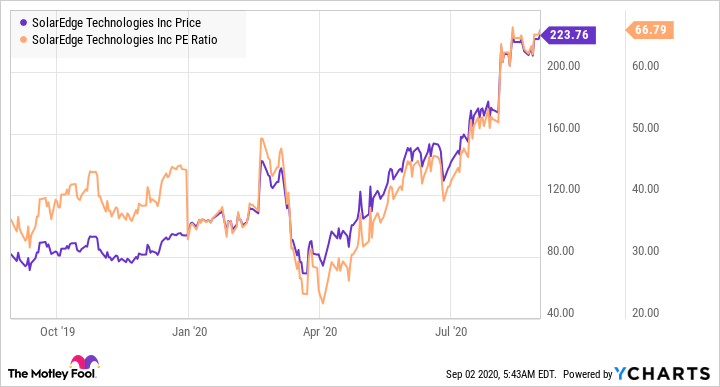 SolarEdge stock has nearly tripled in the last year. The stock's steep rise has pushed its price-to-earnings ratio to around 66 times, way higher than the market's multiple. Despite higher expected growth, this makes it an expensive stock to buy right now.

In addition to near-term COVID-19 effects, the company faces stiff competition from other players in both domestic and international markets. For example, in Europe, SolarEdge typically generates lower gross margins due to competition from European and Chinese manufacturers. Similarly, SolarEdge has yet to prove itself in the rapidly growing power storage products segment.

Having said that, SolarEdge does have a definite advantage in the optimizers and inverters segment. The company can surely succeed in storage products as well. Overall, it looks well-positioned to grow in the long term. However, the stock looks a bit too pricey at the moment.