Shares of Freshpet (FRPT -0.22%) were among the market winners last month as the maker of fresh and natural pet foods posted better-than-expected results in their second quarter earnings report at the beginning of August. That report, along with bullishness in pet stocks, helped lift Freshpet shares up 18% for the month according to data from S&P Global Market Intelligence.

The chart below shows the stock's trajectory in August. 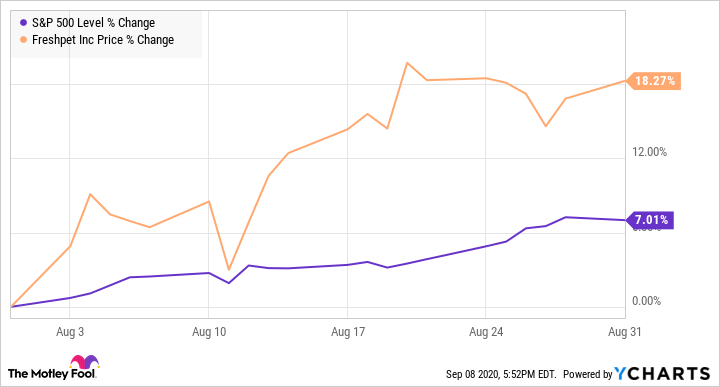 Freshpet shares gained 4% on Aug. 4 following its earnings release. During a quarter where consumers largely stayed home, the company still delivered 33.2% revenue growth to $80 million, beating estimates at $77 million, which was actually its strongest quarterly growth in nearly five years, a reflection of consumers focusing on their pets during the crisis and of Freshpet gaining market share.

The company converted those additional sales into strong growth on the bottom line as adjusted EBITDA jumped from $1.2 million to $11.2 million. Freshpet also broke even in earnings per share compared to a loss of $0.16 a year ago and expectations of a loss of $0.06 per share.

Following the report, several analysts raised their price targets on the stock, pleased with the results. Later in the month, Freshpet announced a multiyear corporate governance plan, though that did not seem to affect the stock.

Pet products are a recession-proof industry, and there is some evidence that consumers spend more on their pets during tough times. During the pandemic, with limited options for spending money, this appears to be the case as pet adoptions soared early in the crisis, and stocks like Chewy and Freshpet have thrived this year as Freshpet stock is up 79% year-to-date.

Its focus on fresh food has delivered consistent growth over the years, and that seems unlikely to change during the current crisis.