Often, when investing in growth stocks, the narrative propelling a company forward can be temporarily more important than its numbers. But sometimes, the most important narrative is the very story the numbers are telling us. This is true for Zuora (ZUO -1.05%), which provides a platform for businesses to easily adopt subscription billing for their products and services.

Zuora reported a top-line increase of 8% year over year in its fiscal second-quarter 2021 earnings report released on Sept. 2. Yet an anemic revenue outlook for the third quarter dismayed investors: The ZUO symbol lost 36% of its value over the next two trading days. Management projects revenue of between $73 million and $75 million next quarter, which, if achieved, will barely scrape by the fiscal third-quarter 2020 top line of $71.8 million. The forecast is a symptom of a more significant near-term issue illustrated by Zuora's financial statements. 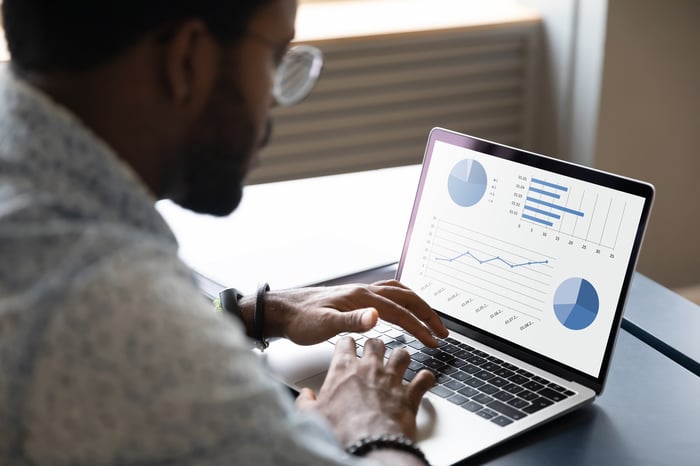 A surprising lack of operating leverage

Zuora's flattish outlook highlights a recent concerning trend: It's unable to generate healthy operating leverage (the benefit derived from higher sales, lowered expenses, or both). This is partly due to its lack of sales momentum, but it's also a result of the way management is managing operating expenses.

Let's arrive at some context by looking at a few items from Zuora's comparative income statement for the first half of the fiscal year:

This table reveals a real bright spot in year-to-date earnings. Though revenue expanded by more than 11%, the software provider's cost of sales was essentially flat versus the comparable period, leading to an increase in gross profit of $15.4 million and a powerful advance in gross margin of 520 basis points, to 56.1%.

Yet the benefits from a constrained cost of sales is lost "below the line" (i.e. below the gross profit line on the income statement). The following table begins with gross profit and subtracts out operating expenses as listed in Zuora's fiscal second-quarter report:

On the positive side, operating loss declined by roughly $3 million in the first half of the year, as the growth in gross margin outstripped expansion in operating expenses, leading to a smaller loss -- so the company did furnish minimal operating leverage.

But the control of operating expenses seems questionable. Instead of reining in general and administrative expenses, or overhead, this spend jumped by nearly 32% year over year. Conversely, sales and marketing spend only increased by 8%, 3 percentage points less than the 11% top-line growth rate.

Similarly, research and development spend, so necessary for future revenue growth, rose only 3.4%. While two quarters don't comprise a huge trend, so far this year, Zuora appears to be leaning on the wrong categories to generate operating leverage. It's potentially underinvesting in research and development (R&D) and sales, while allowing controllable overhead to balloon.

The distribution of operating expenses perhaps wouldn't be a huge issue if Zuora enjoyed a revenue growth rate close to many other software-as-a-subscription (SaaS) peers, say, at least in the high teens. But so far this year, the top line has barely scraped double-digit expansion, and it's set to curb abruptly in quarter three.

What needs to change going forward

Zuora still has the means to generate vigorous revenue growth. The number of customers with annual contract value (ACV) of at least $100,000 grew 14% year over year to 645, at the end of the quarter. And Zuora launched an analytics suite in the second quarter to add value for current and prospective customers.

But as of late, the company has stumbled on the revenue front. This quarter, its dollar-based retention rate (i.e. customer retention based on aggregate customer dollar spend) dipped by 4 percentage points from the previous sequential quarter to 99%, as it "saw a number of customers leave [our] platform due to business failure, bankruptcy, and M&A [mergers and acquisitions]."

While some customer churn is to be expected in a pandemic, Zuora hasn't been able to capitalize on its value proposition as a revenue subscription accelerator, even as companies of all sizes are focusing on digital transformation by necessity in 2020. Zuora's churn stands in relief to many other SaaS providers, which have only grown stronger in the current environment.

In short, Zuora's revenue weakness has been exacerbated by a lack of strong expense discipline so far in 2020, and shareholders would probably endorse a swapping out of some overhead expenses for a higher R&D and sales and marketing outlay. While Zuora still exhibits a decent amount of long-term potential, in the near term, it must find a way to catalyze its business -- and by extension, investor confidence.