Please ensure Javascript is enabled for purposes of website accessibility
Log In Help Join The Motley Fool
Free Article Join Over 1 Million Premium Members And Get More In-Depth Stock Guidance and Research
By Billy Duberstein - Sep 9, 2020 at 7:00AM

With its impressive growth track record and interest from Warren Buffett himself, this upcoming IPO should be at the top of every tech investor's watch list.

Investors in general -- and technology investors in particular -- are always looking for their next multibagger opportunity. In the past five years or so, a number of cloud-based software companies have gone public, with several going on to produce truly jaw-dropping returns. Here are just a few examples:

Among the numerous technology companies that have filed S-1 documents recently in preparation for their initial public offerings, Snowflake (NYSE: SNOW) appears to be the one that technology investors are truly excited about. Just last night, Snowflake announced its pricing range, and also revealed a pair of companies that will be taking stakes in its IPO. One is Berkshire Hathaway (BRK.A 0.56%) (BRK.B 0.46%) -- a somewhat shocking move, given Warren Buffett's well-documented reluctance to buy expensive growth stocks right when they go public. The other is salesforce.com (CRM -1.00%) -- and given that company's propensity toward pricey acquisitions, its interest here shouldn't be too shocking at all.

Judging by its current mouthwatering growth rates, there's good reason for all the enthusiasm. But could this "unicorn" become a millionaire-maker stock for retail investors after it hits the New York Stock Exchange? 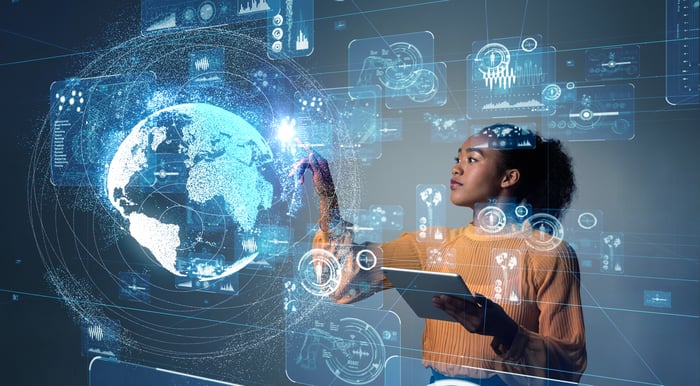 Snowflake capitalizes on two of the biggest trends in enterprise technology today: big data processing and the public cloud. Its core product is a cloud-based data warehouse that works seamlessly across the three major public clouds, in contrast to legacy data warehouses that were initially designed for use with on-premises data centers. The company has expanded from its initial offering, and now provides a unified big data querying, governance, and services suite.

Basically, organizations can take all of their data, whatever the source, and easily make sense out of it by dumping it all into Snowflake's system. Those services are apparently adding lots of value to organizations in an era when such data is being gleaned for insights that underlay nearly every type of business decision.

The first things that jump out about Snowflake are its ridiculous growth rates. Check out these stats:

Those are some crazy good numbers, even more so considering that Snowflake is no small business anymore: Its revenue run-rate is on course to exceed $500 million this year. The company did lose $174 million in the first six months of its fiscal year, which began on Feb. 1, but that was an improvement over the prior-year period, both in absolute terms and in terms of margins.

And Snowflake's revenues pale in comparison with what it outlines as its total addressable market opportunity. Management asserts that the company is disrupting three different but related end markets: analytics data management, integration platforms, and business intelligence and analytics tools. The company cites IDC statistics that show a total market of $56 billion for those segments in 2020, and a forecast for those markets to hit $84 billion by the end of 2023.

Management teams do tend to exaggerate their total market opportunities -- especially when they're advertising their stock -- but even a smaller addressable market could still provide Snowflake with plenty of room to grow.

Snowflake seems to have capitalized on the demand for cloud-based analytics by optimizing its technology for the public cloud, making it extremely easy to use, and requiring zero maintenance. It allows organizations to manage massive quantities and diverse types of data across all three major public clouds in one easy-to-use, secure platform. The company was founded in 2012: It appears that its founders foresaw the coming shift to the cloud, which explains why they were the first to build a data warehouse platform optimized for cloud computing.

Due to the network effects that apply in the enterprise software space, in which leading solutions often become even more widely adopted because people have trained on them and are used to them, Snowflake appears to have a fair amount of stickiness as the leading purely cloud-based data warehouse. And even though its three key cloud partners all offer similar types of services, Snowflake's "cloud-neutral" posture seems to be resonating. It's similar to the way that MongoDB's cloud database has taken off, even though all the major cloud providers provide their own static databases.

Another advantage for Snowflake may be  its management. The company was founded by Benoit Dageville and Thierry Cruanes, both of whom came from on-premises database and data warehouse leader Oracle (ORCL -0.49%), and Marcin Zukowski, a co-founder of Dutch data start-up Vectorwise. I always like it when employees from an industry leader think there's a better way to do things, and then go off to accomplish it. They usually have the expertise and technology chops to make it happen, and that appears to be the case here.

Interestingly, Snowflake's co-founders have always hired outside CEOs with significant administrative experience, which could be another reason why the company has accomplished just as much on the sales and marketing execution front as it has with its technology. Current CEO Frank Slootman was just hired out of retirement in April 2019. He has extensive executive experience and was formerly CEO of ServiceNow (NOW -3.25%), one of the leading cloud-based, back-end software vendors for large enterprises. Slootman is highly regarded, and during just six years at ServiceNow, he grew the company's revenues from $75 million to $1.5 billion. The fact that Snowflake was able to lure him out of retirement also says something about the company's prospects.

Based on the current numbers, it appears that Snowflake has all the attributes of a potential millionaire-maker stock, but there are a few factors that give me pause when it comes to recommending investors buy into its IPO outright on day one.

First, it appears as though Snowflake will hit the market with a sky-high valuation. Tuesday night, the company announced it would be pricing its stock between $75 and $85 per share, or a valuation of $21 billion at the midpoint. Assuming the company takes in $500 million or so in revenue this year, that would put its price-to-sales ratio over 40.

Such a valuation would come close to those of the most expensively priced technology stocks in the market, such as Shopify (P/S of 56) or Zoom Video (P/S/ of 86). In addition, the companies I mentioned at the top of the article all came public at a time when cloud software stocks weren't given the premiums they are today, and Snowflake has been a private company for a longer period. As such, it's possible much of the good news about the business -- and there appears to be a lot of it -- is already baked in.

Second, I'm still a bit unsure about the risks presented by potential competitive threats from Snowflake's big cloud partners, each of which has their own data warehousing tools, or even the founders' former employer, Oracle. Those cloud vendors could eventually allow interoperability across their rivals' systems as Snowflake does, which could allow them to cut into Snowflake's market share. So far, they haven't posed a big threat to Snowflake, but given Snowflake's sky-high high valuation, everything will need to go nearly perfectly in order for the investment to become a multibagger.

Still, it's very reassuring that both Salesforce and Berkshire Hathaway will be taking stakes in the IPO, which certainly seems to tilt things in favor of Snowflake's moat being stronger than it may even appear, and its market opportunity being as large as it says. Each of them will be buying $250 million worth of stock at the IPO price, and Berkshire will be buying out an existing stakeholder for an additional $320 million or so. The move is somewhat shocking for Berkshire, as this is the first real U.S. technology company Berkshire will have invested in that is also a high-growth, expensive-looking, money-losing venture. Salesforce, meanwhile, has a history of successful but expensive-looking tech acquisitions, such as Mulesoft in 2018 and Tableau last year.

Thus, it appears that Snowflake looks like the real deal, as evidenced by its enormous growth rates, customer adoption, and expansion metrics, and high-profile investors. I wouldn't bet against Snowflake doing quite well for public shareholders, even if they buy at an expensive-looking sales multiple.

However, public shareholders should be aware that when Snowflake opens for trading to the public, its price may instantly spike higher.  I'd be much more enthusiastic about opening a position if that jump doesn't push it too much higher than the listed IPO price... but that may be wishful thinking.