Most investors wish they had bought a consumer discretionary stock like Starbucks (NASDAQ:SBUX) on the ground floor. They have good reason to think that. Investors who discover new lines of business and purchase stock in the emerging industry leader can end up with outsized returns over time. Let's see how that benefited Starbucks investors, and what stockholders can learn from the coffee giant.

Starbucks launched its IPO in 1992 at a nominal price of $17 per share. Since that time, the stock has undergone six two-for-one stock splits. Adjusting for those splits takes that opening stock price to just under $0.27 per share.

Had one bought $10,000 worth of Starbucks stock in 1992, that individual would have purchased 588 shares. The six stock splits over the last 28 years turn that position into 37,632 shares. Starbucks traded at $86.27 per share at close on Wednesday, which amounts to just over $3.2 million! 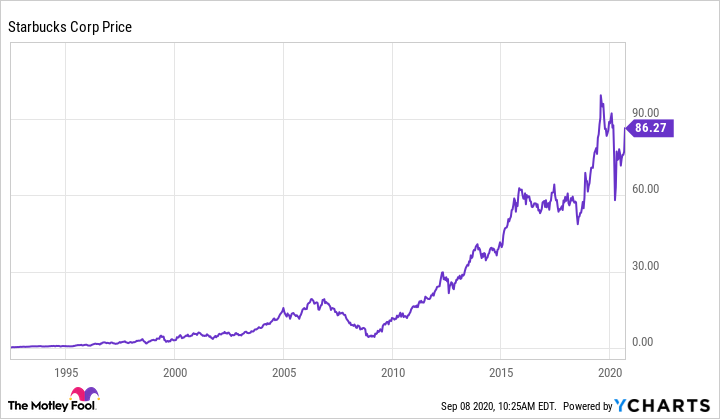 In an IRA, this could have easily funded a retirement. Best of all, this retirement could have come without selling a single share. This is possible because of the stock's dividend income. Today, Starbucks investors earn $1.64 per share annually. At that rate, the dividend pays more every quarter than their initial investment. This quarterly dividend of $0.41 per share would bring in $15,429 every three months, or $61,716 per year in annual returns.

This far exceeds the 1.9% dividend return new investors earn today. It also assumes investors did not purchase additional shares with the dividend income. Starbucks first introduced the dividend in 2010 and has increased it every year since payouts began. 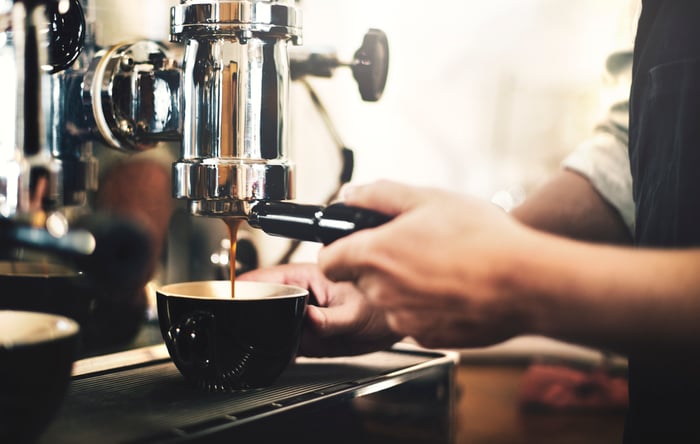 Changing the way the world enjoys coffee makes those continued increases possible. Starbucks achieved this growth by pioneering the concept of the coffee shop in the United States. Yes, coffee has remained a popular beverage in the U.S. for as long as anyone can remember. However, for most of that time, it was an afterthought, merely a secondary offering along with meals.

Howard Schultz changed this. He spent time in espresso bars in Milan, Italy and believed this concept would take off in the U.S. He was right, and the idea grew quickly, first in the U.S. and then internationally. Although its success spawned national, regional, and independent competitors, none could unseat the coffee giant. At the time of the IPO, Starbucks had opened only 165 locations. Today, the company now operates over 32,000 stores across the globe, and this number grows by the day.

Prospective buyers may wonder if this daily growth can spawn another 325-fold increase in a new Starbucks investment? Such a return is doubtful.

However, the growth story will likely continue. China is already Starbucks' second-largest market. With a population more than four times that of the United States, China offers the potential to become the company's largest market. Also, if Starbucks finds a way to repeat that feat in India, a country with nearly as many people as China, its current growth pace could continue for a long time to come.

Still, despite Starbucks' remaining potential, the real lesson is understanding the power of game-changing concepts. Finding such ideas early requires a certain mindset, and that way of thinking could lead some investors to the next Starbucks.

If You Invested $10,000 in Stabucks' IPO, This Is How Much Money You'd Have Now @themotleyfool #stocks $SBUX Next Article
Current