This new feature, paired with a more affordable Apple Watch, gives the tech giant's smartwatch the potential to become a family favorite device this holiday season.

Product announcements at Apple's (AAPL -2.63%) special event today were mostly in line with what the rumor mill had expected, including a new Peloton-like workout-subscription service called Apple Fitness+ and new smartwatches and tablets, among other news. But one announcement was particularly notable for parents who are more hesitant about giving their kids access to smartphones: Family Setup.

Investors in the tech company are likely pleased with this new feature as well. Family Setup, which allows kids to use an Apple Watch that is set up using their parents' iPhone instead of requiring each child to have their own iPhone, makes Apple Watch more appealing to a wider audience.

Here's a look at Family Setup -- and why investors should care. 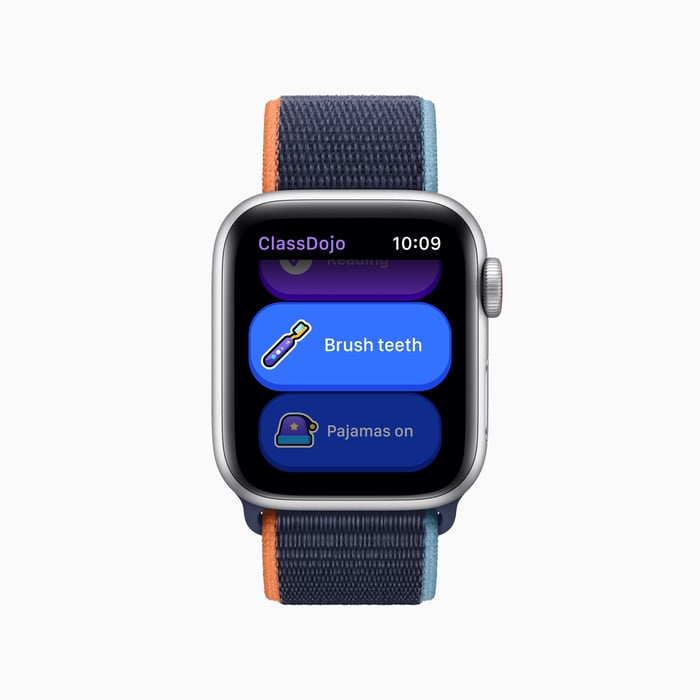 Until now, every Apple Watch needed to be paired with an iPhone. This was a problem for many families for two reasons. First, some parents are hesitant to give their children smartphones. Second, some families may not have been able to justify the expense of buying both iPhones and Apple Watch devices for their kids just so their kids could use an Apple smartwatch.

Family Setup, however, breaks down these walls.

"For the first time, Apple Watch can be set up through a parent's iPhone, so kids can connect with family and friends through phone calls and Messages, stay motivated with personalized Activity goals, and express their creativity through custom Memoji," Apple said in a press release about the new feature.

Importantly, parents will also be able to control their child's use of his or her Apple Watch. Not only will Family Setup let parents limit their child's contacts, but it introduces a new mode called Schooltime in which a yellow circle is displayed on the Apple Watch that lets parents and teachers know that the app is in a restricted mode with Do Not Disturb turned on.

Of course, to enable cellular services for Apple Watch, users will have to pay for a cellular plan for the device.

"For convenience, parents can also set the schedule on their iPhone so Apple Watch automatically goes into Schooltime during certain hours, or turn it on from the Control Center on the child's watch," Apple said. The new device starts at $279. This compares to $399 for Apple's new Series 6.

Together, Family Setup and Apple Watch SE set the tech giant up well to further capitalize on the growth opportunities in one of the fastest-growing areas of its business. Even during Apple's COVID-impacted fiscal third quarter, wearables sales (Apple Watch, AirPods, and Beats headphones) grew by a "strong" double-digit rate year over year during the period, setting a revenue record for a non-holiday quarter, said Apple CEO Tim Cook in the company's earnings call. More and more people are buying Apple Watch. Three-fourths of customers who purchased the device in Apple's most recent quarter were new to the product, Cook also said.

Family Setup will launch on Wednesday, Sep. 16 as a free software update. The new feature requires cellular models of Apple Watch Series 4 or later. The Apple Watch SE is available today at the company's website.