Some things are easy to predict for the big biotech. Others aren't.

Five years ago, Gilead Sciences (GILD -1.05%) was near its all-time peak. The stock had skyrocketed more than sixfold. Sales were higher than ever thanks to the company's HIV and hepatitis C virus (HCV) franchises. But the good times didn't last very long.

Gilead's revenue, earnings, and share price sank over the following years. There was a game of musical chairs with the company's executive group, as nearly all of the individuals who led Gilead through its heyday were replaced. In retrospect, it's easy to see why the biotech fell from its perch.

While hindsight might be 20/20, looking ahead to Gilead's future certainly is a lot more difficult. Where will Gilead Sciences be in five years? Here's a very tentative prediction. 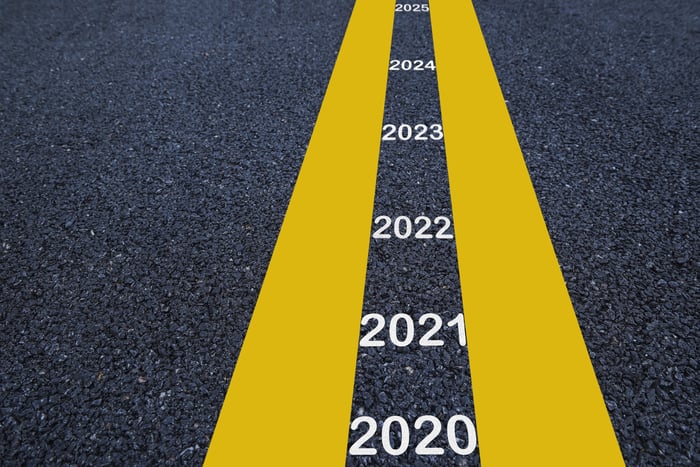 Let's start with the easiest call: Gilead will still be an antiviral juggernaut in 2025. The area that is likely to look largely the same as it does today is HCV. Gilead enjoys a virtual duopoly with AbbVie in the HCV market. That isn't likely to change over the next few years. Granted, the company's HCV franchise won't be a growth driver. However, it's not likely to be a major drag on Gilead's top and bottom lines, either.

I fully expect that Gilead will remain the leader in HIV as well. But I anticipate that the biggest moneymakers in the company's lineup will change. Biktarvy will almost certainly still be the top performer, but longtime HIV winners such as Truvada and Atripla will continue losing market share.

My take is that within five years, lenacapavir will emerge as Gilead's newest HIV star. The company is currently evaluating the long-acting capsid inhibitor in a late-stage study targeting heavily treatment experienced (HTE) individuals with HIV. I think that by 2025, lenacapavir will already be generating significant revenue in the HTE indication. I also think it will likely be well on its way to winning approval for treating the larger HIV population.

Don't forget Veklury (remdesivir), Gilead's COVID-19 therapy. While the COVID-19 pandemic should be well in the rearview mirror by 2025, Veklury could still generate significant sales for Gilead if the novel coronavirus follows the pattern of the seasonal flu.

A bigger player in oncology

I don't doubt that Gilead will be a much bigger player in oncology five years from now than it is today. CEO Dan O'Day has nearly guaranteed that outcome by his business development priorities.

Cancer cell therapies Yescarta and Tecartus will likely win additional approved indications over the next few years. However, it's also possible they'll face more competition in the future.

My view is that Gilead's biggest oncology advances will be outside the cell therapy arena. The company has already completed an acquisition of Forty Seven earlier this year. It has an option to buy out Pionyr Immunotherapeutics. Gilead has also forged partnerships with Arcus Biosciences, HiFiBiO Therapeutics, and Jounce Therapeutics.

The biggest deal of all, though, is Gilead's planned acquisition of Immunomedics for $21 billion. By 2025, I think that Immunomedics' Trodelvy will be a solid blockbuster in Gilead's lineup.

A mystery in other areas

Now for the mystery: I really don't know what to make of Gilead's future in inflammatory diseases or in fibrotic diseases.

At one point, I would have predicted that the company would be a major player in multiple inflammatory diseases by 2025 thanks to its collaboration with Galapagos. But the Food and Drug Administration's rejection of Gilead's regulatory filing for filgotinib in treating rheumatoid arthritis created a lot of uncertainty. I think it's possible that Gilead will be successful in the inflammatory disease space, but I wouldn't bet on it at this point.

It's a similar story in fibrotic diseases. For example, a couple of years ago, I was relatively optimistic about Gilead's chances in treating nonalcoholic steatohepatitis (NASH). Now, my view is that success is iffy.

Overall, I expect that Gilead Sciences will be a bigger company five years from now. I think it will have more diversification across therapeutic categories than it's had in the past. I also have no doubt that the company will continue to offer one of the most attractive dividends in the healthcare sector.

The biggest question in my mind, though, is whether Gilead will be able to beat the market over the next five years. I definitely think that it's possible. I'm unsure, however, if it's probable. That's why after owning the stock for years, I finally sold Gilead recently following its major setback for filgotinib.