So you've opened a brokerage account, funded it, and are ready to find your first investment. It's easy to be overwhelmed by the hundreds of publicly traded companies out there. Not only is the sheer number of companies difficult to wade through, but the idea of making money fast is incredibly tempting.

Unfortunately, when you buy a company with the goal of doubling your investment in the short term, you are less of an investor and more of a gambler. These short-term plays are often incredibly risky, subpar businesses, and will ultimately burn you. Companies like these tend to appear incredibly cheap, and with good reason.

While different parts of a portfolio can accommodate more risky investments, a starter stock should be held for the long term -- at least three to five years, or preferably longer. Your first company should be a cut above the rest, something to be proud of, but where do you start? Be on the lookout for these three traits: 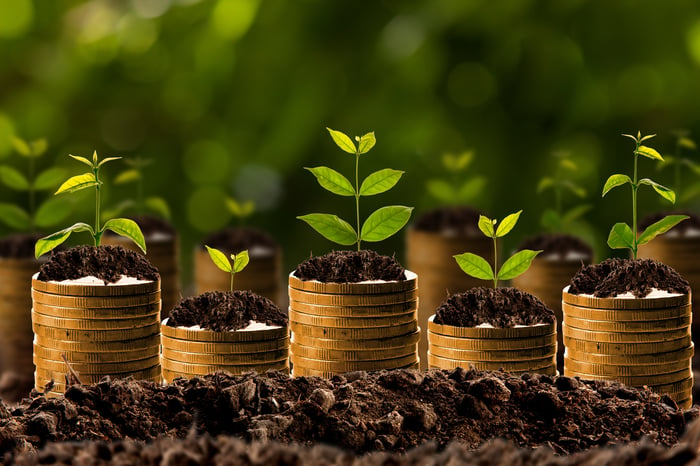 1. Global trends will lift them higher

A starter stock should benefit from global trends into the future. NextEra Energy (NYSE:NEE)is a utility and wholesale power company that generates its electricity from renewables such as wind and solar. NextEra stands to benefit from the same trend (a push for renewable energy) that has steadily weakened ExxonMobil (NYSE:XOM), a company once seen as a prime candidate for any portfolio. You can rest easy when holding onto a starter stock with decades of growth ahead.

Recurring revenue is generated when a company sells to a client repeatedly, turning customers into cash cows year in and year out. Because companies who implement this model have a clear ability to determine future revenue, many of them are able to pay out dividends. Businesses with strong levels of recurring revenue can provide a level of safety for an investor's portfolio..

For example, NextEra Energy's electrical utility customers pay them month in and month out as residents tend to have little or no choice in electrical utility providers. This is very different from the commoditized model of ExxonMobil's gasoline -- which means customers will go wherever the gas is cheapest. The ability for repeat business is another instance where NextEra has Exxon beat.

3. A leader in its industry

A great starter company has a distinguished track record of innovation, marking it as a leader in its field. Companies that pivot with the times become the trendsetters of their industries, which in turn generates value for shareholders. A true leader is more than just the biggest company -- it's the one most willing to grow.

Back to our comparison: Exxon may have great name recognition, but it loses once again to NextEra. For example, scientists have known of global warming for decades, yet Exxon has made no fundamental changes to its business. By comparison, NextEra Energy started shifting more of its power portfolio toward renewables. Shareholders will continue to benefit from NextEra's ability to capitalize on opportunities early.

Don't limit yourself to bargain hunting

When starting to invest, it's easy to get sucked into a subpar company that is trading for a discount, but don't focus on the bargain bin. I love NextEra Energy as a starter company, but it is by no means cheap. However, it has earned that extra valuation due to a long runway for growth from global trends, strong recurring revenue, and a demonstrated ability to adapt. In the words of Warren Buffet, "it's far better to buy a wonderful company at a fair price than a fair company at a wonderful price." Ultimately, you could do far worse than heed the words of the Oracle of Omaha.