Please ensure Javascript is enabled for purposes of website accessibility
Log In Help Join The Motley Fool
Free Article Join Over 1 Million Premium Members And Get More In-Depth Stock Guidance and Research
By Dave Kovaleski – Sep 19, 2020 at 8:30AM

This cheap stock has lots of growth potential.

Among all the high fliers and volatile stocks we see on the markets these days, there are many good stocks that quietly go unnoticed by investors. Consider this an introduction to one of them, Hilltop Holdings (HTH 0.76%).

Hilltop Holdings is a diversified financial holding company based in Dallas that runs PlainsCapital Bank, PrimeLending, a mortgage lender, and Hilltop Securities, an investment bank. The stock is down 22% year to date but is outperforming its peers within the banking industry. More importantly, Hilltop Holdings ticks all of the boxes of a good value stock and is poised for long-term growth. 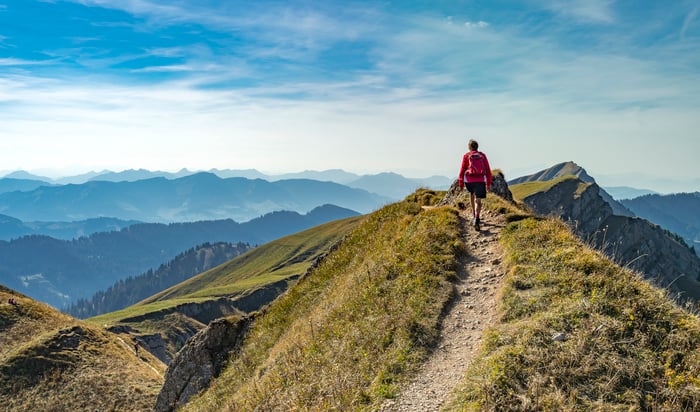 View from the Hilltop

Hilltop saw earnings jump 63% in the second quarter to $97.7 million, or $1.08 per share, from $60.1 million, or $0.64 per share, a year ago. This was due in part to the sale of its insurance subsidiary, National Lloyds Corp., to Align Financial Holdings. The deal closed on June 30 for about $154 million. Hilltop sold the insurance arm to focus on its core banking and securities businesses.

But the company also got a big earnings boost in its mortgage business. The bank generated revenue of $295.3 million from the sale of loans and other mortgage production income -- up 125% year over year. It also saw a 36% increase in mortgage origination fees to $45 million. This was from an increase in mortgage loan originations, which went from $4 billion a year ago to $6.1 billion during the second quarter of 2020. The firm also saw an increase in investment fees from its securities business as revenue climbed to $29 million from $23 million in the second quarter of 2019.

The gains in these businesses more than made up for losses at PlainsCapital Bank, which was dragged down by $66 million in provision for credit losses, up from $34 million a year ago. The overall gains despite this downturn really show the strength of the company's diversified business model.

Good growth at a great value

Analysts project 8% average annual earnings growth for the next five years for Hilltop, which is not surprising given the firm's solid fundamentals and low valuation. The company is underpriced with a book value per share of $25, compared to its roughly $19 stock price. Its price-to-sales ratio is also low at 0.96. Anything below 1.0 means investors are paying less in the stock per unit of sales. The price-to-earnings ratio is also low at around 6.5, which is about half that of the industry average.

These numbers mean a great deal compared to Hilltop's sales and earnings potential. Beyond that, the company is very efficient with a return on assets of 1.87%, which blows away the banking industry average of 0.34%. The ROA is a measure of how profitable a bank is with its assets. Also, the efficiency ratio, which measures a bank's overhead in relation to its revenue, is 54.1% -- down from 55.9% a year ago. The lower the ratio, the more efficient the bank is.

In addition, Hilltop Holdings has excellent liquidity to get through these tough times while continuing to invest in its growth. The company has $6.6 billion in cash, securities, and borrowing capacity with $388 million in cash, which is about four times annual expenses, dividends, and debt service. The sale of the insurance arm certainly improved an already good capital position.

The company has a very successful track record of acquisitions and could be a player again with valuations so low in the industry, as CEO Jeremy Ford explained in the second-quarter earnings call. "Well, I mean, we do have a specific amount of excess capital that we'd like to deploy, largely through bank M&A. We also feel that we need to be patient."

Hilltop Holdings is definitely a stock you should put on your radar. At its current valuation, it's a great buy and should pay off for long-term investors.

Why Shares of Hilltop Holdings Are Surging Today