If you have seen a stock perform well over a certain period of time and not known why, you are not alone. Needless to say, stock performance can be difficult to analyze. But there's usually a pretty clear reason for why a stock is performing well or poorly, and in many cases, it can be tied to real-life events.

If you can really understand key drivers and events in an industry, you will be in a much better position to analyze and predict what will happen to stocks in that sector in the future, or at least what will affect the stocks' movement.

A good example of this was the highly anticipated opening weekend of the action movie thriller Tenet and what this event might say about the movie industry overall at the moment. Let's take a look. 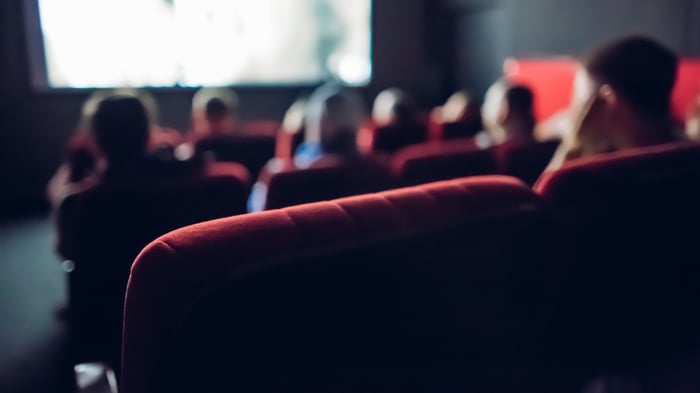 It's no secret that movie theaters have been hit hard by the adverse effects of the coronavirus pandemic on the broader economy. After all, theaters aren't exactly conducive to social distancing, with many people congregating in an enclosed space. Many theaters were also forced to close during lockdown periods across the country and around the world. So the industry, which was already struggling to compete against all the streaming options people now have in their homes, took a big hit from the pandemic.

When AMC Entertainment (NYSE:AMC) announced on Aug. 20 that it would be reopening hundreds of its theaters in the upcoming weeks, the stock quickly soared 10%. That obviously makes sense, because more theaters opening means more ticket and concession sales.

While this was good news, many still wondered whether consumers would feel safe enough to go back into theaters. That's why the release of Tenet was such a big test for the movie industry and, therefore, movie theater stocks. The movie was directed by Christopher Nolan, who has a big following among movie fans for past films such as The Dark Knight, Inception, and Dunkirk. It may not be as hyped as a Marvel Avengers movie, but if people were to go to theaters right now, it would be for a movie like Tenet.

In the U.S., Tenet brought in $20 million in ticket sales during its opening weekend at the box office, according to CNBC. While it's the largest U.S. movie opening since the pandemic began, CNBC said it would have likely done around $35 million to $55 million pre-pandemic.

On one hand, $20 million is not bad when you consider that many theaters were still closed, and many others were limiting capacity to adhere to social distancing measures. AMC stock exceeded $7 per share on the days leading up to Tenet's opening weekend between Sept. 2 and Sept. 4, the highest they had been since February. Since then, AMC shares have come down, but are still higher than they were in July and August.

On the other hand, Tenet did not boost performance at other movies in theaters, a phenomenon that usually occurs because of the release of big movies. Some studios have also since postponed the releases of their big movies, perhaps not pleased with the results of movie attendance. "We have no way of forecasting how long it will take for consumer comfort with indoor movie theaters to return," Rich Greenfield of Lightshed Partners said in a research note after the release of Tenet.

Use real-life events to your advantage

Is there a clear-cut result of Tenet's debut box office weekend for the long-term investing strategy in the entertainment industry? That's up to you.

If you think $20 million was a good number and maybe heard a bunch of your friends who had stayed away from theaters are now going, this could be encouraging. After all, despite a dip since early September, AMC Entertainment stock is still trading on the higher end of where it's been during the pandemic. Or maybe you were disappointed that other movies didn't grab any momentum from Tenet's opening, and are worried about theaters delaying other movies.

Either way, you're using an important real-life event to help you further analyze a stock (AMC Entertainment in this instance) and boost your knowledge of current economic conditions in that industry.