Footwear and apparel titan Nike (NYSE:NKE) announced its fiscal first quarter 2021 results on Sept. 22, sprinting far ahead of analyst consensus expectations in both revenue and earnings per share (EPS). While revenue was down year over year in the most recent quarter ended Aug. 31 because of COVID-19's lingering effects, the drop was only approximately 1%, and the company gained in many other key metrics.

Nike's revenue of $10.6 billion was higher than the consensus analyst forecast of roughly $9.178 billion reported by Zacks Equity Research. Actual revenue delivered a positive 15.49% surprise. Zacks also reports that analysts expected $0.48 EPS, which the actual $0.95 diluted EPS beat by about 97%. Earnings per share were also up 10% year over year. 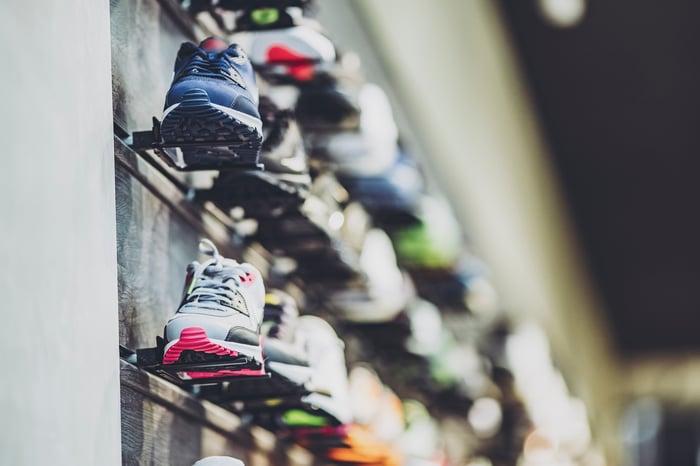 Driven by the ongoing coronavirus pandemic, Nike's digital sales grew by a scorching 82% compared to Q1 fiscal 2020. In comments on the company's performance, CEO John Donahoe noted that both customer loyalty and "digital acceleration are unlocking Nike's long-term market potential."

The company says roughly 90% of its brick-and-mortar sales locations worldwide were open for business by June during the quarter. Customer volume remained lower than normal, however, because of social distancing and the general unease of consumers about in-person shopping. Nike revealed that it slashed selling and administrative expenses by 11%, with advertising costs 33% lower than usual as a result of postponements or cancellations of live sports matches.

Unsurprisingly, investors bid the company's shares up more than 3% before market close. Nike already gained 14.6% during August as the market priced in its robust digital sales and the enthusiastic consumer reception given to its new product releases.