Please ensure Javascript is enabled for purposes of website accessibility
Log In Help Join The Motley Fool
Free Article Join Over 1 Million Premium Members And Get More In-Depth Stock Guidance and Research
By Lee Samaha – Sep 24, 2020 at 8:04AM

A look at why both stocks have outperformed in 2020 and whether it can continue.

FedEx (FDX -2.52%) and UPS (UPS -2.29%) are on a roll. Both stocks have surged in 2020, and analysts and investors are getting excited about the companies' long-term growth prospects. Let's take a closer look at what's going on and whether the strong runs can continue.

Why FedEx and UPS have soared in 2020

The stocks have risen due to a combination of factors. First, the market has recognized that the COVID-19 pandemic has accelerated the shift toward e-commerce purchasing.

Second, the slow recovery in the economy is leading to a gradual improvement in both transportation companies' business-to-business (B2B) revenue -- something likely to help margins, as B2B deliveries tend to be more profitable. 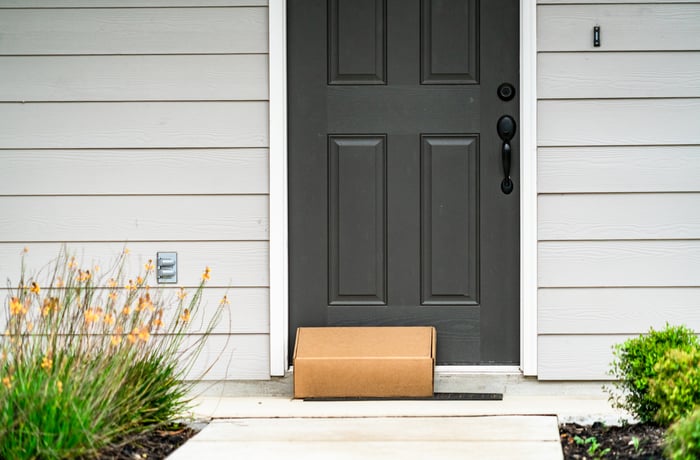 Third, both companies are achieving sequential growth in operating margins, which suggests that they can achieve the aim of expanding margins while growing e-commerce business-to-consumer (B2C) deliveries.

The good news about these trends is that they should continue in the near future, as the economy continues to recover. As such, analysts can be excused for starting to believe that UPS and FedEx are about to embark on a long period of margin expansion. Moreover, free cash flow (FCF) generation is seen as improving as capital spending starts to moderate from the elevated levels necessary to support network expansion to deal with e-commerce growth. 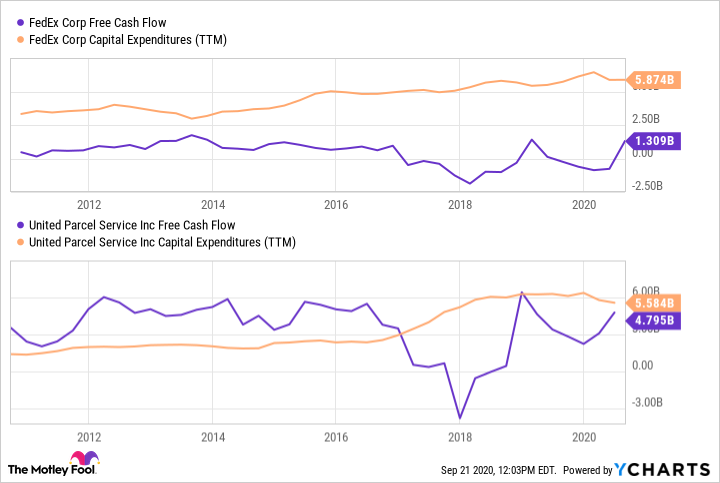 Are the stock price moves justified?

In a sense, they are. The argument supporting that view is that both FedEx and UPS were being heavily discounted over the fear that they wouldn't be able to grow margins, alongside surging B2C e-commerce growth. Moreover, the market was worried about the threat coming from Amazon.com expanding its own delivery services.

In this context, both companies looked like a good value, and there was a strong case for buying the stocks and watching as they climbed a wall of worry. More evidence that the fears were overdone came from FedEx's recent first-quarter 2021 earnings report.

The following chart shows the adjusted operating margin at FedEx ground (the segment where most of the e-commerce-related activity takes place) alongside the year-over-year growth in average daily packages in the segment. Sequential margins have been improving. Furthermore, even though ground margin declined to 11.8% from 12.4% in the same period last year, the 36% surge in ground revenue was enough to lead to a 30% increase in operating income.

FedEx's ground segment is not going to grow revenue at a 36% rate over the long term, but the first-quarter figures are a demonstration of the fact that operating income can grow even if margins compress a bit -- all that's needed is very strong revenue growth. 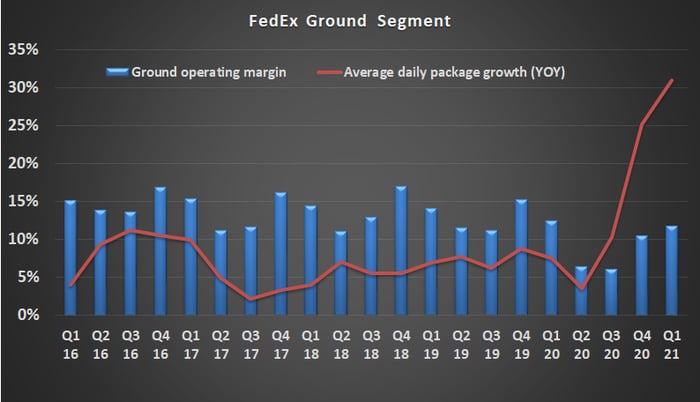 All of that said, it's important to note that there's still a large element of uncertainty around the key issues, namely margin progression and FCF generation. Just as it was premature for the market to assume that FedEx and UPS wouldn't be able to achieve these aims, it's probably also premature to assume that they will be able to grow margin and FCF significantly in the future.

In the end, it boils down to a question of valuations and what you are willing to pay in order to take on the risk/reward profiles of the stocks. The following chart looks at enterprise value, or EV (market cap plus net debt) over earnings before interest, taxation, depreciation, and amortization, or EBITDA, for the two stocks.

For reference, FedEx tends to trade on a lower EV/EBITDA multiple because UPS is traditionally better at converting EBITDA into FCF. In this context. That said, it's better to focus on each stock individually and compare the current and forward multiples with what the stocks traded on in the past.

As you can see below, both stocks looked very cheap earlier in 2020, but that's no longer the case. 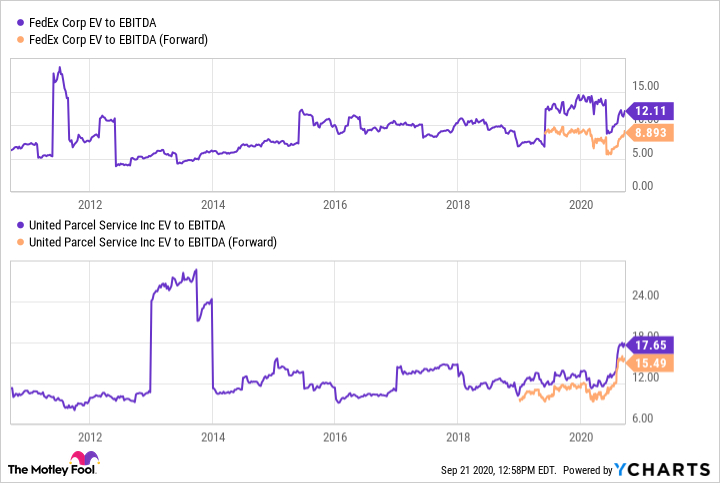 UPS's CFO Brian Newman has already alerted investors to the possibility that its U.S. domestic package margin could be lower in the second half. Meanwhile, on the company's last earnings call, FedEx ground CEO Henry Maier told investors that "we can squeeze more capacity out of this existing network, but we're not going to be able to maintain these growth rates unless we invest in it." In other words, don't be surprised if FedEx has to ramp capital spending in the future.

Both companies look like they have bright futures, but given the strong price rise, it doesn't look like investors are being compensated for the risk that anything could go wrong. As such, on a risk/reward basis, they belong on a list of stocks to monitor in the hope of a price correction, rather than on a "to buy" list right now.