Peloton Interactive (NASDAQ:PTON) is making big moves that are likely to significantly change the interactive home fitness industry. By offering much lower price points for its popular bikes and treadmills, the company is making it more affordable to join the Peloton ecosystem. That's making life difficult for its smaller competitors.

But there's an even more dramatic move to yet to be announced.

Peloton's management has been telegraphing this strategy of bringing down the price points of its hardware, thereby making entry into the Peloton ecosystem more affordable. On the company's fiscal fourth-quarter conference call, founder and CEO John Foley said, "It has long been our goal to democratize access to fitness. And lowering the price of our bike, along with the introduction of our lower-priced Peloton Tread, are important steps to achieving this goal." 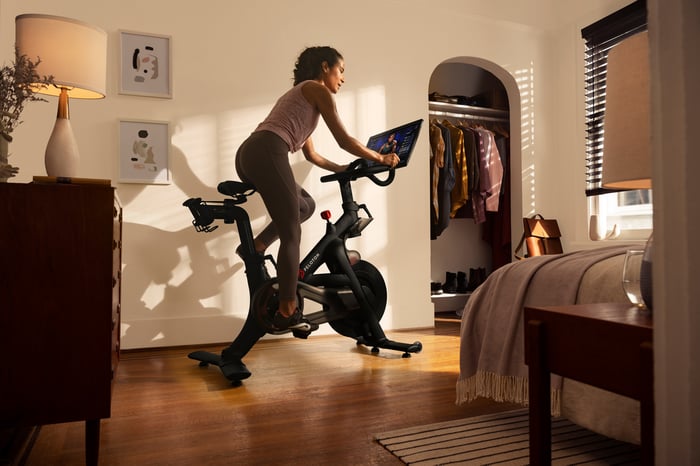 As a result, Peloton will shortly have its "better/best" strategy with the Bike and Bike+ costing $1,895 and $2,495, respectively, and the Tread and Tread+ costing $2,495 and $4,295, respectively. This provides consumers with multiple price points, increasing the pool of potential buyers.

That said, the majority of Peloton's customers finance their purchase with low monthly payments over 39 months at 0% interest. For example, the original Bike can be purchased for only $49 per month for 39 months. That makes Peloton much more affordable than the headline prices suggest.

Given the new higher-end Bike+, Peloton anticipated that some percentage of its Bike owners would want to upgrade. So it developed a program where Bike owners in the U.S. can trade in the Bike for a $700 credit toward their purchase of the Bike+.

This benefits Bike owners who want to upgrade by giving them an easy way to seamlessly do so without having to find a buyer on the secondary market. It also benefits Peloton by driving more sales of the higher-end Bike+. And the company's bikes have a healthy gross profit margin above 40%.

But the really big deal that seems underappreciated among investors is this sets the company up to sell even cheaper refurbished or "Certified Pre-Owned (CPO)" Bikes pretty soon. On the fourth-quarter conference call, Foley said, "And then as you noted, we do have plans to offer a CPO program."

These CPO Bikes are going to be even cheaper than the Bike, which was just reduced $350 to $1,895. While nothing official has been announced, it wouldn't be surprising if the CPO Bike costs in the $1,200 to $1,400 range.

That's a really big deal because the lowest cost of entry into the Peloton ecosystem would go from $2,245 -- the original price of the Bike -- all the way down to perhaps $1,200 in only a matter of months. And if Peloton offers the same 39-month financing offer, the CPO Bike might be available for as little as $31 per month for 39 months. That's affordable for almost anyone who values fitness.

This is key because the biggest barrier to purchasing a Peloton is the price. As management drops the up-front hardware prices lower, more consumers are going to consider and buy a Peloton, thus becoming highly profitable recurring subscription customers.

These price reductions are likely to suck the air out of the industry. Competitors selling inferior products are going to have an even harder time finding customers when Peloton, which dominates the segment, is priced similarly or even cheaper. Those competitors may have to reduce their prices or risk seeing their sales fall even further.

But reducing their prices is only going to make it even harder for them to compete because doing so only hinders their ability to reinvest in content and research and development (R&D), which is the fuel that could improve their offering. In the meantime, Peloton is "doubling its investment in product R&D" this year, according to Peloton President William Lynch.

That's the kind of competitive strategy that could lead to winner-take-all dynamics. Investors should be paying more attention.