After an epic run that sent its stock nearly 800% higher in the 2010s, salesforce.com (NYSE:CRM) is showing no signs of slowing down in 2020. Up 50% year to date as of this writing (after a brief double-digit percentage tumble in March due to COVID-19 worries), the customer relationship management (CRM) software specialist has turned itself into a full-blown platform for digital transformation and is at the heart of many organizations' success in a new digital era.

However, Salesforce is one expensive stock, and many investors may shy away from the company's spend-happy strategy. Here's why it's a buy if you believe the digital world will continue to expand in the decade ahead. 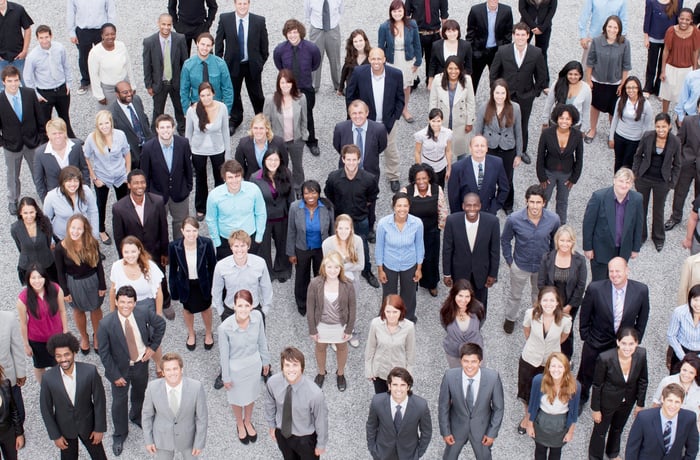 A massive ecosystem designed for the 21st century

Just as productivity software tools like Microsoft Office have become basic staples in the workplace, something similar is happening with Salesforce's family of cloud software for sales and service, which are designed to help an enterprise keep its customers in mind and enhanced with AI-driven insights.

Its recently added marketing and commerce segment is still going strong as well, getting a boost from the massive consumer shift toward e-commerce. And the "platform and other" segment is moving the needle in a big way as recently acquired MuleSoft and Tableau software tools help Salesforce users break down and make better sense of siloed data.

Even backing out the summer 2019 takeover of Tableau (which contributed $648 million in revenue the first half of 2020), the Salesforce platform segment is driving impressive results with a 27% increase over a year ago. And at the end of July, Salesforce had $9.28 billion in cash and short-term securities and just $2.69 billion in debt. Additionally, it had $2.56 billion in strategic investments, which included a $617 million unrealized gain from nCino (NASDAQ:NCNO) -- a banking and financial services operating system built with Salesforce -- completing its IPO in July. Not included is the $250 million invested in the Snowflake (NYSE:SNOW) data warehousing IPO in September, which promptly doubled in value when it made its public debut.

More than just a scrappy torch-bearer for the cloud software movement, Salesforce has turned into a full-blown ecosystem helping thousands of enterprises around the globe navigate and adapt in fast-changing times.

In spite of its size, the company isn't letting its foot off the gas. CEO Marc Benioff and the executive team think revenue will increase at least 21% this year to no less than $20.7 billion -- keeping its long track record of at least 20% growth per year intact for now.

Controversially, a key to the company pulling off its run (even during the pandemic and ensuing recession this year) has been acquisitions. Salesforce is a prolific acquirer of smaller software firms, which it bolts onto its existing operations. The argument against the practice often revolves around the fact that Salesforce frequently uses its stock to pay for purchases. For many tech outfits, this is a dangerous game that dilutes existing shareholders to the point that a larger pie never equates to a larger slice. Up to this point, that hasn't been the case at Salesforce.

Even when including calendar year 2020 -- a period that includes Salesforce digesting several years' worth of blockbuster takeovers, the pandemic, and increased spending to promote further expansion -- free cash flow (revenue less cash operating and capital expenses) per share stands at $3.83. That's a 560% increase over the last 10 years. What this means is even the steady issuance of new shares over the years hasn't reduced a rising bottom-line return for Salesforce owners.

It doesn't make Salesforce a value. On the contrary, many will balk at the more than 64 times trailing-12-month free cash flow the stock currently trades for. It's a valuation that takes into account the high rate of spending to promote further growth, as well as the expectation that said growth will lead to more profits later on. Such a lofty valuation (and a volatile share price that goes with it) simply won't jibe with many investors.

Nevertheless, if you have at least a few years or more to hold, this isn't a grossly overpriced tech giant. Salesforce lies at the heart of the new digital economy and has plenty of growth potential left over the course of the next decade.