Please ensure Javascript is enabled for purposes of website accessibility
Log In Help Join The Motley Fool
Free Article Join Over 1 Million Premium Members And Get More In-Depth Stock Guidance and Research
By Will Healy – Sep 26, 2020 at 7:45AM

A comparison of two e-commerce giants.

At more than $1.55 trillion, Amazon has a market cap nearly 30 times larger than MercadoLibre's approximate $53 billion market capitalization. However, MercadoLibre has delivered considerably faster growth in sales. Given these dynamics, determining which retail stock to choose is likely a measure of its respective businesses as well as the numbers.

How the companies compare to one another

Many consider MercadoLibre the "Latin American Amazon." The Argentina-based online retailer serves most of the territory between Argentina and Mexico. 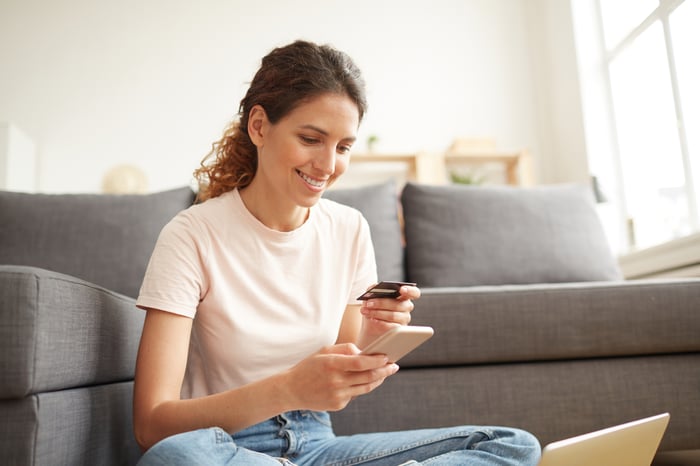 Indeed, much of its success comes from understanding the unique challenges involved with succeeding with e-commerce in Latin America. To address increasing competition from Amazon and Alibaba, MercadoLibre moved quickly to develop its logistics infrastructure.

Latin American countries are primarily cash-based societies. This presents a challenge for e-commerce operations that cannot accept physical cash. For this reason, MercadoLibre also operates in the payments business to make e-commerce accessible to those without bank accounts. This system, called MercadoPago, serves both online and physical stores.

Amazon also operates in the payments business with Amazon Pay. However, Amazon's payment system makes up a much smaller portion of revenue than it does for MercadoLibre. Also, with most of its operations in the developed world, Amazon has not focused as heavily on facilitating customer payments.

Moreover, as a company that operates on six continents, Amazon has not limited itself to one region, and its move into Latin America makes MercadoLibre and Amazon direct competitors.

Amazon also has the advantage of its leadership position in the cloud industry. Despite making up a relatively small portion of the company's overall revenue, Amazon Web Services (AWS) accounts for most of the company's profits.

How the companies compare financially

MercadoLibre stock has dramatically outperformed Amazon over the last five years. This is likely due to MercadoLibre's much higher percentage gains during that time. 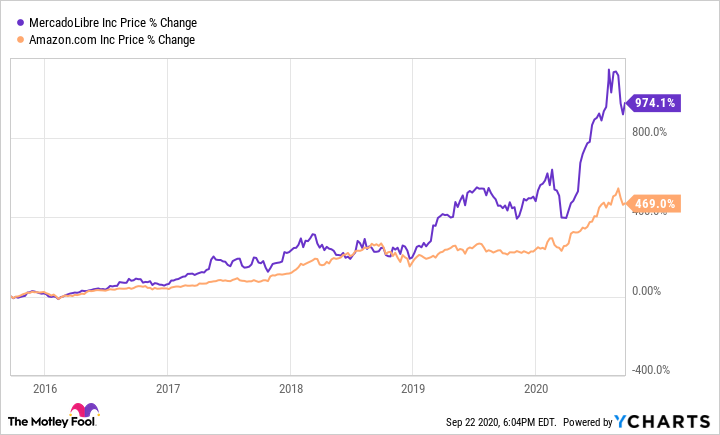 In the most recent quarter, net revenue of over $878 million increased by more than 123% year over year. This helped MercadoLibre earn a net income of $1.21 per diluted share over the same period, a 290% increase from the $0.31 per diluted share earned in the year-ago quarter.

Still, this growth will come at a cost of almost 200 times forward earnings for investors interested in the stock at its current price. Although few would consider Amazon stock inexpensive, the forward price-to-earnings (P/E) ratio of just under 57 may look cheap in comparison.

Amazon experienced a 40% increase in net sales year over year this past quarter. This falls short of MercadoLibre's growth rate. However, at over $88.9 billion in total quarterly sales, it brought in approximately 100 times as much revenue as its Latin American rival and could see a $100 billion quarter soon. Diluted earnings per share for the quarter of $10.30 per share is a 97% increase from the same quarter last year.

Deciding between these two rivals is not easy. MercadoLibre seems to offer approximately triple the sales and earnings growth as Amazon. However, it also sells for around three times the valuation.

Both companies have also moved beyond retailing with alternate businesses. MercadoLibre runs a fast-growing payments business, while AWS allows Amazon to lead the way in cloud computing.

Despite these conditions, I have to give a slight edge to Amazon. Amazon is the leading company in the cloud, and this business provides the company with a relatively high profit margin, earning almost $3.36 billion from $10.8 billion in revenue last quarter. Although MercadoLibre operates a separate payments business, MercadoPago probably does not deliver as high of a profit margin to its company.

MercadoLibre's valuation is also dangerous in the sense that it could suffer substantial multiple compressions should competition hamper company growth. Amazon investors continue to see gains even though it has experienced a gradual drop in its earnings multiple over time. This leaves the company less vulnerable.

Both companies should see massive growth for the foreseeable future. However, given the high cost of MercadoLibre stock and Amazon's bright future in the cloud, Amazon looks like the safer choice under current conditions.