Please ensure Javascript is enabled for purposes of website accessibility
Log In Help Join The Motley Fool
Free Article Join Over 1 Million Premium Members And Get More In-Depth Stock Guidance and Research
By John Bromels – Sep 26, 2020 at 7:45AM

Robinhood's unlikely to solve this big issue, but you can get around it yourself.

Robinhood has legions of fans who swear by the popular trading platform. I can see why: it's easy to use, cheap, and portable. But a lot of users -- and I mean a lot -- aren't happy with the app-based brokerage.

Here's the biggest problem with Robinhood...and how you can make sure it doesn't happen to you. 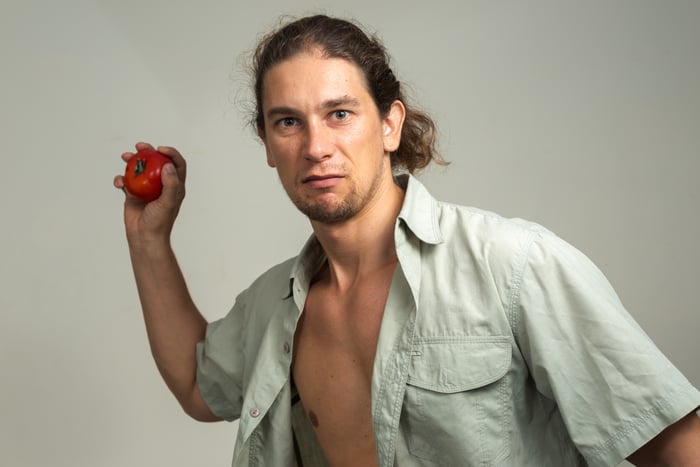 All in the timing

If you're a stand-up comedian or a day trader, timing can make the difference between earning big bucks and getting pelted with tomatoes (believe it or not, I speak from experience). Plenty of investors on Robinhood's site are such day traders trying to leverage the site's zero-fee trades into big profits by rapidly jumping in and out of stocks while avoiding the proverbial barrage of tomatoes the market sends their way.

But many traders feel like the app is letting them down. Here are three different Robinhood user reviews, all posted on the Apple app store on the same day:

"App will only benefit traders who are constantly watching the platform. The auto executions for buying and selling consistently have failures and when you do sell stocks they will never be for the highest rate but for the lowest of when the transaction is completed, on their terms."

"[B]y the time your stocks get [queued] they are way more than when you want to buy them."

Those three investors -- and the hundreds of others who've posted similar complaints -- aren't the only ones who've had timing issues with Robinhood.

On August 31, the first post-split trading day for hot stocks Apple and Tesla, Robinhood went down for about three hours. Inconvenient, to say the least.

This wasn't the first time: the Securities and Exchange Commission (SEC) is investigating Robinhood's 21 (!) outages during March 2020, one of which lasted more than a day. This March, of coure, was the month of the big crash, so being unable to access your account could have proved especially costly.

Speaking of SEC investigations, the agency is also looking into Robinhood's failure to disclose its relationships with third-party high-speed trading firms. Robinhood doesn't place orders directly with stock exchanges, but rather sells them to high-speed firms to be executed. The trading firm can make a profit from the brief delay between the time your order is submitted and when it's settled.

It's a lucrative business for Robinhood, making up an eye-popping 70% of its revenue in Q1 2020. But it could result in investors getting a sub-optimal price, depending on how (and when) the trade is executed. And many Robinhood users clearly think they're getting the raw end of the deal.

Now, Robinhood isn't the only brokerage to derive revenue from high-speed traders, but the percentages are very different: at discount broker Charles Schwab, it's about 3% of revenue, while at E*Trade, it's around 17%. And Robinhood's far from the only platform to experience outages during high-volume periods: Schwab, too, experienced a major outage on August 31, while major brokers Vanguard, Fidelity, and TD Ameritrade all reported delays.For my part, I've never been "locked out" of Robinhood, but I've certainly had issues with the platform's queuing rules. My resulting losses were comparatively small, but they could easily be compounded. One investor claimed the August 31 outage cost him 25% of his portfolio's value. Ouch!

There's a simple way for Robinhood investors to get around these problems: don't try to time the market.

That may sound like a cop-out, but it's actually good advice. High-frequency trading firms can exploit tiny market moves and walk away with big profits, but they have a lot of unfair advantages like sophisticated algorithms, high-speed hardware, and near-limitless capital to invest. Individual investors just can't compete.

You're much better off buying quality stocks at good prices and holding onto them for a period of years (if not decades). Exponential growth will almost always lead to a bigger payoff... and if Robinhood goes down, or if your trade doesn't get processed instantly, it won't have as much of an impact on your overall returns. Not to mention, think of all the time (and anxiety) you'll save when you don't have to be glued to your brokerage screen. You could take up stand-up comedy instead: free tomatoes!

Next time, I'll share how I actually managed to profit off of Robinhood's trading rules (kind of)!

Enjoying John Bromels' Robinhood articles? Here are several others from the series you might enjoy:

I Just Signed Up for a Robinhood Account With $100. Here's What I Learned

Robinhood's "Free Stock" Offer Isn't All It's Cracked Up to Be