Despite recent challenges, positive trends are emerging that point to a brighter future for this leading toy company.

Mattel (MAT 0.54%) was making good progress on its turnaround efforts until the pandemic set the company back. The maker of top toy brands, including Barbie and Fisher-Price, posted a double-digit sales decline last quarter, but the actions management has taken to position the company for long-term growth could make the stock worth considering.

How Mattel is holding up

After a multi-year streak of revenue declines, Mattel stabilized its revenue performance in 2019 as Hot Wheels achieved a record year, and Barbie reached its highest sales in the last six years. But that improvement was reversed by recent store closures during the pandemic, which caused revenue to fall 14% year over year in the first half of 2020 as retailers tightened inventory spending. 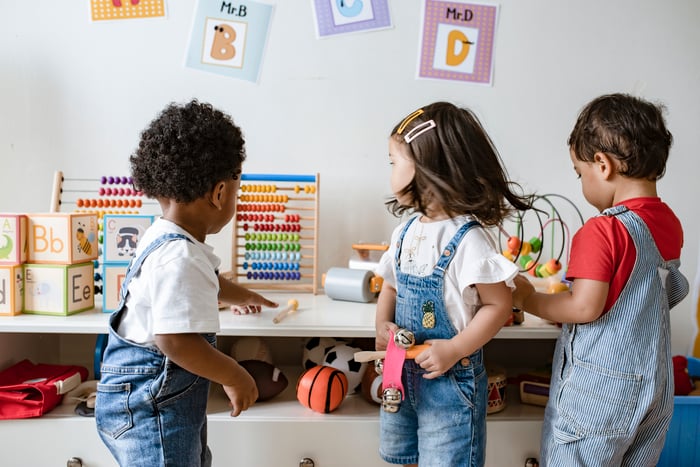 It wasn't all bad news. Consumer demand was strong for dolls and games, and Mattel continued to grow its e-commerce channels. At point of sale, Barbie grew 35% and was the No. 1 toy property in the U.S. for five consecutive weeks during the quarter.

Overall, Mattel reported a 7% increase in Barbie sales in the second quarter, but other brands were down by 20% or more. This hurt Mattel's bottom line, which showed an operating loss of $46 million.

However, that was actually an improvement from the $51 million loss reported in the prior-year period. Credit for that goes to a higher gross margin as management continued its cost-cutting efforts.

The strong point-of-sale trends and improvement in gross margin are positive signs. The wildcard is COVID-19, which still presents uncertainty. But based on current trends, CEO Ynon Kreiz sees a recovery taking shape.

During the second-quarter conference call, Kreiz said, "Based on the momentum we are seeing, the positive [point-of-sale] trends and low retail inventories exiting the quarter, we are planning for strong demand for our products in expectation of an improved revenue performance in the second half compared to the first half, including the all-important holiday season."

Despite the setback of COVID-19, Mattel is still on the right track. Kreiz, who took over as CEO in 2018, has the business moving in the right direction financially.

Beyond the short term, the main headwind Mattel faces is something that all companies are wrestling with in the toy industry, and that is the competition with alternative forms of entertainment. The lifecycles of traditional toys are shortening as children outgrow them at younger ages. Part of this can be explained by the allure of mobile devices and other ways children are consuming digital entertainment.

Despite these challenges, brands still matter, and Mattel has one of the most valuable ones in Barbie. Believe it or not, dolls still resonate with children in the age of iPhones and PlayStations. Sales of dolls are expected to outperform other toy categories through 2024, according to research from Euromonitor. As Kreiz noted, this bodes well for Mattel.

The stock has significant upside from current levels. Mattel sports a much lower price-to-sales ratio than rival Hasbro. But earlier in the decade, when Mattel was reporting a consistent profit, the stock was valued roughly in line with its rival a price-to-sales basis. As Mattel continues its cost-cutting initiatives and begins growing profits, that gap could narrow. 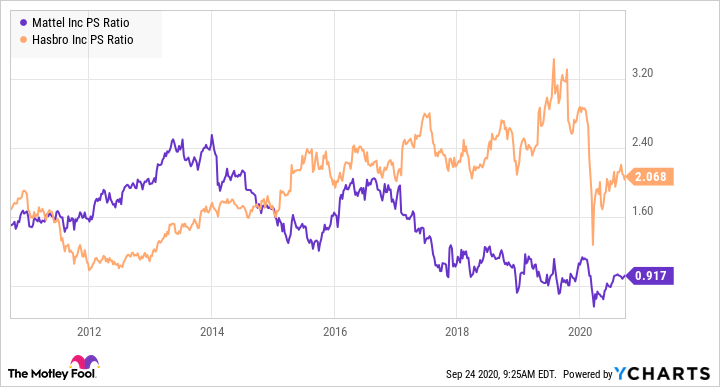 Like Hasbro, Mattel is investing more in digital games, which has been a strong category for both companies. Mattel is currently working on a Hot Wheels mobile game in partnership with Chinese game developer NetEase. Mattel also has several movies in development with top studios, a strategy that has worked well for Hasbro's Transformers franchise.

To be clear, Mattel is not out of the woods yet. COVID-19 remains a fluid situation around the world, and another wave would blunt consumer discretionary spending that is already shaken by higher unemployment.

That said, with the recent point-of-sale trends, improving gross margin, and the growth initiatives in place, I believe the odds favor Mattel emerging as a more profitable toy company over the next five years. Continued progress on these fronts will eventually send the stock to higher levels from these lows, which makes the potential reward outweigh the risk, in my view.

Should You Buy Mattel After Disney Toy Deal?
376%