The initial impact of COVID-19 may be in the rearview mirror, but the coronavirus pandemic hasn't gone away. Indeed, it seems to be picking up speed again in Europe, as well as in the U.S. We may be headed for new lockdown mandates.

Investors not interested in riding out the entirety of another pullback like the one we saw in March have some options. Namely, they could replace some of their more vulnerable growth names with Dividend Aristocrats -- stocks that have increased their dividends for at least 25 consecutive years -- like PepsiCo (NASDAQ:PEP), Chubb (NYSE:CB), and Consolidated Edison (NYSE:ED). These non-cyclical names are in businesses not heavily impacted by the economic environment. And, their income-orientation just may curb some of the volatility another round of the coronavirus could cause. 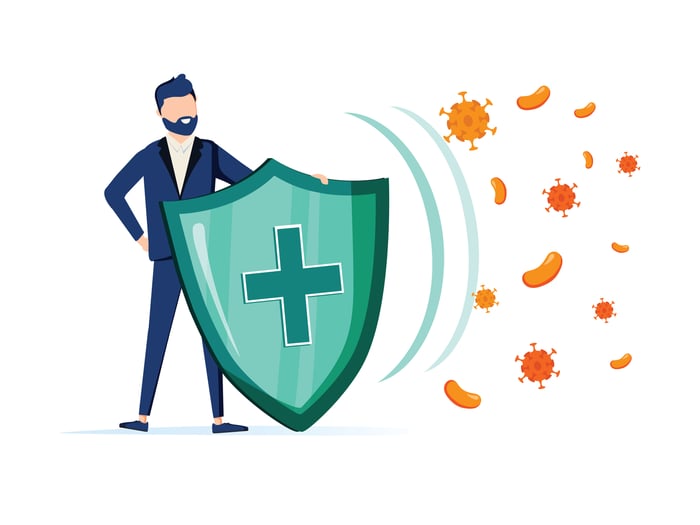 It's true that sales of sugary sodas have been falling steadily for years now, but PepsiCo isn't just Pepsi Cola anymore. In fact, more than half of last year's revenue was driven by its snack foods brands such as Doritos and Cheetos, and its non-carbonated beverage brands like Tropicana and Lipton help offset consumers' ongoing migration toward healthier drink options. This diverse product portfolio is a big part of the reason the company's been able to regularly grow its quarterly top line since 2017, until COVID-related shutdowns presented logistical challenges.

Those challenges are temporary, but the clever adaptations PepsiCo has made will have their place in a post-COVID world. For instance, in May the company launched www.pantryshop.com and www.snacks.com to sell pre-packaged assortments of breakfast food and snack foods directly to consumers. Earlier this month PepsiCo unveiled a new drink called Driftwell that may appeal to the anxious. Driftwell is meant to help people sleep and relax, addressing the crowd at the other and of the caffeination spectrum.

The company's upped its dividend payout for 48 consecutive years now.

Chubb has a size, diversity advantage

For the unfamiliar, Chubb is the world's biggest publicly traded property and casualty insurance company, offering all sorts of coverage solutions for individuals as well as consumers, protecting farms, film stars, and corporate firms, just to name a few. It's not just a P&C play, though. Chubb is also exposed to the life and health market, and the benefits market. This degree of diversity helps smooth out the company's results, which have allowed the insurer to boost its payout every year for the past 27 years.

Insurers have been an increasingly tough group for investors to get excited about. Claims regularly rise, but data posted by McKinsey earlier this year confirms what many suspect -- insured losses are growing in a big way, and an increasing number (and intensity) of hurricanes is causing much of that growth. And this year, business continuity claims have soared because of coronavirus-related shutdowns.

The industry as well as Chubb have been able to adjust, though. The Marsh Global Insurance Market Index shows a corresponding rise in premiums since 2017, with commercial insurance prices growing 19% year over year just during Q2. Chubb's revenue growth hasn't been quite as consistent as March's measure of coverage costs, but it's been close. This year's claims simply serve as the basis for next year's rates, with a bit of profit opportunity baked in. Like it or not, institutions and individuals have to have insurance.

Finally, add utility company Consolidated Edison to your list of Dividend Aristocrats that should shield you from any measure meant to tamp down a fresh coronavirus outbreak.

You know the drill. People might skip a trip to the mall, or forego a family vacation. But they're not going to go without electricity. Utility companies generally pay their shareholders dividends as reliably as utility customers pay their monthly bills. Consolidated Edison is particularly reliable in that regard, having not only made dividend payments each and every quarter for decades, but boosting that payout every year for the past 46 years. That's the longest uninterrupted stretch of dividend growth for any utility stock in the S&P 500. The current yield of 4.1% isn't too shabby either, and with a payout ratio of only three-fourths of its earnings, there's some fiscal wiggle room to ride out any rate volatility.

Consolidated Edison is preparing itself for what could be another 46-year run of dividend growth, too. Earlier this month, CEO John McAvoy announced he'd be stepping down from the role after 40 years with the company. He'll be replaced by Tim Cawley, who is currently serving as the president of Consolidated Edison Company of New York. McAvoy commented in the official notice from the company, "Tim is an innovator in the clean energy and renewable space and will ably guide the company into the future."